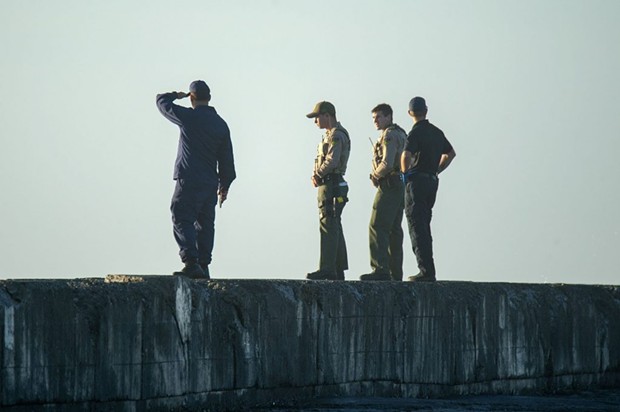 UPDATE:
The Coast Guard has suspended the search for a 19-year-old Humboldt State University student who was swept off the North Jetty Monday afternoon while fishing with friends.

KeyMaan Stringer, who was from Los Angeles, was last seen about 4:30 p.m. when he went to free his line and was hit by a wave. Another man went into the water after Stringer but was unable to reach him.

According to a release, the Coast Guard traversed “160 square-nautical miles for 16 hours in a continuous effort” in an effort to locate Stringer. The search was called off just before 10 a.m. today.

The 19-year-old Humboldt State University student swept off the North Jetty on Monday has still not been found, the university announced this morning in a statement reminding the campus community that counseling services are available.

KeyMaan Stringer was fishing with friends around 4:30 p.m. when he was washed off the rocks by a wave while trying to free a line. Another man at the scene jumped into help but was unable to reach him.

The HSU release states that the Los Angeles resident was still missing “despite an intense rescue effort involving the U.S. Coast Guard and other first responders.” Several resources are available for those who are struggling with the grief or otherwise overwhelmed by the circumstances.

Read the full HSU release below:


Humboldt State University is continuing to offer support and counseling for those in our campus community following yesterday’s accident at the North Jetty in Eureka.

The student involved the accident was KeyMaan Stringer, a 19-year-old freshman from Los Angeles. He has not been found, despite an intense rescue effort involving the U.S. Coast Guard and other first responders.

For those who are struggling with grief or otherwise, know that help is available. Students can contact Counseling & Psychological Services at 707.826.3236. The Dean of Students Office can also be reached at 707.826.3504. Staff or faculty seeking additional support may utilize the Employee Assistance Program at 707.443.7358. And, all students, staff, faculty and community members are also encouraged to please share the National Hotline 1-800-273-TALK (8255), a 24/7 free and confidential resource.

We will keep the campus community updated as we learn more.