It’s unlikely for one who lives in Humboldt County to be unaware of a certain industry, which shall here remain nameless, and for which the county is known somewhat beyond its borders, and which recently became legal in our state, for the subject naturally becomes a part of many conversations. I could discuss it in one context or another, but hasn’t that been done? And can’t others do that? For fun, I decided to take a look at it from a particular angle: a silhouette of it against the stars.
A Humboldt Skyline: Pseudotsuga menziesii (Douglas-fir) and Cannabis sativa (the herb) silhouetted against the Milky Way and stars as they slowly revolve over the course one hour and 40 minutes.


Humboldt County is more than any one thing, so I found a position that would give me a skyline of both Pseudotsuga menziesii (Douglas-fir) and Cannabis sativa (the herb), the juxtaposition of which, depending on one’s point of view, might be either ironic or fitting. I set the camera to take a series of 169 photos of that skyline over the course of an hour and 40 minutes, from which I made a short 12-second time-lapse movie that shows the motion of the stars as they swing across the sky on their path around the Polaris, the North Star, which is the star that sits very close to Earth’s northern polar axis.

We don’t notice it when we look up at the night sky, but we know the stars are slowly marching across because they rise and set, caused by Earth’s rotation. To the west, the stars sink more or less straight into the horizon. But north of that point the stars arc around Earth’s northern polar axis, near the North Star, as we rotate beneath them. South of that point their paths form the mirror image as they revolve around Earth’s southern polar axis. The time-lapse video shows the northern stars in their curved path, though Polaris (the North Star) is out of view to the right. In the still image with the long star trails one can see how far the stars traveled across the sky. 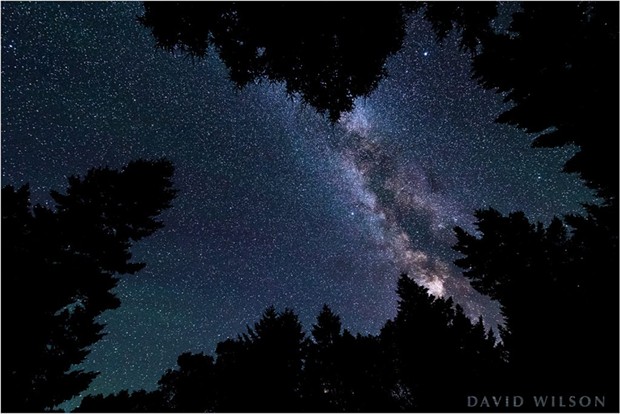 The other still image shows the overhead sky through an opening in the canopy of tall Douglas-firs. Photographing over the course of a few minutes, the camera caught the stars making short trails as they moved a short distance. You’ll note that the upper stars arc around a point out of the frame above the image; they are making their way around our northern polar axis. The lower stars are traveling in the other direction, around the southern polar axis. That area separating the two arcing paths is called the celestial equator.