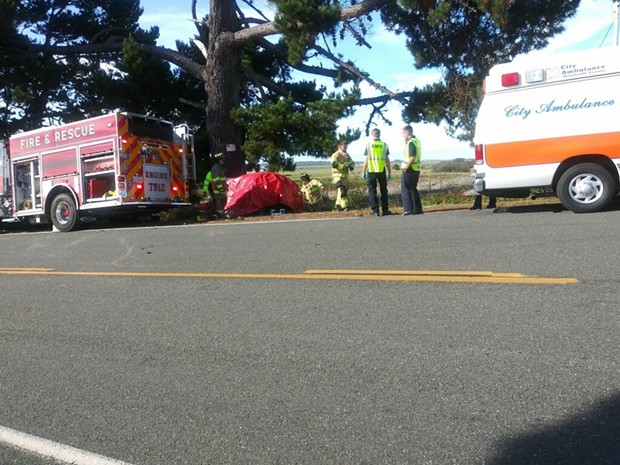 UPDATE:
A 75-year-old Fortuna man died after his car went off the Eel River Drive just before 11: 20 a.m. today and hit a tree, according to the CHP.

The crash near Copenhagen Road killed driver Steven Laurilliard. No other vehicles were involved.

A fatal car crash occurred around 11:20 a.m. after a silver Toyota went off Eel River Drive near Copenhagen Road in the Loleta area and crashed into a tree, according to multiple media reports and the CHP incident page.

The crash marks the second traffic-related death today. Early this morning, a badly injured pedestrian was found on northbound U.S. Highway 101 near Sixth Avenue in Westhaven following an apparent hit and run. The man died after being taken to St. Joseph Hospital this morning.


On November 2, 2018, at approximately 11:17 AM, the California Highway Patrol received a call of a vehicle collision on Eel River Dr., at Copenhagen Rd. The caller reported that a vehicle had collided with a tree and the driver appeared to be deceased. Emergency medical personnel responded to the scene and confirmed the male driver, 75 year old Steven Laurilliard of Fortuna, was deceased. CHP officers investigating the collision observed that Mr. Laurilliard's vehicle had traveled off the west roadway edge and collided with a tree, causing major damage to the vehicle. Alcohol or drugs are not considered to be a factor in this collision. The California Highway Patrol Humboldt Area is investigating this collision and asks that anyone with information please contact the Humboldt Area Office of the CHP at 707-822-5981 or email humboldt_area.humboldt_area@chp.ca.gov.