Signboard Fire Near Hoopa Continues to 'Creep and Smolder' 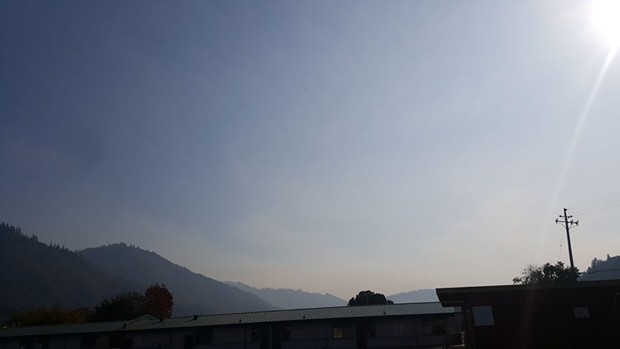 The “low-intensity” Signboard Fire is continuing to “creep and smolder” in national forest land near the Tish Tang Ridge, growing to 53 acres, according to a release from Six Rivers National Forest.

An “inversion of fog and smoke” prevented helicopter water drops on the blaze, which began Nov. 13 when a prescribed burned escaped its boundaries. Moving through steep, rugged terrain, the focus has been on creating firelines to keep the Signboard Fire contained.

There have been no evacuations, closures or structures lost, according to the release.

Read the release from the Six Rivers National Forest below:


HOOPA, Calif. – Good indirect progress was made yesterday on the Signboard Fire. Dozer line connecting to Road 8N03 along Tish Tang Ridge on the west side has been completed; line on the east side is about 50% done and should be finished today. Road brushing by hand crews continues at the north end along Road 8N03 near a reservation high value tree plantation. Due to yesterday’s inversion of fog and smoke, helicopter bucket drops in the steep, inaccessible canyons were limited. Once today’s inversion lifts, aerial efforts in these canyons will continue today.

An overnight infrared flight has provided more accurate details of the fire’s perimeter and activity and shows a push to the northeast. When the inversion lifts, the fire is visible from Highway 96 north of Willow Creek looking into Hoopa Valley. The pleasant Fall weather will continue with increasing humidities heading into the weekend; much-needed precipitation is expected early next week.
Originally the 13-acre Tish Tang Prescribed Fire, the Signboard Fire was declared a wildfire on Tuesday, November 13, when it left reservation lands and crept on to National Forest System lands. This low-intensity fire continues to creep and smolder through brush in steep, rugged terrain near Tish Tang Ridge. To minimize risk, firefighters will avoid the steep terrain by constructing indirect firelines on ridges to the east and west of the fire.