In 1964 a perfect storm of snow melt and heavy rains caused a historic flood in Humboldt County and the greater Pacific Northwest. Along the Eel River watershed, the raging flood waters wiped out roads, bridges, and entire communities. U.S. Highway 101 was submerged at some points. That was before my memory, and now most of its effects have been blurred by the passage of time, but there are still some physical reminders commemorating the event visible from the road.

You may have seen the high water marker on the west side of U.S. Highway 101 a little north of the Salmon Creek exit in Southern Humboldt. Another mark sits atop a pole on the Avenue of the Giants at Weott; almost out of sight at the top of the tall pole is a marker showing how deep the Avenue was beneath the surface of the flooding Eel River.

The history and mystery of this past reminder of nature’s awesome power drew my interest to the marker at Weott. I doubt that I’ve ever passed by this marker, nor the one near Salmon Creek, without at least glancing at it and marveling for a moment at the sheer volume of water that the flood had sent gushing through these places continuously for days, all up and down the river, and all over the region. That is a mind-bending amount of water pouring from the skies. 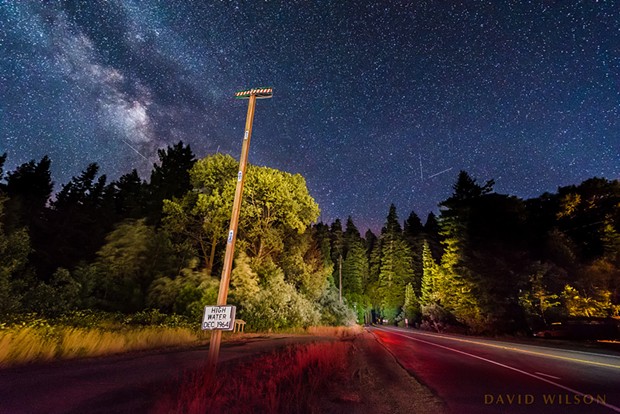 If people go through phases in their art, I am definitely deep into a night phase. When I am interested in photographing something, my mind inevitably begins thinking about how it might look at night and what might make it an interesting image under the night’s magical light. Light is unique at night, offering the potential to make striking and unusual photographs. I know that compelling photographic opportunities abound in the daytime as well, for I see and appreciate daylight images all the time. But for whatever reason, I need to go shoot at night, to play with long exposures, perhaps paint my own light into the scene or watch as the lights of passing vehicles add their own strokes of luminance. The bummer is that I seem to have a daily need for sleep that can be most inconvenient. Still, I love both taking the photographs and then working with them later, as any creative photographer might have done in the darkrooms of old, and as I once did, only now we mostly use digital tools.

Where does the light come from at night? It’s never the same. There is a little star shine at all times, which is enough to see well enough to walk around after one’s eyes have grown accustomed to it, but it is very faint and next to insignificant in my landscapes. The moon is an inconsistent light source in night photography, unlike the sun in the daytime. Because the moon’s phases change gradually each day, so does the amount and quality of its light, both on the landscape and in the lightness of the sky. Thus the night has phases of its own, following those of the moon, making each night just a little different.

Light also comes from both stationary and mobile ground sources, again unlike the daytime. The colors of the lights may vary widely. Some lights are cool, some warm, and some are extreme in intensity or color, such as the red of a car’s taillights or the brightness of its headlights. Some night light sources are points in the frame, some are streaks and others bounce their glows upon the landscape. A passing car will add a splash of light to the photograph here or there as it travels by, while others will add different strokes, filling in new areas, perhaps in a warmer or cooler tone. Or again I may add light of my own. My enjoyment is in the process of gathering these threads of light and creating images from the scenes they illuminate.