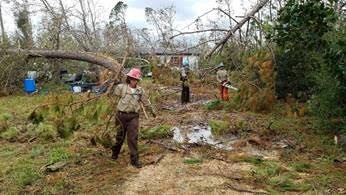 Fortuna crew members of the California Conservation Corps are scheduled to head home today after helping out with damage caused by Hurricane Michael in Florida.

According to a release, the corps members mainly worked in Bay and Gulf counties, two of the hardest hit by the massive storm that killed at least 60 and wiped an entire town off the map.

“You feel heartbroken that you cannot do more,” Fortuna corpsmember Kali Madding said in a release. “These communities need more help from everyone in the country.”


The Fortuna crew was joined by another from San Diego, which worked six days a week for the last month, helping to remove debris and shield the homes that remained from further damage.

“There are homes we’ve come across where we’re removing trees just to give them access to their property to collect their things,” Madding said. “But as far as their house goes, it’s obliterated. It’s completely destroyed.”

Read the full CCC release below:

Corpsmembers from the CCC Fortuna Center removed hazardous and downed trees from homes and property.

“There are homes we’ve come across where we’re removing trees just to give them access to their property to collect their things,” said Fortuna Corpsmember Kali Madding. “But as far as their house goes, it’s obliterated. It’s completely destroyed.”

In addition to tree removal, Corpsmembers from the CCC San Diego Center draped homes in blue tarps to shield them from additional rain. The tarps allowed some residents to return to living in their homes.

Corpsmembers put in six-day work weeks, in miserably humid and unpredictable weather. However, the conditions did not dampen Corpsmembers’ enthusiasm toward helping those in need.
“A lot of us would like to stay longer if we could,” said San Diego Corpsmember Rebecca Voorhees. “We feel like we’ve done a lot, but we would love to stay and continue helping the residents here. You feel badly for them, but you also feel like you’ve done something good at the end of the day.”

Corpsmembers mostly worked in Bay and Gulf Counties, two of the regions hit hardest by the hurricane. The work was especially challenging, even for Fortuna’s more experienced sawyers.

“The debris we’re working around is nothing like we’ve worked with before,” Madding said. “The trees, they are no joke. The way they are jumbled on top of each other, it’s a different experience. We are taking precautions and being safe. And we’re all getting better at cutting.”

Corpsmembers said that seeing the damage on television does not do it justice.

“You just feel so bad about everything that happened to the residents,” Voorhees said. “We always want to do more, but there’s a lot of work that needs to be done.”

“You feel heartbroken that you cannot do more,” Madding said. “These communities need more help from everyone in the country.”

As they assisted the natural disaster victims in Florida the crews also kept a close eye on the wildfires in California. While the crews are excited to see their families soon, they’re prepared to help their neighbors dealing with wildfires.

The CCC crews were dispatched as part of AmeriCorps’ natural disaster response mission. The California crews joined conservation corps from throughout the country in responding to Hurricane Michael.

About the CCC
The California Conservation Corps is a state agency offering young men and women a paid opportunity to improve California's natural resources and communities. The CCC also responds to emergencies such as fires, floods, weather and agricultural disasters.

Created by Gov. Edmund G. Brown Jr. in 1976, the CCC is the oldest and largest conservation corps in the nation.

The CCC has Corpsmember openings every month for young adults ages 18 to 25 and veterans to age 29. For information on joining, call 1-800-952-JOBS or visit ccc.ca.gov.