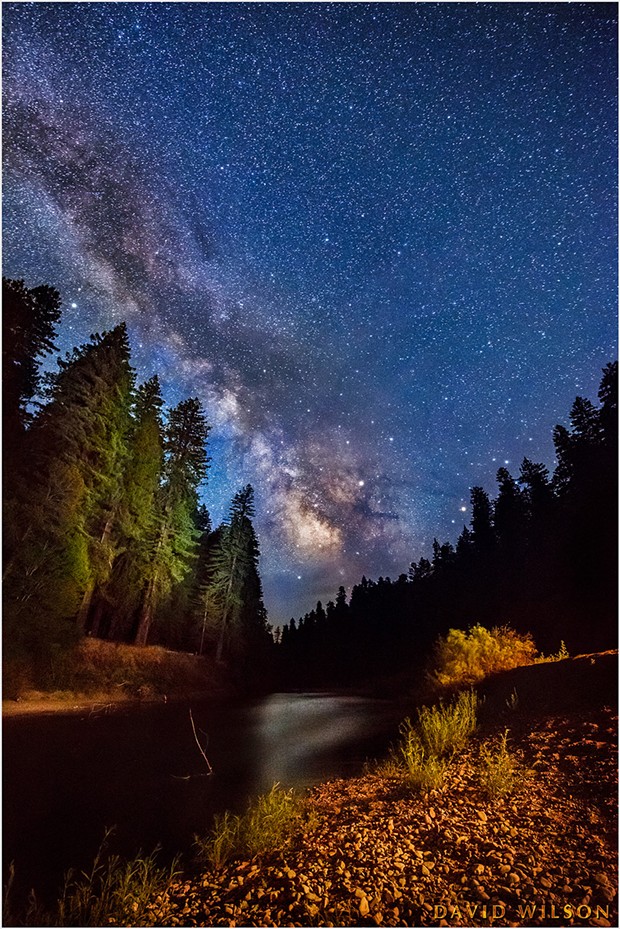 The word “photography” literally means “light painting” and there is something about taking that idea and actually adding my own strokes of light that appeals to me. Nighttime gives me the opportunity to make images that are illuminated in ways we don’t usually see, whether from moonlight, artificial ambient light sources or light that I may apply to an area myself. Let me share with you one such light-painted image from a dark summer’s midnight in Southern Humboldt.

Coursing among giant redwoods, the South Fork Eel River slipped quietly by the California Federation of Women's Clubs Grove, while the Milky Way made its silent passage across the sky. Not a human soul was about that night after midnight, though during the day this Humboldt Redwoods State Park spot on the Avenue of the Giants is very popular. I had seen many people enjoying the river and day use area of the Grove when scouting here that afternoon to see how the Milky Way would lie at night.

One of the reasons I am drawn to photographing the night is for the opportunity it gives me to add my own touch in the form of painted light to create something unique. Because it is dark, I have to leave the camera shutter open for extended periods, and that gives me time to apply light selectively to areas of a scene, often using a flashlight. Such was the case with this image.

To make this photograph I left the shutter open for 30 seconds, which was a long enough exposure to capture a lot of stars, bring out the detail in the Milky Way, and to give me time to use my light to illuminate the foreground and the trees across the river. It can take some time to paint light into a scene, particularly when some of it is as large and distant as those redwoods. While the shutter was open, I had half a minute to run up the river bank a little way and use my flashlight to illuminate both the foreground and the distant redwoods across the river. My idea was to illuminate it from as far to the side as I could in order to highlight the foreground texture with interesting shadows, particularly with the small rocks along the river bank.

If you would like to see this image in person, and many others from our beautiful nighttime North Coast, I have a show hanging through December at Arts & Drafts on 422 1st Street in Eureka, California, on the Waterfront. There will be an opening that I’ll attend on Saturday, Dec. 1 at 6 p.m. for Arts! Alive. The gallery typically has evening hours during the week.