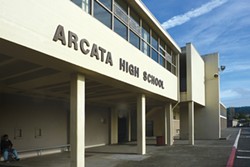 Arcata High School was put on precautionary lockdown this morning following an incident on nearby Heather Avenue near Foster Avenue that began around 8:10 a.m.

One person received a gunshot wound to the leg, according to an initial report on the scanner. The suspect who was in a red Chevy pickup with two others was detained.

According to Arcata Police Lt. Bart Silvers, Arcata High school has “been notified to lift the lockdown.” He said the incident occurred several blocks from the school.


“Several people are detained,” he said. Then added that officers are are still sorting out what occurred.

One person was injured and taken to the hospital. “It does not appear to be life threatening,” Silvers said.

Editor's Note: This report first appeared on kymkemp.com and is reprinted with permission.