'This is a Human Being': A Volunteer Rescue Team Dropped Everything to Recover a Body Found in the Eel River

The recent rains had pushed the waters of the Eel River higher and the sound the cold current rushing over rocks was loud when Southern Humboldt County Technical Rescue team member Thomas Norris met up with Talia Rose yesterday near the Humboldt-Mendocino county line.

“She had messaged us on Facebook about 12:45,” explained Norris, a Caltrans worker who volunteers his time with the team.

Rose, a wildlife photographer had seen what she initially thought was the carcass of a deer. She had even posted about the encounter on her local nature page. But then, a comment made her second guess what might have been lying in the water. She reached out to the SHCTR team who are well-known for their work locally.

The two met up and walked up the river. When they arrived, Norris said he could tell it was a body. “I tried to wade over but it was too deep,” he said.

Meanwhile, four other members of the SHCTR team were arriving. Diana Totten and Aurora Studebaker, both Southern Humboldt businesswomen, were there soon after Norris.

“We waited until Kai [Ostrow] and Shawn [Studebaker] brought the rescue rig on the trailer,” Norris explained. 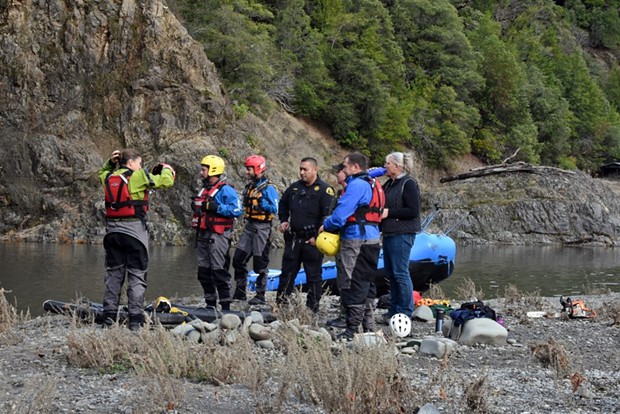 As the team prepared to enter the water, husband and wife Aurora and Shawn Studebaker were making arrangements by cell phone for their children and their businesses. “They got to drop everything they do,” Norris said. “They are on the phone trying to get someone to take the kids home. Trying to conduct business. A lot of planning. They’ve got young kids, so you can’t just leave them by themselves.”

Meanwhile, Norris said, Totten, who runs a cannabis consulting business and has longtime local knowledge because she was born here, was determining on which side of the county line the body had been located. Totten would stay on shore helping the team troubleshoot with the correct local law enforcement and landowners, if necessary.

The Mendocino County Sheriff’s deputy was amazed that the team were all volunteers, Rose said.

“The body was in a somewhat serious state of decomposition,” Norris explained. And the body was intertwined in a downed tree. “It took a long time to disentangle him,” he said. And all the while, Norris said, the team was holding in their mind, “This is a human being. … We’re going to treat the body like it is our family and treat it with respect and dignity.”

Each step they took while immersed in chilly water had to both preserve evidence in case the man’s death was a crime and honor the spirit of the person who had died, Norris explained.

Once the man’s body was freed, the team maneuvered him carefully into a body bag. “Then we secured him onto our raft,” Norris said, “and rafted him downstream to Cooks Valley, where we unloaded him and the coroner took custody.”

Norris confirmed that the equipment used was mostly purchased by the volunteers. “We raise money to buy equipment,” he explained. Some of it, like the pair of gloves he tore through in the frigid water, will probably be replaced at his own expense. Other equipment is purchased through fundraisers, mostly run by the same group of volunteers who staff the team.

Once the man’s body had been transferred to the Mendocino County coroner’s custody, the team isn’t through working. “Afterward, it takes two to three hours to clean all of our equipment,” Norris explained.

Now that the unknown man’s body was in the care of another team in charge of determining who he was, the SHCTR team members go back to their busy lives and complete other obligations that they left undone in order to give their time to helping their community and give closure to the family of the man that died.

In all probability, they’ll never meet the relatives of the dead but every time they recover a body, they will help heal a little the anguish of those left behind.

Editor’s Note: This story first appeared at www.kymkemp.com and is reprinted here with permission.