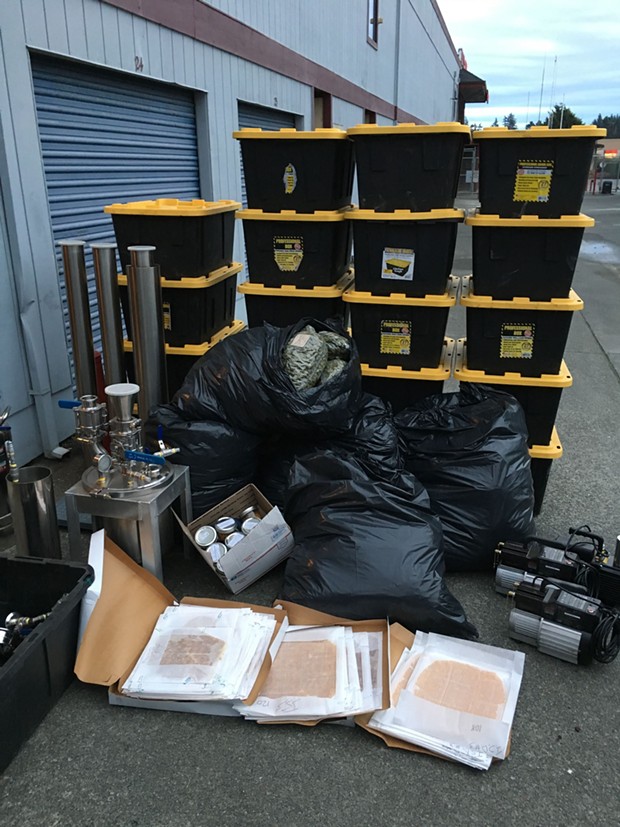 According to a release, deputies found a storage locker with the keys in the lock but no one who appeared to be associated with the unit. To make sure someone was not inside in need of help, they made entry to find “components associated with a butane hash oil (BHO) lab,” the cannabis and 26 pounds of hash oil product.

No one has been arrested and the case remains under investigation.


Read the full release from the HCSO below:


On Dec. 8, 2018, at about 1:30 p.m., Humboldt County Sheriff’s deputies were dispatched to a self-storage facility on the 1600 block of Sutter Road in McKinleyville for a duress alarm activation.

Upon arrival, deputies found one storage unit with keys still in the lock but were unable to locate anyone associated with the unit at the facility. Deputies made entry into the unit to check for a subject in duress. Deputies did not locate anyone inside the unit, but did observe components associated with a butane hash oil (BHO) lab and smelled a strong odor of cannabis.

The Humboldt County Sheriff’s Office Drug Enforcement Unit was called to the scene to investigate. While executing a search warrant on the unit, deputies located over 327 pounds of cannabis bud and over 26 pounds of butane hash oil product.
This incident is still under investigation. No arrests have been made at this time.