A Gift of Glasses: Three Eureka Men See the World in a New Hue (Video) 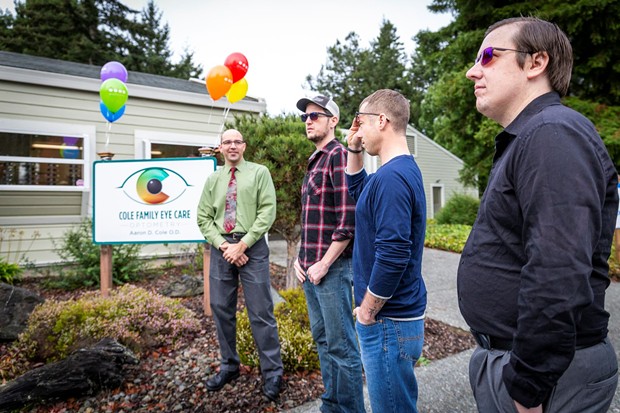 When Brendan Hartsell put on the red-tinted EnChroma glasses for the first time, he didn’t say a word. He simply looked around — first down at the green bushes nearest to him then at a pair of blue and pink balloons tied to a sign. A nervous grinned spread over his face.

Hartsell was one of three Eureka residents who gathered at Cole Family Eye Care on Tuesday to try out and take home the specially engineered lenses which allow people whose eyes overlap the hues of red and green to see clearer, more vibrant colors

“Any immediate responses?” optometrist Aaron Cole asked after the group donned the glasses in front of him as they appeared to be taking in all of the new shades of the world.


Hartsell pointed to the balloons and said he can actually tell the difference between the two colors. “Before they were basically identical,” Hartsell said.

“It’s intense,” Hartsell continued. “It’s really different and amazing, seeing all the colors I didn’t even know were there. And I’m just excited to see it all in better light and to see what I can see.”

After the three explored their surroundings, by walking around what other people would see as an ordinary parking lot, they honed in on minor details like the color of Cole’s tie, the different shades of green in the bushes and the vibrant red of the fall-colored leaves.

“Do you see any difference in the leaves there?” Cole asked as he pointed to some on the ground.

Also there were Eric Boardman and Eric Headstrom, both county of Humboldt employees. Boardman, an information systems technician, said being able to see color will change how he works.

“It will definitely be helpful with my job. I mean, we deal with cables that are color coded and that kind of thing,” he said.

Even though the glasses will help with work, Headstrom said he is more excited about the life experiences that will come with them. He said his family has been too busy to make any plans just yet but he planned on them all going out to celebrate.

“Maybe we’ll watch a movie or something in the theater. That should have vibrant colors that I would have never been able to tell the difference on before,” he said.

Tuesday's event comes one month after the posting of an emotional video showing SWAP Farm manager Jeff Dishmon seeing color for the first time after Correctional Deputy Samantha Freese and other deputies pitched in to get Dishmon the glasses — a story that not only tugged on local heartstrings but was also picked up by the national media.