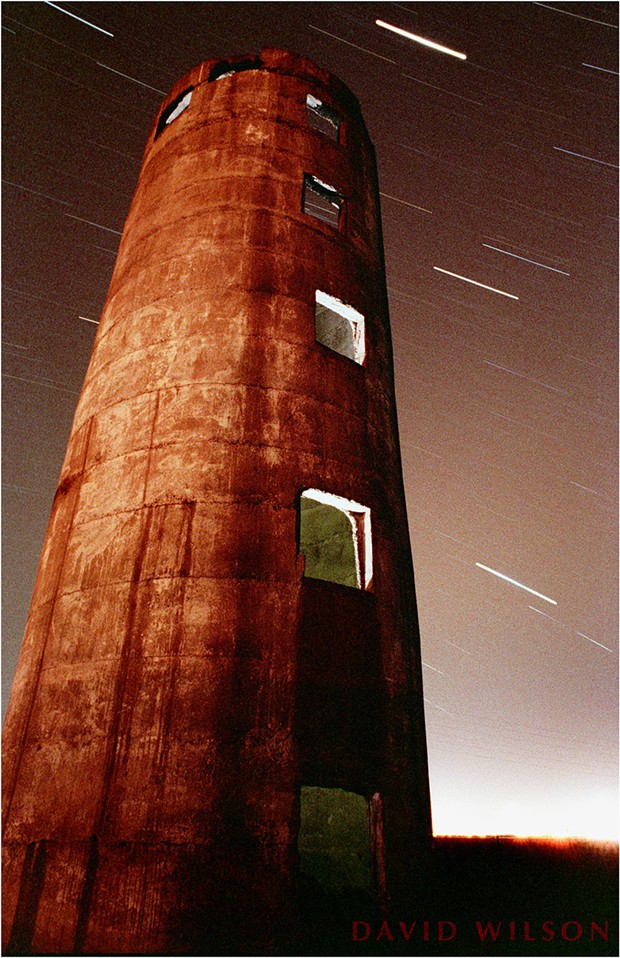 The tower once stood silent sentinel in the quiet fields near the Marsh in Arcata, lonely and abandoned when I discovered it. Long disused, it rose above the tall grasses and blackberry brambles covering the broken concrete rubble of the bygone structures once surrounding it. Its floor was piled deep with broken chunks and slabs, sloughed like skin from the walls of its own insides.

I think what it once was must be apparent to many people, but I have never been sure, and I’ve avoided certainty. I have relished the mystery, for it allowed my imagination to run free when I photographed it, and in my thoughts of it since. It is The Tower and inside it lives the Guardian. It’s no longer there for you to see but for me it will always be available, one of my Avalons in the mists.

“The Tower” was the first of this pair of images that I photographed. I don’t recall how many nights elapsed between the two photographs. I had noticed in The Tower that I had captured the Celestial Equator, which is the division between the northern area of the sky in which the stars appear to revolve around the northern polar axis (which was above and behind me) and the southern part of the sky where the stars are revolving around the southern polar axis, which lies beneath our horizon. Upon observation one can clearly see that the arc of the stars is upward near the top of the photograph and downward in the lower portion of the image. Capturing the Celestial Equator was purely unintentional, and it fascinated me. In fact, the idea of it had never occurred to me and the phenomenon puzzled me at first. But after finding it through my photography and thinking about the processes behind it, I understood how it came about. Now I can reliably find the Celestial Equator in other parts of the sky.

The Celestial Equator is not something one can pick out with the naked eye. Our eyes see the stars as static points but because of Earth’s rotation, they rise in the eastern skies and slowly make their way across the sky to toward the western region. Mostly they do. Since we’re north of the Equator, we can see the north star, called Polaris, which sits very near the northern polar axis. Stars near the north star travel in a circle about it, never meeting the horizon. Far enough away from Polaris, they travel in larger circles, and the largest circles are so great that we only see the part of their paths between where they rise in the east and set in the west. The stars travel circular paths in the southern skies, of course, but because we are north of the equator, we cannot see the southern polar axis. In “Guardian,” I aimed higher in the sky to accentuate the tighter circular paths of the northern stars.

The exposures for both photographs were each about 30 minutes long. The star trails you see show the distance that the stars moved during the 30 minutes that the camera shutter remained open. In photographing The Tower, I climbed inside to pop my flash toward the windows to give them their highlights, while the outside was softly illuminated by the lights of the city of Arcata. Eureka’s lights are brightly washed out in the distance at the lower right. 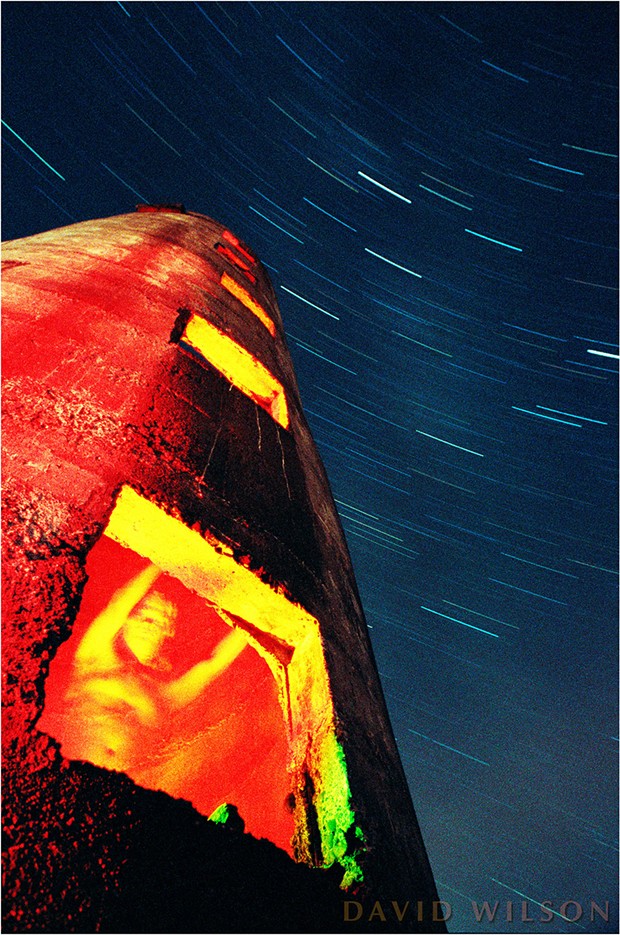 In the image called Guardian I was more experimental. My friend Klaus kindly volunteered to become the Guardian inside and I painted him in with my flashlight, which was the source of nearly all of the light in the photograph. While the shutter was open for the 30 minutes, I had plenty of time to add light here and there. I brought three filters with me for putting over the flashlight’s lens, each in one of light’s primary colors of red, blue, or green. I would paint with one color at a time, changing filters periodically as I went to continue with a new color. Overlapping the colors would blend them in those areas of the image; thus I made the yellow window sills by painting green over areas where I had already painted red and I made other areas a little more magenta by painting blue onto surfaces where I had added the red. I went fairly heavy on the red for a hot overall feeling.

What stories do you find in these photographs?

I made these images while a Photography student at Humboldt State University in 1991. I shot on film then and printed and processed my images in the dark room. These were shot on Ektar 1000 color negative film. Now I do the processing digitally. I’m glad I got the experience in the dark room but I would not go back. Many harbor a bias against digital adjustments, but if the same people appreciate Ansel Adams’ beautiful work, then they are appreciating a stylized image produced with a lot of dark room post-processing in the developing and printing to make it look the specific way he wanted — a process with which I find nothing wrong. Any creative photographer may carry his or her image-making beyond the camera, whether s/he uses special chemicals, papers or techniques in the darkroom or utilizes special skills acquired through years of study and practice with digital tools. To criticize one creative process while supporting another seems odd to me. I recognize and support the creativity in both.