Mysterious Light in the Sky and Smoke Trail Likely a Meteor 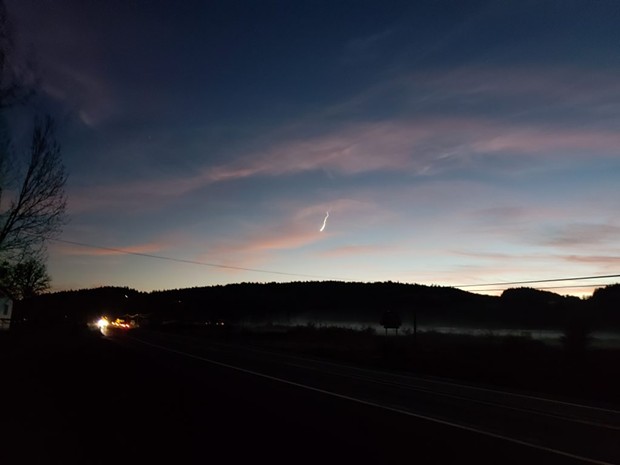 A mysterious light and what appeared be smoke trailing behind it blazed across the sky around 5:40 p.m. Residents of the North Coast as well as people in Reno, the Bay Area and beyond spotted the bright light followed by a curvy tail of smoke. Several sent us photos and video.

Many at first thought this was the Delta IV rocket Launch that had been scheduled at 5:44 p.m. but it had been cancelled due to a hydrogen leak. News organizations and scientists scrambled to explain what had happened.

According to a National Weather Service in the Bay Area tweet (which the Eureka office retweeted) at 6:50 p.m., “Still not 100% certain, but evidence is growing the object seen was a meteor. A meteor can create a very high level cloud called a noctilucent cloud. @NASA has a great webpage explaining the cloud formation. https://www.nasa.gov/mission_pages/aim/news/meteor-smoke.html”

Anyone see this or get pictures from NW California? We're thinking this might have been a #meteor sometime between 5:30 & 5:40 PM. #cawx https://t.co/ku6miQeBW8

Editor’s note: This report first appeared on kymkemp.com and is reposted here with permission.