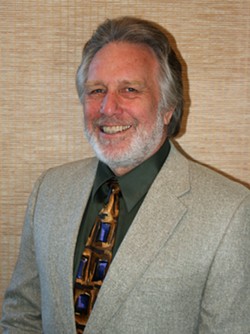 In 2011, George Wheeler, a McKinleyville resident and Vietnam veteran was horrified to see a neighbor spraying a potent herbicide on the hayfields near his home. As a victim of Agent Orange poisoning, Wheeler did not want his five children exposed to anything that might endanger their health. He quickly found other neighbors were just as concerned and a little research revealed that the property belonged to the McKinleyville Community Services District (MCSD), which leased it to a dairy farmer.

The neighborhood organized and began attending the district board meetings, demanding that spraying of herbicides cease. Board members — as well as some members of the public —wondered how the hundreds of acres of open space that the district manages could be maintained without pesticides.

Wheeler introduced the board to the concept of integrated pest management, which has been described as "an intermediary between organic and conventional methods." It is often used by agencies or cities, such as Arcata, which must manage large areas of open space. Maintenance staff emphasize prevention, using materials and designs that discourage pests, using organic practices like mulching and encouraging grazing where appropriate. Weeds are hand-pulled, mowed or burned. Insect egg-masses are removed by hand. If that is not enough, biological controls can be used. But chemical pesticides may only be used as a last resort and those least harmful to human health and the environment must be tried first.

Wheeler was elected to the district board of directors in 2013 and has served since then, winning re-election to another four-year term in November. During his term of office, integrated pest management was adopted as an official policy of the district.

Wheeler is also passionate about solar energy. The district uses a large amount of energy to operate its sewage treatment and drinking water distribution pumps . Wheeler convinced the board to design a solar photovoltaic energy system for these purposes and, last year, won a $4.9 million grant from the state.

The timing was perfect, since the district was also upgrading its sewage treatment plant to meet new upgraded environmental standards.

However, Wheeler's personal health has been failing. He has been struggling with Non-Hodgkin's lymphoma since 2001 but had managed to maintain a normal life. He saw no reason to believe this would change when he filed his intention to run for another term on the board with the county elections office in June. But over the next few months, the cancer took a turn for the worse and, by December, it became obvious that he could no longer fulfill the duties of a board member. He submitted his letter of resignation Dec. 10 and the Humboldt County Elections Office was notified of the vacancy four days later.

Although the board could hold a special election to fill Wheeler’s seat, it would be costly and they consequently decided to appoint a replacement who will serve until the next general election in 2020.

Members of the public are invited to apply for the position. The board wants somebody who is a McKinleyville resident, understands the district’s mission and whose prior history of employment, education and community service shows that he or she would be suited for the position of a director. The ideal candidate would have some business and financial experience.

Letters of interest can be written to the Board Secretary, McKinleyville Community Service District, PO Box 2037, McKinleyville, CA 95519. They must be received at the office by Jan. 30.

For more information, see a press release from MCSD announcing the vacancy copied below:

McKinleyville, CA – The McKinleyville Community Services District (MCSD) has one vacant governing board seat, to be filled by appointment. The MCSD Board of Directors (Board) is currently accepting letters of interest from qualified applicants which will be used in selecting the ideal candidate. Letters of interest should be directed to Emily Abfalter, Board Secretary, at the MCSD office, 1656 Sutter Rd. McKinleyville, CA 95519 no later than 5:00 pm, January 30, 2019, and include the following information:

MCSD is governed by a five-member Board, who serve four year terms. The appointed candidate will initially serve a two year term, expiring December 4, 2020. A general election in November of 2020 will allow McKinleyville residents to then elect a candidate to serve the remaining two years. Please direct comments or questions to Gregory Orsini, General Manager, at (707) 839-3251 or mcsdgm@mckinleyvillecsd.com.