Find Yourself in the California Legislature — Or Not There are (still) more white men named James or Jim in the California Legislature than African-American and Asian-American women combined. Throw in some white Robs, Bobs and Roberts, and you have a pretty sizable “JimBob” caucus with a membership larger than the number of Republican women, openly gay or lesbian legislators, or women from any party under the age of 40.

This week, California seats a new class of lawmakers. You may not know their names, but their work is important to your day-to-day life, impacting everything from your taxes to the quality of the air you breathe.

After a year in which sexual misconduct allegations led to calls for both parties to run more female candidates, women made significant gains in the Legislature in November’s election.

California opens 2019 with 36 women in the Legislature—a near record (the previous high was 37 at the end of 2006). Nearly 60 percent of all newly elected California lawmakers are women, mirroring a surge in successful female candidacies across the country.

But California’s statehouse still falls far short of equal gender representation. Even after this election’s gains, women account for just 31 percent of California legislators. (If you’re wondering, women make up a little more than half of voting-age Californians).

Male-dominated politics are hardly a uniquely California phenomenon. More than 75 percent of the new Congress is male.

But California still trails many other states, including some of its more conservative neighbors. Oregon and Arizona each have a higher proportion of women in their legislatures than California, while Nevada recently made history as the first state to elect a legislature with a female majority.

Nearly 1 in 10 voting-age Californians is a woman with Asian-American or Pacific Islander heritage. That’s a bigger proportion than the state’s entire voting-age African-American population, male and female.

But only 1 in 118 California legislators is an Asian-American woman. Ling Ling Chang, a Taiwanese Republican senator from Diamond Bar in eastern Los Angeles County, won her seat in the June recall of a sitting Democratic legislator. She’ll likely face a tough re-election battle in 2020.

Asian-American is obviously a very broad term. The majority of Asian-Americans in the California Legislature are of Chinese or Taiwanese descent. Notably underrepresented are Vietnamese-Americans and Filipino-Americans, which are among California’s largest Asian-American groups. There is only one Filipino lawmaker, Democrat Rob Bonta of Alameda, and one Vietnamese lawmaker, Republican Tyler Diep of Huntington Beach.

Chang is also one of only five non-white Republicans in the Legislature, all of whom are Asian-American or Pacific Islander. What’s left of the shrinking California Republican presence in Sacramento reflects the party’s struggle to expand its demographic tent.

Of the near-record-low 30 Republicans in the Legislature, 21 are white males. There are no Latino, African-American or openly gay or lesbian GOP legislators.


Latinos are still underrepresented. That’s partly generational, and partly about who votes

Latinos may be the largest ethnic group in all of California, but they are far from a plurality in the Legislature.

Even with six new Latino lawmakers elected last November, Latinos account for just over 20 percent of the 2019 legislative class. As of 2017, nearly 40 percent of all Californians identified as Latino. 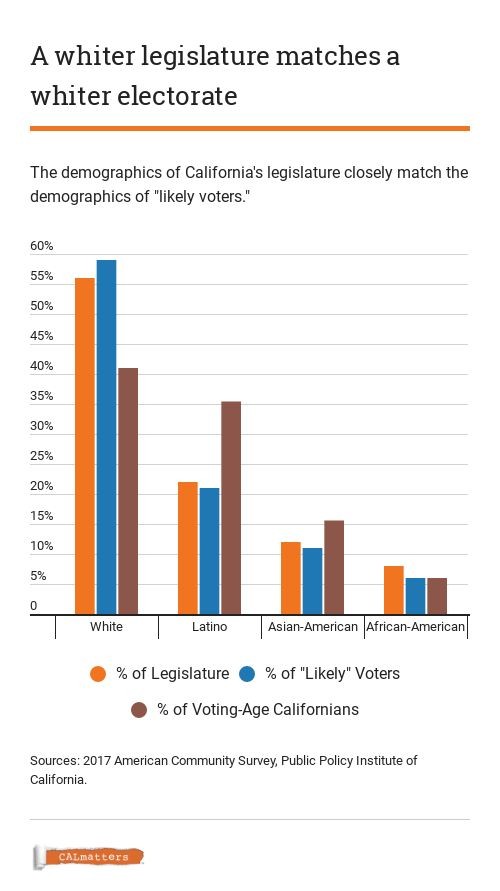 Those awaiting a more visible presence of the “sleeping giant” of California politics can take partial solace in the state’s demographic future. Non-Hispanic whites still make up a larger proportion of Californians over 18 than do Latinos. But Latinos in their 20s, 30s and 40s outnumber whites in the same age groups, as do Latinos under the age of 18.

Younger and low-income Californians are typically less likely to vote than their older, wealthier neighbors. Since Latinos tend to skew both younger and lower-income in California, it’s perhaps unsurprising that their share of political representation in Sacramento mirrors their share of “frequent” voters.

That’s not shocking if you believe that candidates and those who vote for them tend to look like one another: Despite comprising a huge share of the electorate, only 18 percent of likely California voters are under age 34, according to the Public Policy Institute of California.

Another noticeably absent block of Californians from state office: people who make less than six figures. California has the highest compensation for state legislators of any state in the country, at $107,000 per year. The 2017 median income of a California household? $70,000.

Want to see if there are legislators like you? Check out the CALmatters interactive here.