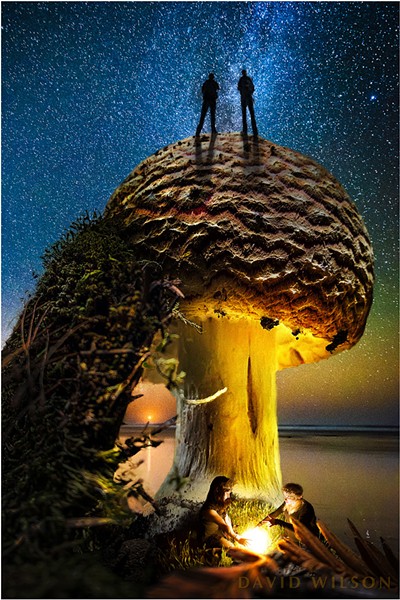 It’s not for everyone to take the world seriously all of the time, though some people probably need to, at least a little bit. But I don’t think I’m one of them. I surmise folks like that need people like me to keep things in balance, so this week I am taking creative license to present a handful of images of our North Coast through the looking glass of whimsy. Or is that mimsy?

Taking an early morning walk in the woods after the first rains, one finds mushrooms in many forms and colors pushing up through the debris on the forest floor. Some are small, some are large. Once while hiking with friends after sunset along the continent’s edge where the forest overlooks the broad Pacific, we spied a mushroom taller than the rest, a veritable tree it was. I joked that we could climb to the top of it, though I’m not really fond of heights. But when my friend Bill from SoCal began scrambling up a tuft of moss leaning on the mushroom’s side, there was nothing for it but to climb up with him. From the mushroom’s summit we watched as the crescent moon set into the ocean. Friends Morgan and Miranda stayed below and spoke in whispers over a glowing orb. I think they kept us safe.

It brings to mind another time I met Morgan and Miranda, late one night up on Monument Road to the west of Rio Dell. This time they were floating by in a bubble of light reminiscent of that in which the Good Witch of the North rode to visit Dorothy in Munchkin Land — only Morgan and Miranda are real, of course. We caught up on things, and then they had to float on down the road. I didn’t really think anything of it at the time, but there was something odd about their mode of transportation. Note to self: Next time I see them I must find out what that was all about. They seem to travel around in some kind of goddess energy.

There’s a small well-known cave at Moonstone Beach. Those who have lived here long have seen how it changes with the storms and tides and seasons; the sand level at the entrance can vary a lot, for instance. Sometimes one can’t walk into it without crouching, while other times the sand is lower and more of the opening is exposed. The latter was the case on one evening visit to the place, but there was something else I’d never noticed there.

There were granite pillars formed into the living rock, creating a gateway to the cave in the floor of which gaped a dark pit ringed with the moon-like stones so common at Moonstone Beach. A luminous yellow fume rose from black maw and around it a gray mist hung low to the ground. To one side a stone stairway led upward between two great leaning stones and through the archway thus formed was another world where the evening sun was still setting over the ocean. A comet hung in the night sky over the cave. The strange thing was that none of it felt strange at the time.

Later, looking at the photos of it at home, I noticed at the top of the stone steps the ghostly figure of a man looking out to sea. A trail through the mist led back from him to the pit. I had not seen him when I photographed the scene. And now, I think I see eyes in the rock. I have been back to the cave many times since, and though the storms and the seasons still leave their marks, never again have I seen it as it was that night.

Photographing the North Coast light in the dark of night has blessed me with many beautiful evenings beneath the stars and some strange ones. Imagining these evenings as marbles, I poured a few into my wife’s hands for her to hold. Care for one?