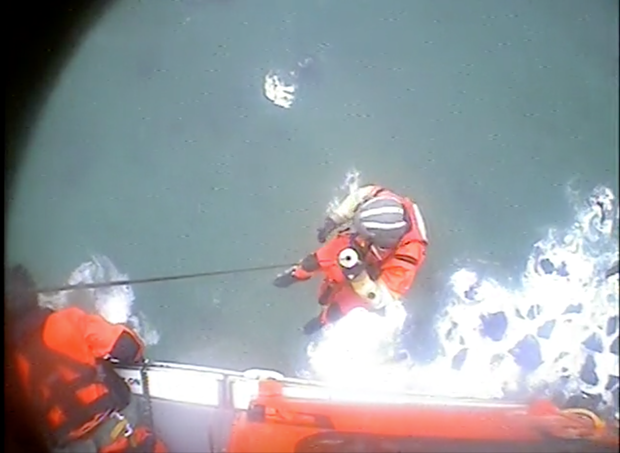 UPDATE:
Humboldt County made clear how the local community feels about its Coasties with a GoFundMe account surpassing the $10,000 fundraising goal to reach more than $12,000.

Over the course of the last five days, 130 people pitched in on the effort, with many leaving message about what the U.S. Coast Guard means to them and others condemning that these local service members and their families are being held “hostage” in the president’s bid for a border wall.

Humboldt County residents are stepping up to help local Coast Guard members and their families who are facing financial uncertainty amid the government shutdown.

Many of the donors left comments about their deep appreciation for the men and women who serve here, noting their bravery and "selfless commitment" to protecting the North Coast community.

About 250 Coast Guard service members live in the local area, all of whom are working without pay as President Donald Trump and Congressional Democrats continue to be deadlocked for a 28th day over nearly $6 billion in funding Trump wants for a highly controversial border wall.

Meanwhile, service members were told in a since deleted tip sheet by the Coast Guard Support Services, which was reported on by multiple media outlets, to inquire about getting short-term loans, forbearing mortgage payments and even having garage sales to make ends meet until the government re-opens.

Christine Tyson, the city’s executive assistant, says the community response to calls for donations of nonperishable good, cash and gift cards has been tremendous.

“Everyone is really working together to raise money for these people who are going through hard times,” she says. “It’s doing so amazing.”

The city will be accepting donations of non-perishable food, gift cards and cash donations for service members and their families at city hall, 531 K St., and will also be accepting checks mailed to the City Manager’s Office at the same address.

In a letter to service members Tuesday, Coast Guard Commandant Admiral Karl L. Schultz acknowledged the “the anxiety and uncertainty” of the situation, saying to the best of his knowledge “this marks the first time in our nation’s history that service members in a U.S. Armed Forces have not been paid during a lapse in government appropriations."

He also recognized efforts like the one currently going on in Eureka, saying he was grateful for the “outpouring of support across the county, particularly in local communities.”

“It is a direct reflection of the American public’s sentiment towards their United States Coast Guard; they recognize the sacrifice that you and your family make in service to your country,” Schultz wrote.


To the Men and Women of the United States Coast Guard, Today you will not be receiving your regularly scheduled mid-month paycheck. To the best of my knowledge, this marks the first time in our Nation’s history that servicemembers in a U.S. Armed Force have not been paid during a lapse in government appropriations.

Your senior leadership, including Secretary Nielsen, remains fully engaged and we will maintain a steady flow of communications to keep you updated on developments. I recognize the anxiety and uncertainty this situation places on you and your family, and we are working closely with service organizations on your behalf.

To this end, I am encouraged to share that Coast Guard Mutual Assistance (CGMA) has received a $15 million donation from USAA to support our people in need. In partnership with CGMA, the American Red Cross will assist in the distribution of these funds to our military and civilian workforce requiring assistance.

I am grateful for the outpouring of support across the country, particularly in local communities, for our men and women. It is a direct reflection of the American public’s sentiment towards their United States Coast Guard; they recognize the sacrifice that you and your family make in service to your country. It is also not lost on me that our dedicated civilians are already adjusting to a missed paycheck—we are confronting this challenge together. The strength of our Service has, and always will be, our people. You have proven time and again the ability to rise above adversity. Stay the course, stand the watch, and serve with pride. You are not, and will not, be forgotten.