Eclipse of the 'Super Blood Moon' is Coming Soon

The sun, moon and Earth will align Sunday in a celestial phenomenon known by the ominous moniker “super blood moon” — the only total lunar eclipse of 2019 — with all of North America set to receive a full view, depending on the weather, according to NASA.

“Super” refers to the moon being closest to the Earth during a full moon and “blood” comes from the reddish hue the orb will take on during event, which begins 6:36 p.m. local time with the “moment of greatest eclipse” taking place at 9:12 p.m., according to NASA.

The National Weather Service is forecasting showers in the region for that evening.

Read more about what to expect and how it all works here.

Meanwhile, some of the year’s highest tides are also taking place over the next several days, Friday to Wednesday, which could cause coastal flooding in low lying areas.

Read the King Tides post from the National Weather Service below:


Some of the highest tides of the year are expected over the next several days. Prolonged southerly winds and large surf from recent storms have generated a storm surge that could lag after storms have passed. Storm surge will increase water levels above already high astronomical tides and cause some minor coastal flooding in low areas along the coast and around Humboldt Bay. Coastal flood advisories will be issued if flooding is expected. Please take caution when exploring beaches this weekend as changing tides may cut you off your path to safety. 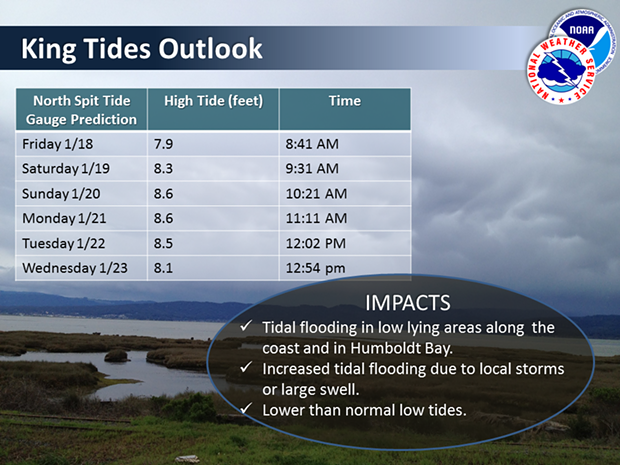 The city of Arcata is asking members of the public to help document water levels at 15 specific locations Jan. 20 and Jan. 21, although photographs of the King Tides’ impacts in other areas is also welcome.

Read more about the project and how to help here.