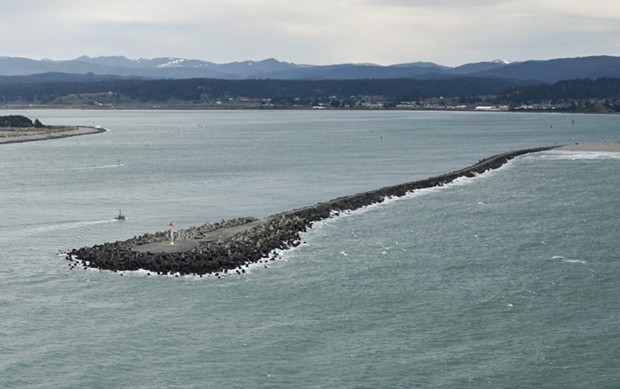 An off-duty Coast Guard civilian employee helped rescue a surfer who'd lost his surfboard and was in distress this morning.

According to a press release, Steven Bluntzer, a Sector Humboldt Bay civilian search and rescue controller who also happens to surf, saw an individual in distress, instructed bystanders to call 911 and headed in to help.

“Bluntzer pulled the distressed surfer onto his own surfboard amid high surf and strong current. The surfer reported he had been fighting the current and treading water for approximately 45 minutes after losing his surfboard,” the release states.

Note, of course, Coast Guard service members and essential civilian personnel are still on the job to protect our shores despite having now missed their second paycheck amid the partial government shutdown, which is now entering its 35th day.

Read more about local efforts to help Coasties and their families and federal employees here and here.

"I just did what any Coastie would do in that situation," said Bluntzer in the release.

Read the Coast Guard release below:

A bystander called Coast Guard Sector Humboldt Bay watchstanders via 911 at approximately 8 a.m., reporting a surfer had lost his board near the Humboldt Bay north jetty and appeared to be in distress due to the strong current.

Prior to the rescue units arriving on scene, Steven Bluntzer, a Sector Humboldt Bay civilian search and rescue controller and also a surfer, was on scene and noticed the distressed surfer.

Bluntzer instructed a bystander to call 911, then entered the water on his own surfboard to assist the surfer in distress.

Bluntzer pulled the distressed surfer onto his own surfboard amid high surf and strong current. The surfer reported he had been fighting the current and treading water for approximately 45 minutes after losing his surfboard.

All rescue boats then arrived on scene and transferred both individuals to shore.

"I just did what any Coastie would do in that situation," said Bluntzer.

The Coast Guard urges the public to remain vigilant during changing and challenging ocean conditions and remain off rocks, jetties and outcroppings during periods of high surf.

When heading out on the water, always let someone know where you are going and when you plan to return and never swim alone.

Check local weather conditions at http://www.wrh.noaa.gov/eka/ before participating in ocean or shore activities.

The Coast Guard continues operations authorized by law that provide for national security or that protect life and property during partial government shutdowns; however, there are some impacts to our day-to-day operations. Coast Guard uniformed and Civilian essential personnel will continue to perform their duties during a partial government shutdown and will provide essential services such as search and rescue, port and homeland safety and security, law enforcement and environmental response.