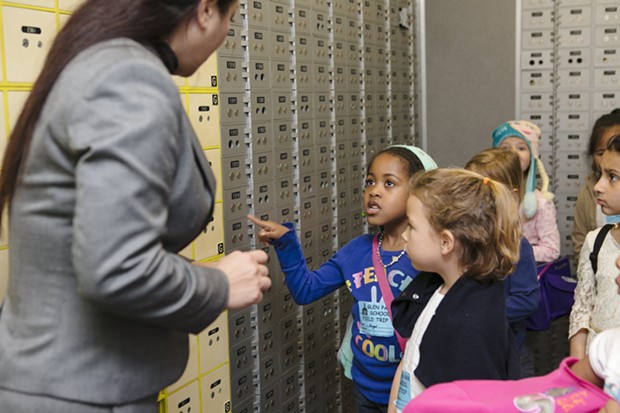 Emelyn Jerónimo is only 12 years old, but she already has $3,000 saved toward college. Socked away by her mother in chunks of $100 or less since Jerónimo was in kindergarten, the money may not seem like much, but it’s helped fuel the San Francisco sixth-grader’s dreams of becoming a pediatrician.

Jerónimo’s nest egg is part of a first-of-its-kind program that automatically sets up college savings accounts for every kindergartner in San Francisco’s public schools, each seeded with $50 from the city treasury. And if Gov. Gavin Newsom gets his way, the model could soon roll out to other cities across California.

Newsom launched Kindergarten to College as mayor of San Francisco in 2010, and last week proposed spending $50 million on similar pilot projects around the state as part of what he’s calling a cradle-to-career education strategy.

“You want to address the stresses, the costs of education?” Newsom said at a press conference unveiling his 2019-20 budget. “Let’s start funding those costs when people enter into kindergarten.”

According to Humboldt County Office of Education spokesperson Jenny Bowen, local schools welcome an average of about 1,725 kindergarteners a year, which would put the annual cost of a similar program to San Francisco’s at about $86,000.

Fans of so-called child savings accounts say they help children envision themselves attending college from a young age. Families of San Francisco public school students, many of whom are low-income, have saved a total of $3.4 million of their own money in the Kindergarten to College accounts, according to city Treasurer José Cisneros.

Only about one in five students have contributed money beyond what the city supplies. That still outpaces the percentage of U.S. families contributing to 529 plans, tax-deferred accounts that provide another option for college savings—as Cisneros is quick to point out.

“To me, when you have millions of dollars saved for college and it’s coming in part from the poorest families in the city, that’s a huge win,” argues Cisneros, who said Newsom has told him he wants to model the California program on San Francisco’s approach. “This is sending a signal to thousands of kids in our city that college is something that’s going to be part of your future.”

“This is sending a signal to thousands of kids in our city that college is something that’s going to be part of your future.” tweet this
While individual 529 accounts can require savers to fill out complex paperwork, pay fees, or navigate online management tools, parents learn about the Kindergarten to College accounts through a letter from their children’s school. They can make deposits in cash at bank branches or school campuses, and because the program is universal, don’t have to provide proof of income or citizenship status to participate.

Under San Francisco’s model, children have until age 25 to use the money in their accounts, which can be spent on any kind of post-secondary education, including vocational school. If the money goes unspent, the city will refund any outside contributions to the accountholder, with the original $50 deposit going back to the city treasury.

A number of other states and cities have also established child savings accounts, funded with either public or philanthropic dollars. It’s a relatively new idea, so most accounts haven’t been around long enough for researchers to study long-term outcomes.

Still, there are some signs the programs may be working. Researchers in Oklahoma studied 2,700 families with children born in 2007, randomly selecting half of them to receive $1,000 in a college savings account at the child’s birth. They found that children with accounts scored higher on measures of social and emotional development than those in the control group. Their mothers were more likely to report higher educational expectations for their children, the researchers found, and even exhibited less depression than those in the control group.

One reason the accounts may appeal to policymakers: They’re relatively simple to supply when compared with addressing systemic inequities that affect educational success, such as access to social networks and family wealth.

“Social capital is really important for people but hard to give to them,” said William Elliott, director of the Center for Assets, Education and Inclusion at the University of Michigan. “But we can give them money in their account.”

Getting parents to trust the process can pose a challenge. Jerónimo’s mother, Erika Sierra—an immigrant from Oaxaca, Mexico—was unnerved when a bank teller in her Mission District neighborhood asked for her Social Security number in order to deposit money in her daughter’s account. For months, she stopped saving, only resuming when an outreach worker from a local non-profit, Mission Graduates, explained that she could use a different form of identification.

Now, she and her two daughters gather up cash from birthday presents and bring it to the bank—her daughters filling up the envelopes themselves.

“It’s a good option for teaching them the habit of saving,” she said. But she said many parents at her daughters’ school opt out of using the accounts, whether out of fear or because they don’t understand how. The city tries to combat those doubts by taking kindergartners and their parents on field trips to local bank branches.

“It’s a good option for teaching them the habit of saving.” tweet this
Cost is another hurdle, especially in cities less flush with tech industry cash than San Francisco. In Lansing, Mich., city leaders decided to offer child savings accounts—modeled on San Francisco’s—with just a $5 initial deposit.

A state investment in college savings accounts could support places like Oakland and Long Beach that are developing their own programs. But those dollars could also be spent shoring up California’s financial aid system. More than 200,000 eligible students applied for the state’s Cal Grant scholarships last year and didn’t receive one. Newsom has called for a modest increase in the number of those grants, along with boosting the amounts awarded to student parents.

Advocates for the savings accounts, however, argue that investments in financial aid are better made earlier in a child’s educational career. Some even say that federal Pell Grants—need-based scholarships for higher education—should be divided into two chunks, with one given out during childhood.

“Financial aid is in many ways kind of too late,” said Cisneros, the city treasurer in San Francisco. “It’s not there early enough to send a message to 5-, 6- or 7-year-olds that college is something you have every right to have access to.”

“Financial aid is in many ways kind of too late. It’s not there early enough to send a message to 5-, 6- or 7-year-olds that college is something you have every right to have access to.” tweet this
Researchers are also studying whether rewards cards could help parents who are living paycheck to paycheck save for college by giving them cash back on grocery purchases, and whether universal child savings accounts counteract implicit bias among teachers by encouraging them to see all students as college-bound. California could become a laboratory to test those ideas if the legislature signs off on Newsom’s plan later this spring.

Meanwhile, Sierra, a stay-at-home mom who never went to college herself, says her daughters’ savings accounts have given her an excuse to talk to them about higher education.

“I tell them, ‘Don’t worry about what we have or what we don’t have,’ ” she said. “Just keep studying, and you’ll get to college.”

Thadeus Greenson contributed to this report.