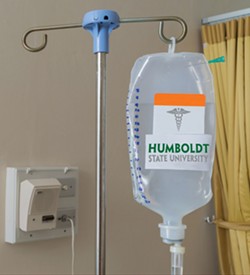 Humboldt State University is looking to hire a director for its new nursing program, which the university hopes to have up and running by the fall of 2020.

In a press release today, the university announced that efforts to create a new bridge program — which will allow working nurses and those who have recently obtained an associates degree in nursing — to continue their educations locally. The Journal reported on the dire need for nurses in Humboldt County in its Jan. 19, 2017 cover story “Nurses, Stat,” noting that the need was exacerbated by the university’s decision in 2011 to shutter its existing nursing program in the face of an intense budget crunch, and followed up on Feb. 9, 2017 with a report that HSU and CR were actively collaborating on the creation of an RN-BSN bridge program.

The hope is that the new program will both result in a better trained local nursing force and a slight uptick in the number of nurses working locally, as people won’t have to leave the area to continue their nursing educations. According to a university press release, the program will focus on “the particular needs of the North Coast: Preparing nurse leaders who understand health disparities, rural needs and cultural humility, and who can advocate for the physical and psychosocial health of the region’s communities.”

The press release also notes that funding the new program remains a challenge, noting that the newly hired director will be expected to assist in efforts to raise private funds and that the university is currently soliciting donations to create a $10 million endowment for the program.

See the full press release from HSU copied below and the nursing director job posting here.

Humboldt State University has begun a national search for a director to lead an RN-to-BSN nursing program, which could enroll its first students as soon as Fall 2020.

The director is a faculty position, with broad responsibility for overseeing continued development of the program, raising the necessary private funding, working with partners in the community, recruiting faculty, and launching the program. A master’s degree is required and preference will be given to those who have earned a doctorate or equivalent in Nursing or related field.

The new program is designed to allow registered nurses who already have an associate’s degree to complete their bachelor’s degree in nursing locally. The program’s focus is on particular needs of the North Coast: preparing nurse leaders who understand health disparities, rural needs, and cultural humility, and who can advocate for the physical and psychosocial health of the region’s communities.

In developing the program, HSU has been working closely with College of the Redwoods as well as local healthcare leaders, who say it is one of their top priorities. The hope is that it will help address a local nursing shortage while also enhancing the quality of local healthcare.

The program will be housed within HSU’s Department of Kinesiology and Recreation Administration.

An initial priority of the new director will be assisting efforts to raise private funds. The nursing program will be dependent on significant financial support, and HSU is currently seeking charitable commitments to create a $10 million endowment.