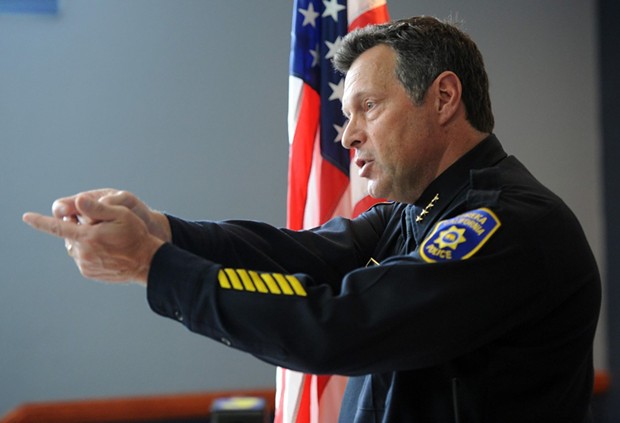 Jamilia Land walked out of a meeting in the state Capitol feeling optimistic that 2019 may be the year California changes the law to try to reduce the number of people killed by police.

It’s personal for her. Land is a family friend of Stephon Clark, the unarmed man Sacramento police shot dead last year in his grandmother’s backyard. Officers thought he was holding a gun, but it turned out to be a cell phone.

Clark’s killing set off protests nationwide and spurred a highly controversial bill in the state Capitol that would have set a tougher legal standard to justify police shootings. After months of intense lobbying by police groups opposed to the bill, the Senate leader shelved it over the summer — but promised to help deliver a new version this year.

“I think that for the first time in a long time in the state of California, we’re actually going to see an effective legislative change,” Land said last week after meeting with a lawmaker and other advocates for a bill to create stronger police accountability. “Our political climate is now one where we are having sweeping criminal justice reform and one of the last things to really talk about is police murder and the use of deadly force.”


Exactly how the legislation will attempt to reduce killings is not clear; a bill has not yet been introduced. But Assemblywoman Shirley Weber — the San Diego Democrat who carried last year’s stalled bill — is working on it. Civil rights advocates and law enforcement lobbyists have been negotiating behind the scenes with key legislative aides for months, and the legislation is expected to take shape soon.

When it does, it’s nearly certain to raise a serious debate in the state Capitol over one of America’s most enduring problems—the often toxic relationship between black and brown communities, where the quality of life for law-abiding residents is often undercut by high poverty and crime rates, and police who are sworn to protect and serve, but who sometimes can err — lethally.

Both sides are influential in the Democrat-dominated state Capitol. And both sides acknowledge a need to improve trust and safety. But their visions for how to do it vary greatly.

“The police and the communities, we’ve got to come together and make sure that trust is there,” said Ronald Lawrence, vice president of the California Police Chiefs Association.

Police also want more money for training officers and more access to psychiatric specialists and homeless services to handle calls for people who need help, but not necessarily from the cops.

Activists and civil rights advocates say trust will come when police are held accountable for killing. Making it easier to prosecute police, they say, will ultimately reduce unnecessary deaths.


One reason officers are so rarely prosecuted is that the legal standard justifies using deadly force when a “reasonable officer” would do the same thing in the split-second before firing. Last year’s controversial bill would have changed the legal standard in California to justify shooting only when “necessary,” meaning only when other tactics, such as warnings or de-escalation, were not possible instead.

“Our law is way too permissive. It gives very broad discretion to use force to kill people regardless of what other options (an officer) had,” said Lizzie Buchen, a lobbyist for the American Civil Liberties Union, which is behind the effort to craft a new law. “There’s a pretty overwhelming perception by the public that police operate with impunity and that they can kill people without being held accountable.”

Police counter that they themselves are often the targets of violence and say they need maximum legal protection to perform a dangerous job. They chafe at the idea of a law making it harder for them to shoot, saying it would make them more vulnerable to being killed.

“Ninety-nine percent of the time officers are reacting to the way someone is approaching them. To sit here and say if I roll up on a scene that I have to use a Taser, a night stick, and go hands-on before I can use deadly force, you’re jeopardizing public safety,” said Brian Marvel, president of the Peace Officers Research Association of California, which represents 70,000 officers.
“We have all these tools on our belt and depending on what we’re facing and how violent the person is toward us will determine what force we use.”

The debate took on more urgency this week as Attorney General Xavier Becerra released his office’s first review of the Sacramento Police Department since Clark’s killing. The 97-page report urges the department to overhaul its use of force policies, recommending that it expand use of de-escalation tactics (such as verbal warnings or persuasion), emphasize “the sanctity of human life” and better define and explain that force should be used “only when necessary.”

Asked if he thinks state law should require police departments statewide to adopt such policies, Becerra stopped short of endorsing new legislation but said “the more it’s hard and fast in statute or ordinance, the better off you are. This is clearly a road map … to get there.”

Buchen, the ACLU lobbyist, noted that many of Becerra’s recommendations call for policies that were included in the bill that stalled last year. She expects the report will influence discussions in the Capitol over a new version of the bill.

“This is so similar to what we were trying to do last year,” Buchen said. “It’s more affirmation that we’re on the right course.”

“We do have a problem in this country and in this state,” Atkins said. “So we’ve got to make sure we get something done on this issue.”