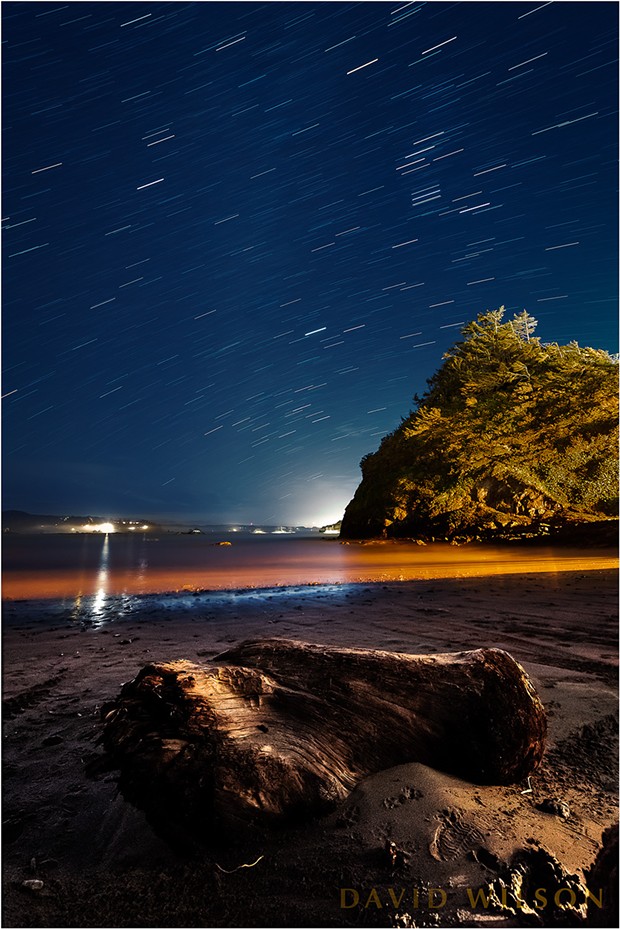 I opened the camera’s shutter and waited.

It was already high tide and I didn’t expect any waves to reach me. When I had arrived half an hour earlier, I’d set up where the small waves coming in across Trinidad Harbor lapped nearly at my feet. I’d taken a few photographs from there but the incoming tide periodically sent the odd wave farther than the rest and had pushed me back up the beach.

It must have been a message to me that I needed something more interesting in the foreground, for I found myself guided to a heavy wave-sculpted piece of driftwood I hadn’t noticed before in the darkness. Its contours would help bring the foreground to life.

As I waited through the long exposure, I thought about the light falling around me. Most of the light on the beach came in from the boat launch area some distance to the right of me. It lay across the sand and surf in interesting patterns of shade made by various forms near the boat launch.

I was excited by the way the light skimmed gently across the upper surfaces of the driftwood, accentuating its contours and illuminating a mound of sand around it. Some of the light also struck the camera so I stood and waited where my body could shade the bulbous face of the wide angle lens. I wasn’t sure I had to but it couldn’t hurt. It was a long exposure and I didn’t want any slight lens flare to build up during the course of it.

It was too dark for my eyes to make out much detail in the sand but I could tell that people had been there before me, both by a vehicle’s tire tracks and by the footprints of a person near what I took to be the paw prints of a four-legged companion. Would it have been cheating, I wondered, if I’d had a bucket of water to pour over those tracks to smooth them out? Don’t photographers always want that pristine beach shot? Should I control the tracks in the photograph themselves? There is the classic shot of tracks walking away in the sand that seems compelling to photographers. I regretted the random evidence of humanity in my image at first but there is also something to be said for capturing the essence of a place, and those marks in the sand and the people who made them had been part of it that day. 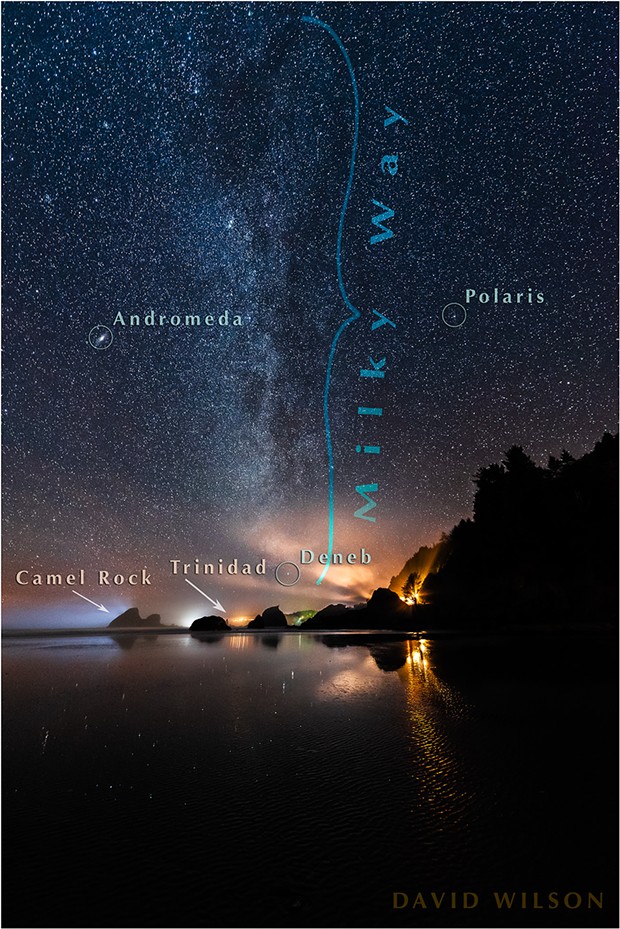 I was still standing where I could shade my lens. I looked at my phone’s clock. It had only been a few minutes. I wasn’t sure how long I was going to wait but a few minutes was certainly not enough time. I was patient, though. I wanted to allow the stars enough time to travel across the sky far enough to make trails that would show the pathways of their travel.

The sky was full of stars, with the constellation Orion prominent over Little Head. I didn’t know how long I could leave the shutter open before the surface lights became too bright in the image but if I left it open long enough, the crowded star field would make great star trails. I was using a wider angle lens than I had before for star trails and I wasn’t sure how far across its field of view the stars would travel in a given length of time. I had a good idea, though, and I knew that in the direction my lens faced the stars would travel the furthest during any given exposure time.

In a long exposure, stars move a shorter distance closer to one of Earth’s axes but where I was looking was directly between the northern and southern polar axes where the stars would leave their longest trails. The length of the star trails is also governed by the lens focal length: With a wide angle such as I was using the stars would move a shorter distance across the frame than they would if I were more zoomed in.

I was still standing and shading my camera’s lens. Ten minutes so far. Suddenly far down the coast a car’s headlights appeared on Scenic Drive, probably at the Houda Point parking area, I estimated, or Luffenholtz. As the car lingered there, the brightest spot in the image, I wondered if it would be too bright for the picture.

There is a bit of seat-of-the-pants guess-timation in these nighttime images. It’s easy to overexpose a bright source of light like that car and it’s easy to underexpose elsewhere in a scene and end up with a dark image. Those headlights were worrying me. The bright glow in the distance behind Little Head was also a concern the longer I waited but I was situated so that most of it was behind the rock. The car moved a little and the headlights lost some of their intensity, but they were still bright. They had been on for more than two minutes. At some point soon I knew they’d become an uncontrollably bright blotch on the image. I didn’t want that. I was done.

I closed the camera’s shutter.