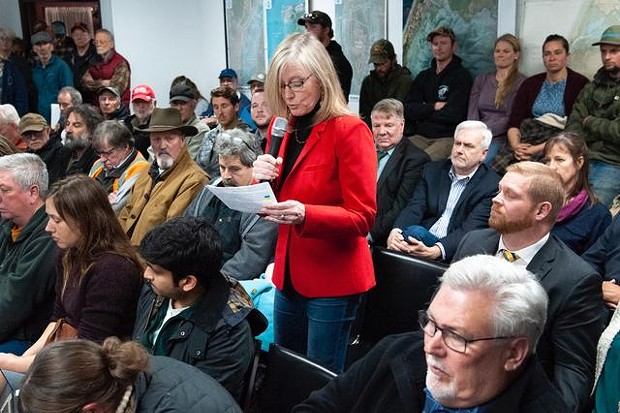 The Humboldt Bay Harbor, Recreation and Conservation District today approved a 30-year lease with Norwegian company Nordic Aquafarms to build a massive fish farm at the former pulp mill after hearing concerns the deal was ushered through without public review.

The plan is to build a land-based aquaculture facility that would eventually produce some 25,000 tons of fish a year – likely salmon or steelhead – to serve as the West Coast hub for Nordic Aquafarms, which is currently in the process of developing an East Coast equivalent in Belfast, Maine.

The agreement comes with two automatic 10-year renewals but also includes a three-year option, or “planning period,” during which the company will be pursuing the necessary permits before the full lease would go into effect.

During that time, Nordic will pay the harbor district $20,000 a year. The rent will increase to $159,128 annually after the three-year mark. Included in the terms is the right for the company to discharge 6 million gallons of wastewater per day using the site’s ocean outfall pipe, which extends 1.5 miles offshore.

Nordic would also pay a $500,000 fee to access the district’s electric substation.

The facility will use a recirculating aquaculture system, or RAS, which utilizes large tanks and water treatment systems, a method the company says prevents many of the common issues associated with raising fish in offshore pens, including pollution from waste, chemical use and the potential to pass on diseases and parasites to wild fish.


Several commissioners said the item before the harbor board was just about the land and this was only the start of a long process that will have ample opportunity for public comment.

“This is step one,” Commissioner Larry Doss said. “This is the beginning of due diligence.”

With the lease approval coming immediately after the first details were aired publicly, one speaker called the decision a “missed opportunity for engagement.”

Others in the standing-room-only crowd — many identifying themselves as being involved in commercial fishing — also noted that they wished the harbor district would put more effort into maintaining the harbor for those who are still trying to make a living off the sea, and some questioned whether the fish farm would end up being their competitor.

Erik Heim, the company’s founder and U.S. president who attended the harbor district meeting, said local input is a “key component” for the company and noted he understood the concerns of local fishermen, saying he would like to “look for opportunities to work together.”

Still, the project — touted to bring millions to the local economy and employee at least 80 people — had its share of supporters, including Fourth District Supervisor Virginia Bass, who said the fish farm proposal would be one of the largest economic investments in the county “since the end of the 20th century.”

“This opportunity represents, to me, the rebirth of the peninsula,” she said.

Look for expanded coverage of the fish farm proposal in this week’s edition of the Journal.