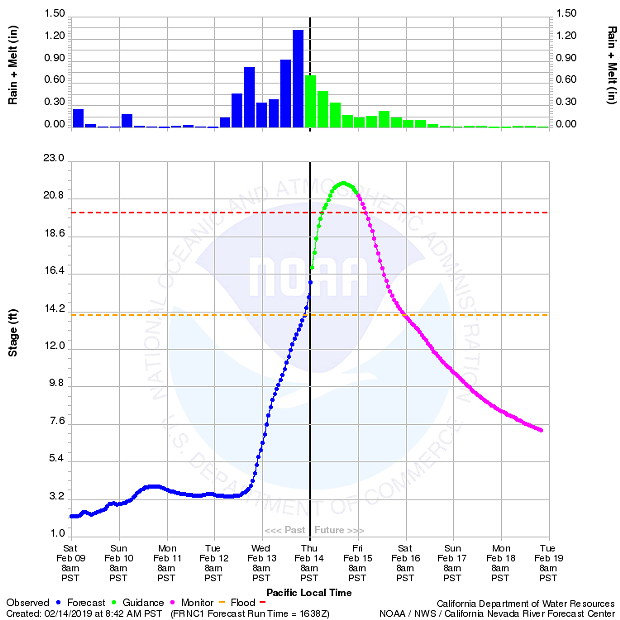 When one road closes another opens here in Humboldt as the winter weather pattern continues.
According to the county, Ishi Pishi Road is now open without restrictions but Cannibal Island Road is “marked as flooded.”

The Eel River at Fernbridge is expected to exceed flood stage by early this afternoon, according to the Humboldt County Office of Emergency Services.

The National Weather Service’s flood watch for the region remains in effect until 4 p.m.

According to OES, the Eel River at Fernbridge is forecast to reach the 20-foot mark at 2 p.m., cresting at under 22 feet later tonight.

“Highway 211 is not anticipated to close,” an OES Tweet states. “Livestock should remain on high ground.”

New river forecast as of 8:41 a.m. indicates the Eel River at Fernbridge is expected to exceed Flood Stage of 20 feet around 2 p.m., today, February 14, cresting at under 22 feet late tonight. Highway 211 is not anticipated to close. Livestock should remain on high ground.

The Flood Watch advisory from the NWS:

* Until 4 PM PST this afternoon

* Moderate to heavy rain is expected through this afternoon.
Additional rainfall totals of 1 to 3 inches are expected, with
localized higher amounts. Snow melt may also contribute added
runoff.

* Rapid rises on small rivers and creeks, along with mud and
rock slides or debris flows in the vicinity of recent burn
scar areas are possible with heavy rain. Some main stem rivers
are also forecast to reach flood stage. Ponding of water on
roadways will also be possible.