Big Changes Considered for 101 Through Eureka 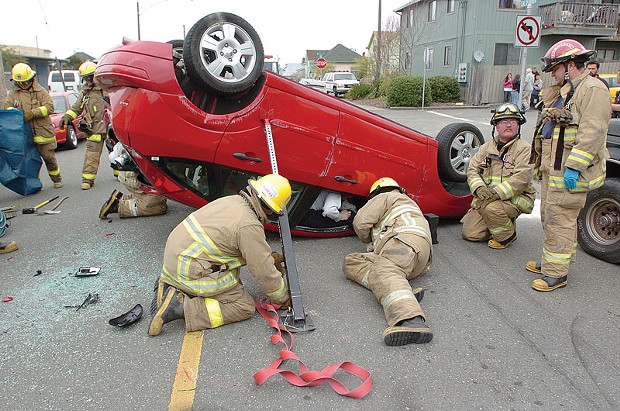 Few people drive through Eureka for the fun of it. If you approach the town from the north during the morning commute, you're often greeted by a long line of stalled traffic waiting to get through the intersection at V and Fourth streets. On a bad day, the back-up may begin out on the freeway. Once you get past V Street, the same situation repeats at R Street.

The signals never seem to synchronize, so that you have to stop at a lot of red lights as you drive through town. Then, on Broadway, some of the intersections are almost surreally bad and making a left turn can feel like a life-threatening venture. And that's if you're a driver, in the relative safety of a vehicle, to say nothing of the poor pedestrian trying to cross Broadway, or Fourth or Fifth streets in the many areas that lack traffic signals.

Bicyclists also take their lives in their hands, scuttling along the narrow shoulder of the street between the 30 mph traffic and parked semis, ever on the lookout for opening car doors and vehicles scooting in front of them to grab a parking space.

According to the California Office of Traffic Safety, among 94 similar sized cities throughout the state, Eureka had the second highest number of pedestrians hit on its streets in 2016 and 11th highest number of accidents involving bicyclists. Overall, it had the 17th most injury collisions of California cities with populations between 25,000 and 50,000.

But in many ways, Eureka’s challenges are the same as those faced by other cities across the nation with major highways funneling into their congested city streets. Some cities try to solve this problem with bypasses and Caltrans did at one point consider that option for Eureka. But it didn't happen here, and now public officials are trying to figure out how to make the main route through town more — well — drivable. 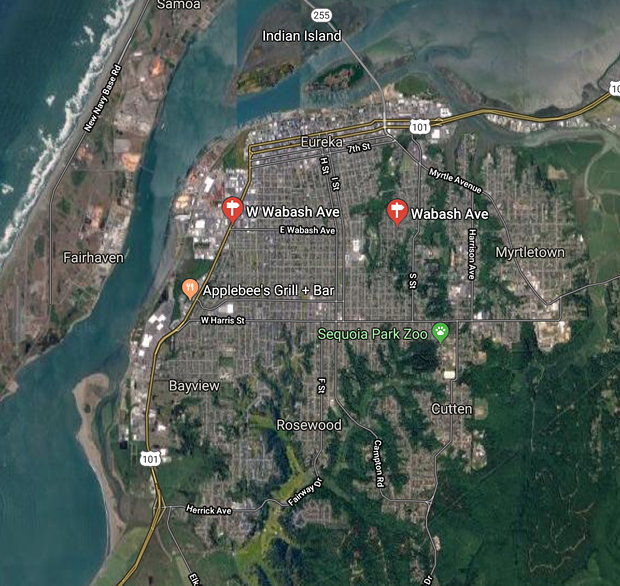 The chief players in the traffic game are Caltrans, the city of Eureka and the Humboldt County Association of Governments (HCAOG). Caltrans legally owns and manages U.S. Highway 101, which includes all of Fourth Street, Fifth Street and Broadway. The city is responsible for managing everything alongside the roadway and HCAOG holds the purse strings for the state and federal transportation funds that can be used in Eureka. Collectively, the entities are considering some big changes.

Fourth Street, north of R Street, carries two lanes of traffic, and Caltrans argues that simply isn't enough room to carry all the vehicles coming in from the freeway. Once you pass R Street going south on Fourth Street, the roadway opens up to three lanes and the traffic eases noticeably.

Caltrans intends to add a third lane to the northern section of Fourth Street. It won't physically expand the roadway but, instead, will eliminate parking on both sides of the street, re-stripe the pavement to three lanes and, somehow, end up with enough room for a 5-foot bicycle lane on one side of the street and a 3-foot shoulder on the other. Once the traffic has enough room to proceed freely, the cars will naturally group themselves into "platoons" as they pass through green lights and stop at red lights, leaving gaps in the flow of vehicles, according to Caltrans.

But not everybody is happy with this plan, which has been discussed at several HCAOG board meetings.

At the Nov. 18 meeting, City Councilmember Natalie Arroyo wondered how crossing an additional lane of live traffic could possibly be safer for pedestrians and Colin Fiske of the Coalition for Responsible Transportation Priorities disliked adding traffic lanes on principle. But Caltrans Project Manager Jeff Pimentel argued that, when traffic isn't congested, there are a lot more gaps between vehicles and the safest time to cross the street is when there are no cars coming. Moreover, if there is no parking, it's a lot easier to see what's coming down the road, he said.

"How is three lanes safer for a pedestrian?" asked Arroyo.

"If you left everything else the same, common sense would say that crossing three lanes is not as good as two," Pimentel replied. "But with getting vehicles efficiently through, creating those gaps, eliminating the parking, adding the bike lane, increasing the visibility, the high-visibility crosswalks, there is a net positive for (pedestrians) and bikes."

Pimentel also pointed out that Fifth Street, which has three lanes of traffic and less congestion, has only half the collision rate of Fourth Street, with its jammed-up two lane roadway.

Arroyo was still not satisfied.

"I get the idea that with more platooning, there's more gaps and a lot of these other features sound good ... But I'm just hung up on this idea that the additional lane is a safety element for pedestrians, " she said. "I think about the turn from Myrtle Avenue onto Sixth Street, where there is that pedestrian activated beacon there: It is very visible and it's an enormous boon when people are crossing. … I would love for [similar traffic beacons] to be considered if this project is to move forward."

Fiske also had problems with the project.

"We do support most of the elements of the project, especially the things that are focused on bike and (pedestrian) safety," he said, "but the addition of the third lane for that one section we do not support. There is quite a bit of research on what the effect of adding lanes and widening roads is for safety, and most of that indicates that it increases collisions and increases the severity of collisions ... We are not supporting the project at this time because of that."

Caltrans also plans to re-surface Fourth Street and replace the storm drains near the curbs, aiming to eliminate the giant puddles of rainwater that accumulate near the sidewalks.

In addition, Caltrans intends to place bulb-outs, those little traffic-calming curb extensions that city planners love and some drivers hate, along the shoulders of 101 throughout the length of the highway in Eureka. That, Pimentel argues, would reduce the amount of traffic space that pedestrians have to cross by 10 feet.

Caltrans also has other projects on its plate to subdue the Eureka traffic. Motorists who use Fairfield Street as a shortcut between the old Eureka Mall and Wabash Avenue will soon find that option gone. Traffic planners are trying to tame the nightmare intersection at Wabash and Broadway by blocking off Fairfield Street, turning a five-legged monster into a more manageable four-legged beast. That means that most drivers will have to spend less time sitting at the very long red lights on Broadway or Wabash Avenue, waiting for everybody and his brother to take their turns crossing the road. 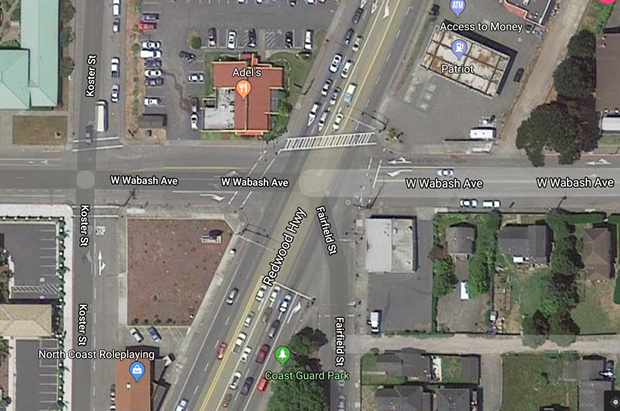 Pedestrians are also slated to benefit from some improvements. Curb ramps will be made ADA-compliant, making it possible for folks in wheelchairs or electric carts to cross the street wherever they want to. High-visibility crosswalks will be placed at unsignalized intersections and splitter islands will be placed in the middle of Broadway to make crossing easier for pedestrians. New traffic signals will be constructed at L Street, on both Fourth and Fifth streets. 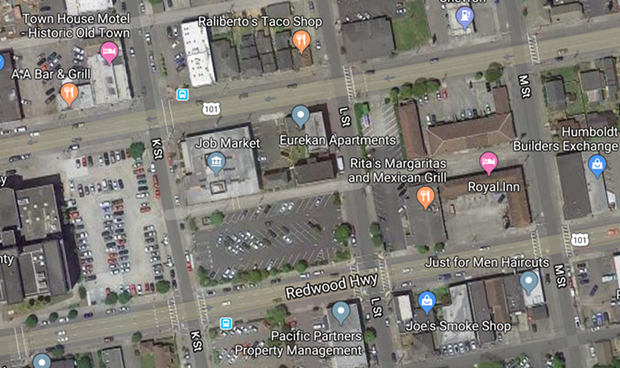 One amazingly simple pedestrian safety improvement is to eliminate the crosswalks on the "downstream" side of a one-way street. Imagine that you're a driver trying to make a right turn onto Fifth Street from D Street. All your attention is on the traffic coming from your left, and you may not even notice the poor guy or gal trying to cross the street on your right. The results of this all-too-human error can be catastrophic. 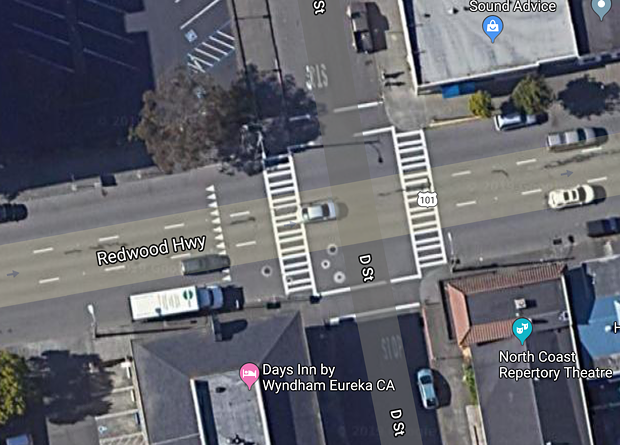 Additional projects include possibly extending Fourth Street into the Balloon Tract to connect with Koster Street, though the reasoning for this change was not immediately made clear. A new stoplight is slated to be constructed at Broadway and Hawthorne. A new bus shelter is planned for Fourth Street just outside the Red Lion Inn. The twin bridges over the Eureka Slough will be retrofitted.

Perhaps most importantly, engineers will try to improve the synchronization of the many traffic lights on 101 through town so drivers will be able to zip through Eureka with a minimum of stops, which saves carbon emissions.

HCAOG has just issued a Request for Proposal to develop a corridor plan "to reduce congestion on the most highly traveled corridor in the city of Eureka by providing more transportation choices for residents, commuters and visitors ... while preserving the character of the local community and creating opportunities for neighborhood enhancement projects."

This will all be discussed at a public meeting to be held on Thursday, Feb. 28, at 5:30 p.m. at the Wharfinger Building, 1 Marina Way, in Eureka. Caltrans planners and traffic engineers will be there with diagrams and drawings, prepared to answer questions.