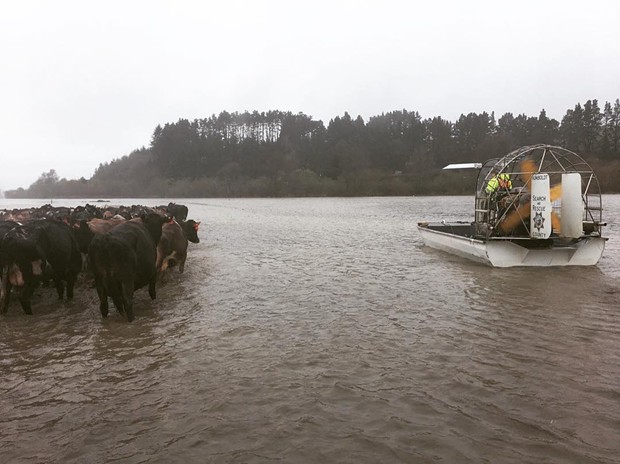 Roads are flooding, rivers are rising and the Coast Guard is urging boat owners to check on their vessels in the wake of record rainfall over the last two days that has inundated the region.

According to the Humboldt County Office of Emergency Services, the local Red Cross has opened an evacuation center at the Fortuna Fireman’s Pavilion, located at 9 Park St., “for residents impacted by flooding to receive information about resources available.”

The center is slated to remain open until 4 p.m. but that may be extended depending on need.

The Eel River is expected to reach 53.2 feet in Scotia around 3 p.m. and to hit 25.7 feet around 4 p.m. today at Fernbridge, the later a height that hasn’t been seen since February of 1986, according to NOAA historic records. The bridge has been closed since this morning due to flooding on Highway 211.

“Blue slide road is open as a detour, but drive slow! The road is wet, narrow and bumpy and there will be increased traffic. There are people and animals who live right off the side of Grizzly Bluff and Blue Slide, be mindful of them and watch your speed,” a Ferndale Volunteer Fire Department Facebook post states. 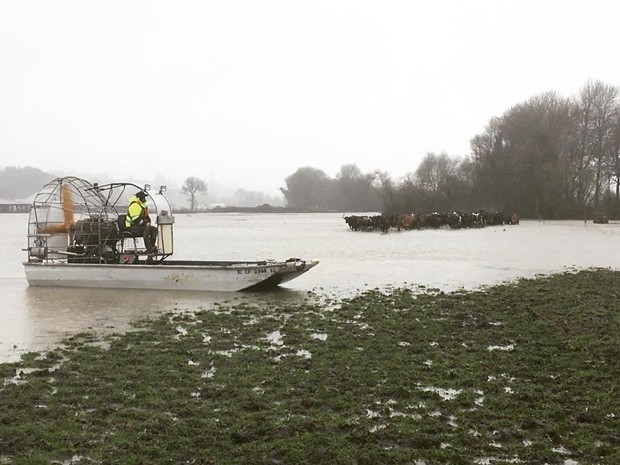 The Mad River is also slated to hit flood stage, reaching up to 23.6 feet.

Eureka rainfall totals from the National Weather Service show Monday and Tuesday were record-breakers at 1.66 and 2.56 inches, respectively. So far, February has seen 13.58 inches, compared to a norm of 5.63 inches. That does not include today’s totals.

Post from the Humboldt County Office of Emergency Services:


The local Red Cross has opened an Evacuation Center at the Fortuna Fireman’s Pavilion (9 Park St, Fortuna) for residents impacted by flooding to receive information about resources available. This center is supported by the Humboldt County Department of Heath and Human Services and will be open until 4 p.m. today, Wednesday 2/27. At that time, the need for further assistance and continuation of the center will be evaluated.


Release from the U.S. Coast Guard:


MCKINLEYVILLE, Calif. – The Coast Guard urges mariners and vessel owners to inspect vessel moorings due to high flood warnings and fast moving currents for all rivers in Mendocino, Humboldt and Del Norte Counties.

An example of a boat that broke free from its moorings occurred this morning when Coast Guard Station Noyo River received several calls reporting a 55-foot charter vessel named TREK II breaking free off its moorings inside the Noyo River basin in Ft Bragg, CA. The Coast Guard quickly sent crews aboard two 47-foot Motor Life Boats to attempt to secure the TREK II but due to the high speed of the river current, reported at 6-8 knots inside the basin and speeding up to 12 knots at the Noyo River jetties, they were not able to recover the adrift vessel. The TREK II grounded itself on rocks a few hundred yards of the north jetty tip, below Soldier Point Park. No one was onboard, and no injuries were reported.

The Coast Guard Chief of Response for the California North Coast Sector, CDR Brendan Hilleary advises “owners must routinely verify their vessel and mooring line conditions during periods of adverse weather, extreme high tides and fast river flows”. Citizens are encouraged to call 911, or call the Coast Guard directly at (707) 964-6612 in the Ft Bragg region, or (707) 839-6113 for any California North Coast maritime incident.