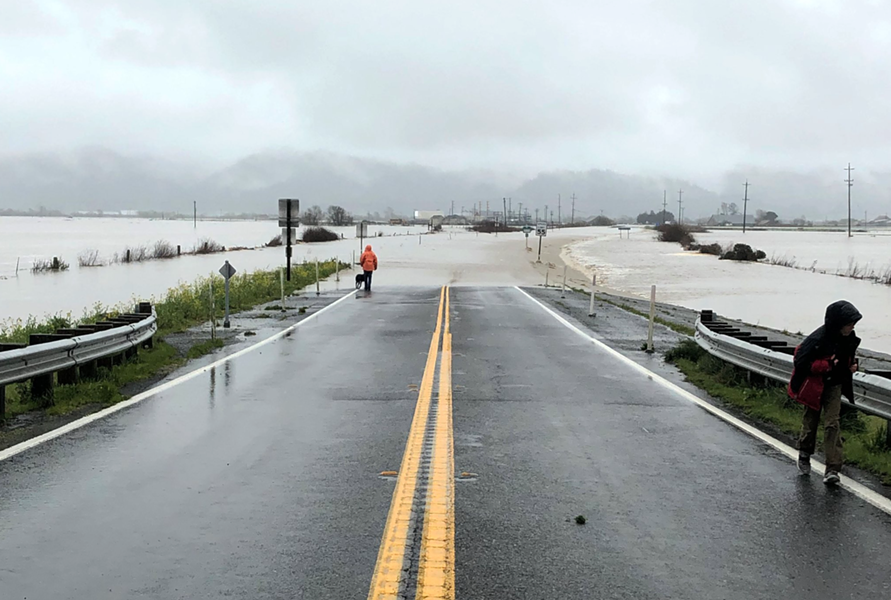 UPDATE:
The Humboldt County Sheriff's Office has identified the man who drowned in the Eel River's floodwaters Wednesday night as Benito Nunez-Rodriguez, 35, of Ferndale.

PREVIOUSLY:
The Humboldt County Sheriff’s Office has released the details of last night’s rescue effort in the flood waters of the Eel River, which was unable to save a man who’d tried to walk through 4 to 5 feet of water to his home.

According to a press release, the Sheriff’s Office dispatched deputies to a residence in the 800 block of Sage Road in Ferndale on a report of a man who’d been overtaken by flood waters and three people trapped inside a tractor.

The deputies learned that the man had left a barn at about 7 p.m. and attempted to walk through the flood waters to his nearby home. He then became “distressed by the fast moving current” and two adults and a juvenile attempted to rescue him with the tractor.

But the tractor stalled in the high flood waters before it could reach the man, stranding the three people inside, who soon lost sight of the man they were trying to save. Once on scene, deputies also learned that three more juveniles were inside a nearby residence, stranded by the floodwaters.

The Sheriff’s marine unit, search and rescue posse and the Ferndale Volunteer Fire Department all responded to conduct a rescue effort. The marine unit was able to reach the tractor and successfully ferry the three people trapped inside to safety, as well as the three juveniles in the residence.

A Coast Guard helicopter also responded to search for the missing man but, due to dangerous conditions, the search was suspended shortly before 11 p.m. Deputies resumed the effort this morning, and found the man dead. The release does not specify where.

The Humboldt County Coroner’s Office is withholding the man’s name until his family can be notified of his death.

Editor's Note: This story was updated to correct an error regarding the time that search efforts were suspended. The Journal regrets the error.

On Feb. 27, 2019, at about 8:20 p.m., Humboldt County Sheriff’s deputies were dispatched to a residence on the 800 block of Sage Road in Ferndale for the report of an adult male victim overtaken by flood waters and three subjects trapped inside a tractor.

The reporting party told dispatchers that at about 7 p.m., the male victim attempted to walk to his residence from a nearby barn through approximately 4 to 5 feet of flood waters when he became distressed by the fast-moving current. Two adult subjects and one juvenile attempted to rescue the victim by driving a tractor through the flood waters. The tractor stalled due to the high water prior to the subjects reaching the victim. The subjects lost sight of the victim while attempting to rescue him. Deputies also learned that three additional juveniles were trapped inside of the residence due to flood waters surrounding the home.

The Sheriff’s Marine Unit, Special Services Unit, Search and Rescue Posse and the Ferndale Volunteer Fire Department arrived to conduct a search and rescue for the subjects. A Sheriff’s Marine deputy and a Search and Rescue Posse member were able to reach the trapped subjects on the tractor utilizing the Sheriff’s jet boat. The three subjects on the tractor were rescued and transported to a safe location. The three juveniles inside the residence were also rescued and transported to a safe location.

A United States Coast Guard helicopter assisted Sheriff’s deputies and posse members in searching for the outstanding male victim. Due to dangerous conditions, the search was suspended just before 11 p.m.

The name of the deceased is being withheld at this time and will be released by the Humboldt County Coroner’s Office following all next-of-kin notification.