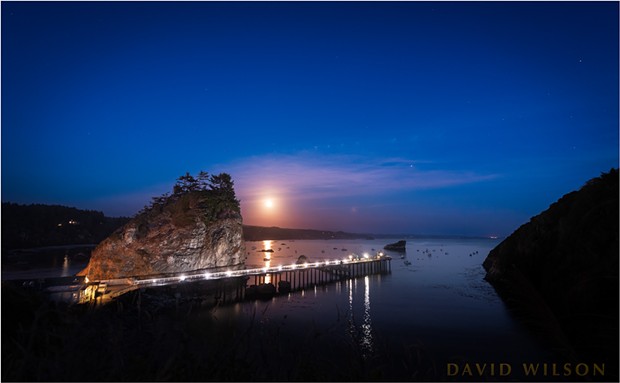 In January of 2000, the Trinidad Rancheria purchased the rundown pier in the town harbor, along with nine adjacent parcels of commercial land, including a boat launch, bait shop, vacation rental and the Seascape Restaurant from a private owner. With the help of several state and federal grants, the Rancheria replaced the rotting wood pier with a concrete and steel dock. It also replaced the Seascape's septic system, constructed two public restrooms, removed the illegal fish cleaning station at the pier and installed a stormwater capture and treatment system for runoff from the pier, improving the water quality in Trinidad Bay.

The Trinidad Pier is more than just a quaint and picturesque addition to the landscape. It services a fleet of commercial winter crab fishing vessels, as well as numerous year-round commercial and sport businesses. It also contributes heavily to the city's economic base.

The Rancheria, located a half mile south of the city of Trinidad on Scenic Drive, has generally been seen as a good neighbor. In addition to the harbor improvements, it resurfaced a mile of decaying road on Scenic, and has taken on the responsibility of being the designated shelter in the event of an emergency.

But over the past two years, the Rancheria has been doing something that is raising eyebrows in Trinidad. It has petitioned the Bureau of Indian Affairs to place its harbor property into federal trust, which would effectively remove it from the city's jurisdiction.

What does that mean? Right now, the Rancheria owns its harbor property in "fee simple," just like any other homeowner. If you own your own house, you may hold the deed, but you still have to pay property taxes to the city (or county) in which you live and you must adhere to the city's planning and zoning regulations. If you decide to open a factory in a residential neighborhood, you can count on your neighbors complaining and you can count on the city or county denying you the necessary permits.

Federal trust is altogether different. The only oversight agency is the federal government, through the Bureau of Indian Affairs (BIA). The BIA encourages historical Indian reservations to get their lands into trust status, arguing that the tribes are sovereign nations and should not be hampered by state regulations.

The Rancheria's rationale for seeking trust status is puzzling. Unlike the Yurok Tribe or the Hoopa Tribe, the Trinidad Rancheria was created in 1906 as a refuge for displaced Indians of many different tribes, including Yurok, Wiyot, Tolowa, Chetco, Karuk and Hupa people. The Rancheria was endowed with 60 acres on the bluffs along Scenic Drive, for that specific purpose. The Rancheria says that by placing the harbor into trust, it will regain ancestral lands. But to literally do this, they would have to reclaim a good chunk of northwestern California. And the harbor does not have any direct historical tie to the Rancheria, other than the land purchased less than 20 years ago. The Rancheria plans to construct a visitor's center on the property but it could do that just as well under fee simple.

This has many people wondering — both Trinidad residents and state agencies — why the Rancheria wants to sidestep state and local regulation on a potentially lucrative piece of real estate. The questioners include many Native American people who are not affiliated with the Rancheria.

"The Yurok Tribe maintains a standing objection to the Bureau of Indian Affairs and the U.S. Department of the Interior taking into trust any land for Trinidad Rancheria, or any other Tribe, within Yurok Ancestral Territory," states a letter written by Yurok Tribal Chair Thomas P. O'Rourke, Sr., to the BIA on April 17, 2017. "All of the parcels in the Rancheria's fee-to-Trust application are located outside of Trinidad Rancheria and within the exterior boundaries of Yurok Ancestral Territory, defined by the Yurok Constitution and federal case law."

The letter continues: "The parcels ... contain areas of cultural significance to the Yurok Tribe. The area in question is within the Yurok Village of T'Suri. ... It is the responsibility of the Yurok to ... protect the many documented archaeological and culturally significant sites located within the Yurok Ancestral Territory. ... Among concerns that this fee-to-trust application bring up include viewshed concerns, Yurok family Village rights, Tribal rights and more."

O'Rourke referred the BIA to the tribe's general counsel, implying that legal action could be considered. Descendants of the original Native American people who lived in the vicinity of the harbor — the Tsurai Ancestral Society — are also displeased with the Rancheria.

"We have not sold any of our rights to, or agreed to be separated from, our ancestral lands," said Axel Lindgren III, chair of the Tsurai Ancestral Society. "The Trinidad Rancheria has historically performed projects that destroyed Tsurai village sacred sites, and their lack of knowledge about the village, or its important sites, have a major, significant negative impact on our ability to practice and preserve our culture. Once those places are destroyed, they are not replaceable .... Given the Tsurai have never sold their rights to this land, a trust action will forever deny us any chance at repatriation."

Lindgren's letter also hinted that Ryan Sundberg, who at the time was the Fifth District Humboldt County Supervisor, and still is a member and employee of the Trinidad Rancheria and a sitting California Coastal Commissioner, might have had a conflict of interest. (Sundberg was voted out of office in June and vacated his seat last month but remains on the Coastal Commission for one more meeting, the meeting next week when the commission will weigh in on the Rancheria’s proposal.)

State agencies also had a myriad of concerns, including giving away land that legally does not belong to the Rancheria. "The proposed transfer includes sovereign lands underneath the pier, boat launch ramp, and portions of the City’s beaches and bluffs. Trustees of legislatively granted lands are statutorily and constitutionally prohibited from selling or transferring sovereign lands," stated a letter from the State Lands Commission.

In a 2017 letter to the BIA, Trinidad City Manager Daniel Berman also raised a number of concerns.

"The [Environmental Assessment] (EA) does not have an adequate discussion of the public use and benefit that the harbor provides, nor how that will be protected,” he wrote. “The EA states that the Tribe must provide public access to the pier until 2032. That is only 15 years from now; what happens after that? The EA also states that Tribe would maintain public access to all open spaces, but this statement is very vague. What is the area covered, and through what mechanism would this be guaranteed?”

The city is also concerned about access rights to Trinidad Head, which is part of the California Coastal National Monument and contains emergency communications equipment and scientific atmospheric monitoring stations.

Parking is another issue.

"Could the Rancheria start charging fees to park, or close parking areas to the public?” Berman wrote in the letter. “Both would be nearly impossible under current state jurisdiction, but if trust acquisition changes that, those impacts should be analyzed. Launcher Beach, as the name implies, is heavily used for small boat beach launching. It is the only easily accessed sheltered beach for this purpose between Humboldt Bay and Crescent City. Could this access be closed, or charged for, post trust acquisition?"

Berman also said that the EA contained inaccuracies regarding the economic impacts of the trust action on the city.

"The city receives sales and use tax on Seascape Restaurant sales as well as the bait shop. These funds will be lost to the city in the event of federal trust status. The city has requests in to the state Board of Equalization to help quantify these amounts.

"The Rancheria operates a short term rental in the home above the Seascape. The city received almost $5,000 in transient occupancy tax (TOT) revenues from this rental in the last fiscal year that would be lost in trust acquisition. This is approximately 1 percent of the City’s total annual general fund revenue"

Others have environmental concerns.

"I oppose the transfer of the harbor/pier area into federal trust, because Californians would be giving up local control of this very scenic and sensitive part of California's coastline,” write Kim Tays, a former Trinidad resident. “The California Coastal Act (CCA) is an excellent state law that protects our coastal resources and provides excellent noticing requirements that allow for public participation in the coastal development permit (CDP) process, including the right to appeal decisions that could harm or negatively impact coastal resources. If this area is placed under federal status, public members would not enjoy the same noticing requirements and public participation they enjoy under the CCA. Under the National Environmental Protection Act (NEPA), there is no official public notice, only the federal register. While the public can submit comments, the federal process would not be as intuitive nor as easily accessible as the CCA process. And, once this area is under federal status, it is unlikely the public would have much influence over what development projects are allowed. … And, given the Trump Administration's disdain for environmental laws and protections and plans to slash the U.S. EPA's budget, it is highly likely that important federal environmental laws and protections could be dismantled or severely weakened during the next four to eight years; thus, opening this area up to harmful development projects and uses."

The California Coastal Commission will be reviewing this project at its March 7 meeting and must have all comments received by 5 p.m. tomorrow. Although the Coastal Commission does not have the final say on whether or not the project can be approved (that is up to the BIA), it can place conditions on the project which the BIA must agree to honor.

The email address for written comments is: EORFC@coastal.ca.gov. You need to reference “Agenda Item Thursday, March 7, Federal Consistency 10.b, App. No. CD-0006-18 (BIA, Trinidad).” You also need to include your name and address on your email and write whether you are “OPPOSED” or “IN FAVOR” in the upper right-hand corner of the first page. Comments are due this Friday, March 1, by 5pm.


Editor’s note: In the interest of full disclosure, Elaine Weinreb, who reported and wrote this piece, addressed the Trinidad City Council and wrote a letter to the Bureau of Indian Affairs in 2017 alerting both to the fact that while Environmental Assessment quantified the economic impact the proposed change would have on the county of Humboldt it offered no such analysis on the impacts to Trinidad, an incorporated city. In both instances, she did not advocate for or against the proposal but argued the Environmental Assessment should accurately address its impacts.