At least 10 agencies have now joined the search for two missing Benbow girls, who are believed to have wandered into the woods yesterday afternoon.

All available resources are being utilized by the search personnel, including National Guard satellite technology to track and coordinate search teams.
The sisters — Caroline Rose Carrico, 5, and Leia Dorice Carrico, 8 — are believed to have walked into the woods near their home in the 3000 block of Twin Trees Road south of Benbow sometime between 2:30 and 3 p.m. yesterday. The pair had wanted to go for a walk at 2:30 p.m. but their mother wasn’t ready. When she looked for them 30 minutes later, they were gone.

Family and neighbors searched the area until around 6 p.m., according to a press release, at which point they called the authorities, who quickly mobilized a search effort that continued through the night. 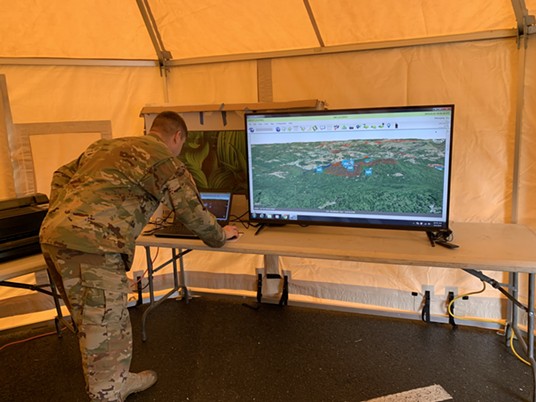 Additional agencies joined the effort this morning, including the National Guard, the U.S. Coast Guard and CalFire. According to the press release, the area consists of “steep, heavily wooded terrain.”

Officials are urging the public to avoid the area unless given express permission by the Humboldt County Sheriff’s Office. A public tip line has been established for any information regarding the possible whereabouts of the children at (707) 441-5000.

A press conference is planned for this afternoon.

The Humboldt County Sheriff’s Office is searching for two missing girls who are believed to have walked away from their home.

Rose Carrico, age 5, and Leia Carrico, age 8, were last seen at approximately 2:30 p.m. on March 1, 2019, outside of their residence, located on the 3000 block of Twin Trees Road in Benbow. The girls are believed to have walked off into the wooded area nearby their home.

The Humboldt County Sheriff’s Office was notified of the girl’s disappearance at about 6 p.m. on March 1. Sheriff’s Special Services deputies, Southern Humboldt Technical Rescue and CAL FIRE crews responded and conducted an initial search of the area throughout the night.

The search area consists of steep, heavily wooded terrain. Search teams from the following agencies are being utilized:

Mendocino County
Napa County
Del Norte County
State Parks
National Guard
United States Coast Guard
Sothern Humboldt Technical Rescue
CAL FIRE
Sheriff’s Search and Rescue Posse
Humboldt County Sheriff’s Office
All available resources are being utilized by searching personnel. Through the collaborated efforts of all the involved agencies we are working to resolve this incident as quickly and safely as possible. Rescue personnel will be searching the immediate and surrounding areas and constantly evaluating the conditions during the search efforts.

The public is advised to please avoid the area while search teams are working unless given permission by the Humboldt County Sheriff’s Office.

A public tip line has been established for any information regarding the possible whereabouts of Rose and Leia Carrico at (707) 441-5000.

A press conference for members of the media has been scheduled for 2 p.m. today, March 2, 2019, at the Benbow Lake State Recreational Area (445 Lake Benbow Dr. Garberville).

Further updates will be provided when available.

Anyone wishing to subscribe to the Sheriff's Office automated press release notification system can do so by visiting: https://humboldtgov.org/list.aspx?ListID=219