It's about 5 p.m. on March 10 and under a blue sky, a handful of people walk down Goble Lane in Ferndale, where family and friends of Benito Nuñez-Rodriguez will place a cross with his name a little ways away from where a search team found him March 1, about 12 hours after he went missing in the floodwaters of the Eel River.

Aurelio Baltzar and Oscar Dominguez find a fence post and start to drill the cross into place. It reads: “Benito Nuñez-Rodriguez / Por siempre en nuestros corazones / Forever in our hearts.” As they are mounting the plaque, Michelle Rodriguez, a family friend of 14 years, begins giving out sunflower seeds to people, hand by hand, while sniffling back tears. She remembers Nuñez-Rodriguez talking about how beautiful the sunflowers are when in full bloom along the fence line.

The group surrounds the cross with flowers and candles before Rodriguez drops the sunflower seeds on the grass close by. She invites the others to place candles and seeds for the memorial.

“I know some of you didn’t know Benito,” she says. “He was a loving father and a big hearted, unique and funny guy. He loved to laugh.”


Nuñez-Rodriguez drowned in the floodwaters of the Eel River on Feb. 28 when he tried to walk through 4- to 5-foot deep flows to get from the barn he was in to his nearby home. According to the Humboldt County Sheriff’s Office, he clocked out of work at the Alexandre Acres dairy barn around 5 p.m. but waited a while before trying to get home. The next day, searchers found a rowboat that had been in the barn a ways downriver, leading some to speculate that he’d tried to paddle home. But the sheriff’s office says his wife, Trina Nuñez-Rodriguez, who was home with their four children, heard him calling out for help around 7 p.m.

With their youngest son, 10, and the help of a neighbor, Trina tried to rescue him by driving a tractor into the flood waters toward him. But the tractor stalled before it could reach him and Trina ultimately lost sight of her husband. Numerous agencies launched a rescue effort but, it was suspended after two hours at 11 p.m. due to dangerous conditions. The next morning, deputies continued the search and found Nuñez-Rodriguez dead in a nearby field southwest from where the tractor stalled.

Nuñez-Rodriguez grew up in Colima, in the Mexican state of Manzanilla, and came to the U.S. when he was 16 years old. According to Rodriguez, he, his wife and their four children moved to Humboldt County from Medford, Oregon, last summer. With the help of Rodriguez and her husband, Nuñez-Rodriguez landed a job at Alexandre Acres dairy, herding cows from field to field and doing other odd jobs.

While working as a firefighter in Oregon, Nuñez-Rodriguez reportedly told his son that if anything were to happen to him, Nuñez-Rodriguez wanted his body sent to Mexico, where his parents and siblings live. On March 11, the day following the memorial, Nuñez-Rodriguez’s body was sent to Colima to be buried, through Goble Family Mortuary in Fortuna. Two GoFundMe pages were set up to help Nuñez-Rodriguez’s family pay for the transportation of his body. They combined to raise $6,140.

Back at the March 10 vigil, Rodriguez starts to thank everyone one by one. She stops and tells a woman a story about Nuñez-Rodriguez and emphasizes his willingness to help others. Rodriguez says she used to have a pet chick she really loved that got very ill. Her only option was to euthanize it but she wasn’t able to go through with it. Nuñez-Rodriguez saw her anguish and took on the duty. He wanted to help her through the pain, she says.

Surrounded by Ferndale community members, friends of the Alexandres’ and friends and neighbors of Nuñez-Rodriguez, Carleigh Arnold sings “Amazing Grace” and then prays.

Neighbors Teresa and her daughter Alex Alvarado say they have come the vigil to support Nuñez-Rodriguez’s family. They spend a lot of time walking down the road where the search team found his body, they say.

“It’ll be sad to walk this path in the summertime,” Teresa Alvarado says in Spanish. 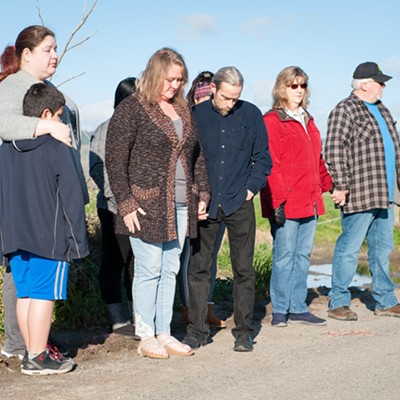