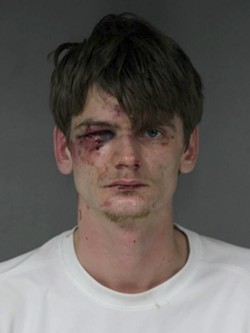 After a criminal grand jury targeting him opted not to issue an indictment, a McKinleyville man suspected in the stabbing death of David Josiah Lawson hopes the jury’s decision “will allow law enforcement to investigate the case from a new perspective and seek the truth,” according to a press release from his attorney.

“Kyle Zoellner would like to thank the jurors of Humboldt County for their consideration and commitment to finding the truth in the grand jury matter involving Josiah Lawson,” states the release from Deputy Public Defender Luke Brownfield. “Mr. Zoellner has now been prosecuted twice for a crime he did not commit. Each time the finder of fact has found that there is not even probable cause to believe Mr. Zoellner committed a crime.”

Since Arcata police arrived at the scene of a chaotic house party before dawn on April 15, 2017, to find Lawson, 19, bleeding from a multiple stab wounds, including one to the heart, Zoellner has been the prime suspect. Bloodied and bruised, reportedly from at least two separate fights with Lawson and his friends that night, he was arrested at the scene and charged with Lawson’s murder. But just weeks later, a Humboldt County Superior Court judge dismissed the case, finding prosecutors had failed to present enough evidence to hold him to stand trial on the charge.

In the ensuing months, Arcata police continued to build a case against him, re-interviewing witnesses and pursuing additional forensic testing on evidence in the case. In November, then interim Police Chief Richard Ehle turned his department’s investigation over to the Humboldt County District Attorney’s Office, saying investigators had found “unequivocal physical evidence” linking a specific suspect to Lawson’s death.

But District Attorney Maggie Fleming seemed unsure of the strength of that evidence, which was found on a knife recovered at the crime scene and which police believe to be the murder weapon.

“The interpretation of the analysis of DNA on the knife is of course critical to the case,” Fleming said. “That is one of the issues we found incompletely resolved in the case file we received form the Arcata Police Department, therefore we requested additional information on the analysis from the California Department of Justice.”

On Feb. 28, Fleming’s office convened a criminal grand jury to investigate the killing with Zoellner its target, according to minutes from the federal lawsuit Zoellner brought against the city of Arcata. The jury heard testimony from 25 witnesses, including “forensic analysts, including two separate DNA analysts,” according to the grand jury’s report, a copy of which was obtained by the Journal.

“After a review of all the available testimony and evidence, including the opportunity to subpoena witnesses of our own choosing, based upon the state of the evidence at this time, the grand jury has declined to indict any person in the stabbing death of David Josiah Lawson,” reads the report, which was signed by grand jury foreperson “#3.”

Criminal grand jury proceedings are confidential and — in cases in which indictments are not handed down — their transcripts are kept under seal. In Humboldt County, the criminal grand jury is comprised of 19 members, 12 of whom would need to agree that there is probable cause to believe a suspect has committed a crime in order to hand down an indictment.

While a press release from the DA’s office announcing the grand jury’s decision took on an air of finality — saying that because the grand jury declined to indict, “no charges will be filed in the case" — there is nothing to prevent prosecutors from again bringing a case against Zoellner, or anyone else, in the future.

And in an email to the Journal, Fleming made as much clear, saying the grand jury’s decision “has no effect on the possibility of future investigation or prosecution of the case.”

APD’s new chief, Brian Ahearn, who was hired in January, after the department had turned the case over to Fleming’s office, said Wednesday that detectives will work to find new witnesses and leads in the case.

Meanwhile, on the Humboldt State University campus, where Lawson was a sophomore at the time of his death, more than 100 people attended a protest demanding justice. Another vigil — commemorating the 23-month anniversary of the killing — is planned for 5:30 this afternoon in front of the Humboldt County Courthouse. Check back for coverage of both events later today.

See the full press release from Brownfield copied below:

Kyle Zoellner would like to thank the jurors of Humboldt County for their consideration and commitment to finding the truth in the Grand Jury matter involving Josiah Lawson. Mr. Zoellner has now been prosecuted twice for a crime he did not commit. Each time the finder of fact has found that there is not even probable cause to believe Mr. Zoellner committed a crime.

Mr. Zoellner hopes the Grand Jury’s decision will allow law enforcement to investigate the case from a new perspective and seek the truth instead of trying to “hold someone accountable.” Without truth, there will be no justice.