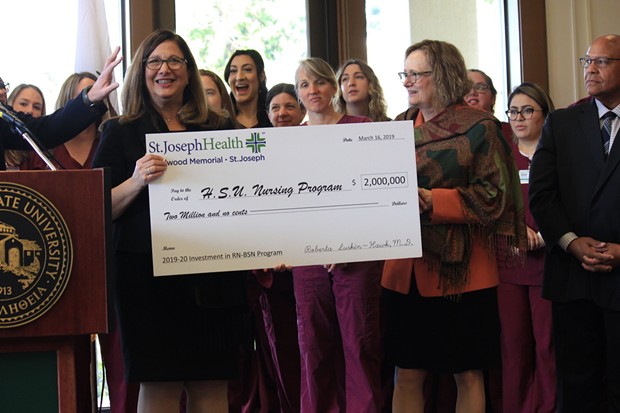 Humboldt State University is bringing back its nursing program and St. Joseph Hospital has a committed a $2 million grant to help implement and sustain the new partnership between the College of the Redwoods and HSU. The program is hoped to help address health care shortages and “keep quality healthcare close to home” by allowing nursing students from CR to transfer to HSU in order to obtain a Bachelor of Science degree in nursing, which, according to State Sen. Mike McGuire, is a needed standard in most healthcare facilities. 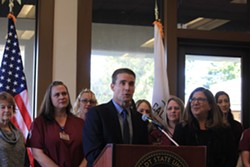 “One of the top issues that we have heard about in the last four years is a lack of a Bachelor of Science in nursing at Humboldt State,” McGuire said. “We are going to be expanding the pipeline of the qualified nursing professionals here on the North Coast. College of the Redwoods has a LVN to RN program at their campus, but we know their numbers must increase to be able to meet the demand.”

McGuire said Humboldt County needs about 70 nurses a year to graduate from the program and hopes the new partnership will be able to meet those demands. The program will have four main components that will address needs specific to the North Coast, including rural needs, cultural humility, leadership and behavioral health.

“This is truly a game changer for the North Coast,” McGuire said. “There is a severe shortage of nurses throughout northern California. This program will create hundreds of family sustaining careers in the first few years that it has been launched.”

One of the main benefits touted about the new partnership is the ability for working nurses to continue their educations without having to leave the area. HSU President Lisa Rossbacher also attended the announcement and said the most important part of the program will be its ability to support the equality of healthcare on the North Coast. Rossbacher emphasized the program’s focus on cultural humility.

“Cultural humility is making sure that healthcare providers fully understand and appreciate the needs of the indigenous community,” Rossbacher said. “The program will break down the silos so that it is a more integrated approach.”

Roberta Luskin-Hawk, chief executive officer of St. Joseph Hospital, presented an honorary check to Rossbacher during the announcement and said the need for more nurses was “easy to recognize.” 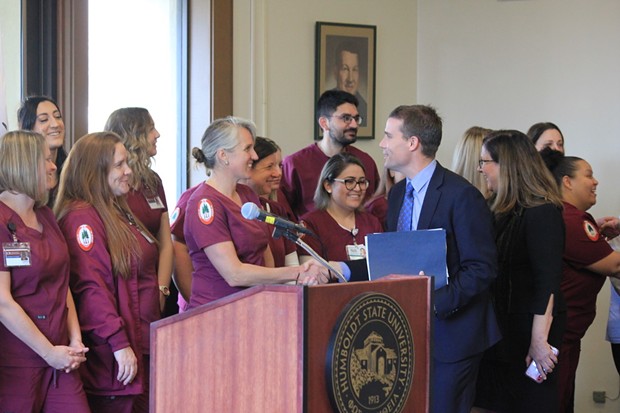 “We felt that it is really important to invest in our community,” Luskin-Hawk said.
She went on to say that the nurses in the program will be exposed to a variety of aspects of healthcare, including mental health, during their studies. One of the program’s future students is Celene O’Dell, a current nursing student at CR. O’Dell was formerly a dental hygienist but switched career paths because she “wanted to help people.”

“I just decided that I wanted to have more of an influence on helping people achieve health in their lives,” she said.

O’Dell said she plans on staying in the area if she can get hired but acknowledged that nurses sometimes have to travel to find work. She went on to say she is excited about the program and its future implications but what the area really needs is access to a Master of Science in nursing program.

“We are so grateful that this is happening but what we really need to push for is a graduate degree program,” O’Dell said. “It’s hard to recruit doctors to the area, so if we can get nurses trained as nurse practitioners that will really eliminate a lot of the difficulties for people seeking primary care.”

HSU hopes to enroll its first class in the program for the fall of 2020.

See a full press release from HSU about today's announcement copied below:

Health care leaders and elected officials from across the county were on hand as the grant was announced at Humboldt State University Saturday morning. Many of them, including Senator McGuire, have been part of the coalition that have been instrumental in establishing the North Coast Nursing Program.

“As a non-profit health care organization, St. Joseph Health, Humboldt County is blessed to be in a position to sustain the rich legacy of caring for our community that our founding Sisters chartered nearly a century ago,” said Roberta Luskin-Hawk, M.D., chief executive, SJH-HC. “It is with this deep understanding of our commitment to serve our dear neighbors that we enter into this momentous partnership with HSU.”

The $2 million grant is a major investment in enhancing health care and addressing the nursing shortage on the North Coast. SJH-HC is providing the grant through its Community Benefit program, which designates a portion of the organization’s annual operating expenses for investing in the health and wellness of the community.

“There is a severe nursing shortage on the North Coast and it’s impacting the health and well-being of patients and increasing the cost of delivering healthcare,” said McGuire, who has spearheaded the launch of the North Coast Nursing Program with Humboldt State and the College of the Redwoods. “We are truly grateful for St. Joseph Health stepping up and making a major investment to the nursing endowment and for the groundbreaking partnership of HSU and the College of the Redwoods who are leading the way to educate the next generation of nurses on the North Coast."

The RN to BSN program will allow registered nurses who already have an associate’s degree to complete their bachelor’s degree in nursing. The additional education will enable nurses to meet new hiring educational requirements some hospitals have implemented which require a BSN degree and allow them to prepare for leadership or advanced clinical training such as nurse practitioner roles. The program will also ensure the North Coast is educating its own nurses, which will make the entire healthcare system more resilient and create hundreds of family sustaining careers in the years to come. Nurses will be able to continue working while completing the program.

Based on discussions with health care providers throughout the area, the curriculum is focused on particular needs of the North Coast: preparing nurse leaders who understand health disparities, rural needs, and cultural humility, and who can advocate for the physical and psychosocial health of the region’s communities. On-site training will take place at St. Joseph Hospital and other health care facilities throughout the region.

In recognition of the grant, an endowed chair for the director of the program will be named in honor of SJH-HC.

HSU President Lisa Rossbacher expressed her gratitude to the many people who have worked to make this collaborative program a reality. “This partnership with St. Joseph, the community, and the College of the Redwoods is a wonderful example of how we can work together to address critical regional needs,” she said. “With Senator McGuire’s strong support, we are making major progress in bringing this plan to reality. This new program will benefit the entire region.”

Efforts to develop the RN to BSN program have been underway for nearly three years, following a pivotal gathering of health care leaders, HSU officials, and McGuire. At that meeting, there was broad agreement on the need for such a program and commitments to support it.

In the last few months, University officials and others have launched a campaign for the first phase of an endowment to support the program. The leadership shown by St. Joseph gives the effort significant momentum to meet the goal of enrolling the first students by Fall 2020.