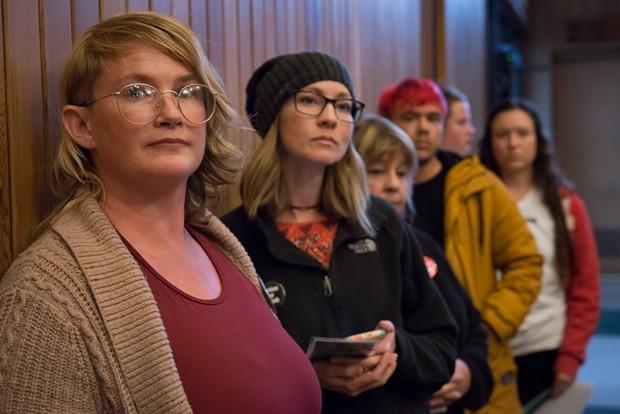 Almost two dozen people gathered in the Arcata City Hall lobby before tonight's city council meeting, prepared to ask the council to seek outside help in the David Josiah Lawson investigation after a criminal grand jury declined to hand up indictments in the case, sending it back to the Arcata Police Department for further investigation.

Lawson, a sophomore at Humboldt State University, who was fatally stabbed at an off campus party in the early morning of April 15, 2017. Kyle Zoellner, a 23-year-old McKinleyville resident, was arrested at the scene and charged with Lawson’s murder but a Humboldt County Superior Court judge dismissed the case, saying there was insufficient evidence to Zoellner to stand trial.

Interim Police Richard Ehle turned the investigation over to the Humboldt County District Attorney’s Office in November, telling the Journal there’s "unequivocal physical evidence” linking a specific suspect to the murder. On March 13, the Humboldt District Attorney’s Office sent out a press release reporting that a criminal grand jury convened Feb. 28 declined to indict anyone in connection to the crime and, “therefore, no charges will be filed in this case,” the release said. (In Humboldt County, a criminal grand jury consists of 19 people, 12 of whom must to find there is “probable cause” that a crime was committed by a suspect to hand up an indictment.)

Arcata Police Chief Brian Ahearn vowed to continue the investigation, saying that APD will re-interview witnesses and investigate old leads. A couple of days after the announcement, Lawson’s mother, Charmaine Lawson, came to Humboldt County and spoke at HSU and the Humboldt County Courthouse about her disappointment on the criminal grand jury’s decision. 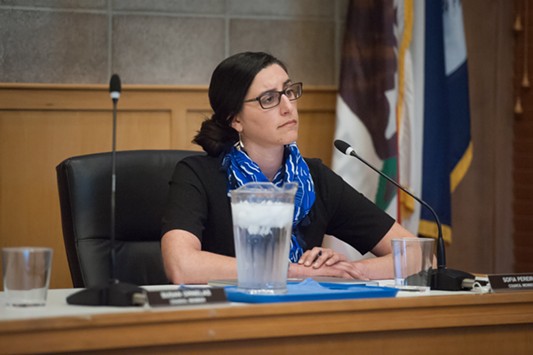 “We’re not going to stop fighting: This doesn’t end,” she told the crowd in front of the courthouse on Friday. “Thursday’s decision doesn’t end. (District Attorney) Maggie Fleming, if you can hear me, you have me fighting harder. I’m fighting harder.”

Between the turnouts at HSU and the courthouse, hundreds had gathered in support.

When the floor at the Arcata City Council meeting opened for public comment, 11 people stood and began to form a line behind the podium. Most of them urged the city council to write to the California Department of Justice to take on the case.

“We are angry and frustrated, but this is typical,” Jill Larrabee told the council. “No one is surprised with this outcome. We are asking you to do everything in all of your power to ask the DOJ to take on the investigation and prosecution of this case. … Each and every one of you has connections and has power, use your connections to get this out of Humboldt County. … We are not going anywhere.” 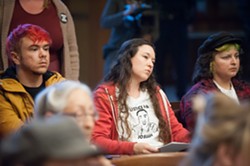 Most of the speakers also asked about the Police Foundation report. Last September, Arcata hired Police Foundation, a nonprofit, to investigate APD’s controversial response the night of Lawson’s death. According to a Sept. 10 memo, Arcata City Manager Karen Diemer said the nonprofit will “review the police department’s response and to make recommendations for improving major criminal events, including response to, and investigation of, catastrophic, multiple-victim and/or multiple-witness incidents in the future,” with the report expected by the end of last year.

During public comment this evening, Richard Kossow questioned the timeline.

“Six months ago, we were told that an organization called Police Foundation had been retained to look into how the Arcata Police Department dealt with this homicide in April of 2017. I’ve heard nothing since,” he said. “It seems to me that it’s time that we start to get some kind of understanding of what that investigation has shown or some acknowledgment from you that the investigation has gone on.”

At the end of the public comment period, Diemer addressed the concerns over the Police Foundation report, saying the city received communications with the nonprofit that has completed its investigation of the report. She said the final report should be expected by May, but added that if the report indicates anything that could impede the Lawson investigation, it would not be made public. But, she added, the council intends to make the report public as soon as it is able.

After the public comment period, Mayor Brett Watson addressed speakers’ calls for the California Department of Justice to intervene.

“We have sent letters to the Department of Justice and the Attorney General and we are working on new, refreshed letters — new letters — and a new call for their help to step in,” he said, adding that the city is also recruiting local politicians to solicit their connections to seek help from the state.