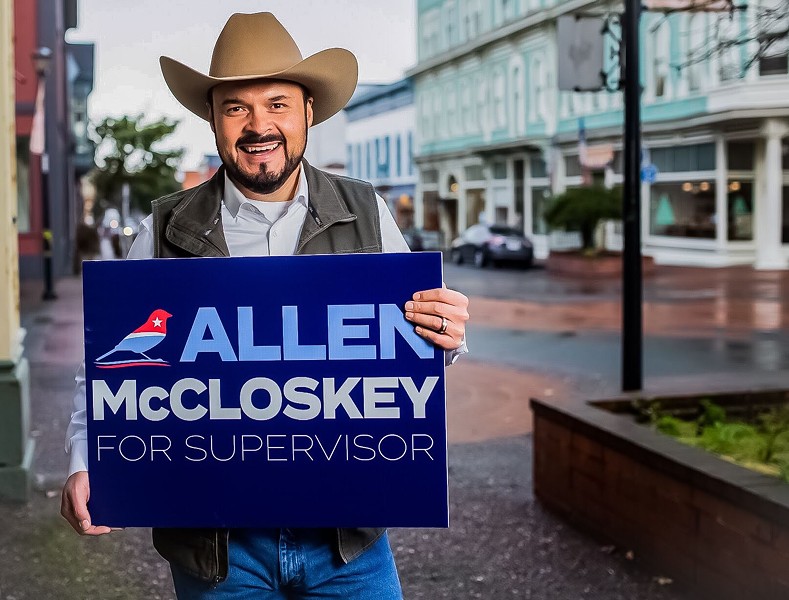 Allen McCloskey has withdrawn his candidacy to become Humboldt County’s next First District supervisor in the face of fraud and perjury allegations reported last week by the Lost Coast Outpost.

“The last two months (and more notably the last two weeks) have been incredibly difficult for me as an individual, for my immediate and extended family, for the campaign team, for our friends and for so many people who I love and admire,” McCloskey wrote in a 2,400-word statement posted to his campaign Facebook page yesterday. “This ordeal has been designed to cause an incredible amount of strain. The blog hit piece, the bias and one-sided reporting, endless personal attacks, have caused untold damage to family, friends and political supporters. … As a result, and after much reflection and careful consideration, I cannot in good conscience allow these forces to continue to damage my family, friends and colleagues. … For the time being, we will walk away from this particular campaign with our heads held high and our commitment to our collective vision intact.”

The Outpost’s Ryan Burns penned a lengthy and thorough investigative report last week, much of which focused on perjury and fraud allegations from 16 years ago. When Burns confronted McCloskey with the allegations during an interview, McCloskey responded that he’d been the victim of identity theft.

The allegations stem from 2003, when McCloskey was working as a consultant for Kleen Environmental Technologies, which was seeking a biomedical waste disposal permit from the Washington Utilities and Transportation Commission. According to transcripts of the commission hearings, it appears McCloskey forged a letter in support of Kleen’s application then lied about it. When called out on those lies, the transcript indicates McCloskey either suffered a medical emergency or feigned one, after which he allegedly fled the state.

When confronted about the allegations during an interview with Burns, McCloskey was somewhat evasive but essentially said an ex-boyfriend had stolen his identity and impersonated him at the hearing. He said he was just an intern and not there to be a part of “any of their shenanigans.” (In his report, Burns says he sent two attorneys involved in the case pictures of McCloskey and they confirmed he was the same man testifying before the utilities commission.)

In his statement, McCloskey denies writing the fraudulent letter and intones that he severed ties with Kleen when he determined the letter was forged, after which the company had a “non-citizen with a criminal record who needed to remain under the radar” testify in his place.

“Should I have set the record straight with the administrative court? Certainly and I wish I could go back in time,” McCloskey says in the statement. “I will only say that I was young and scared and decided to keep my distance.”

The statement goes on to attack Burns’ reporting, alleging that he “edited and altered my comments” and essentially ambushed him on what amounted to a political hit job. Burns, for his part, stated in a follow up story that no one associated with McCloskey's First District opponent's campaign contributed to his reporting and that he and the Outpost will “let our original story, and audio from our interview, speak for themselves.” Those interested can listen to audio for the full interview here and draw their own conclusions. (For our part, no major discrepancies were immediately apparent.)

For the time being, incumbent First District Supervisor Rex Bohn is running unopposed but tough social media chatter indicates those unenthused about his tenure are busily working to find another candidate to run against him in 2020.