We stood in the mouth of the cavern, looking out through a great broken crack in the blackness into the night as if through a window into another world. It fired our imaginations, conjuring mysteries in the night. What is it about caves that stirs us so inside? My thoughts wandered and stories began to play across my mind as my imagination took me to a time that might have been earlier that day. …

… Hiking the redwood forests of Humboldt County earlier in the afternoon, my two companions and I had stumbled onto a stone stairway in the woods. Its worn steps led up a hill and into the goosepen of a great redwood tree. We had all hiked this area before but none of us had ever seen the stairs or the tree, not even the hill it was on. I admit I was more than a little confused. I consider myself to have an excellent sense of direction and have never gotten lost in the forest before, but how could I have missed this until now? Were we where we thought we were? My companions were as confused as I.

The stairs seemed ancient, small ledges of rock covered in moss, lichen and fallen debris. They led up into the dark opening at the base of the tree where the redwood opened to accommodate them, widening as though it had been growing around the steps for a thousand years, enticing travelers to enter and explore its mysteries. We accepted the invitation. 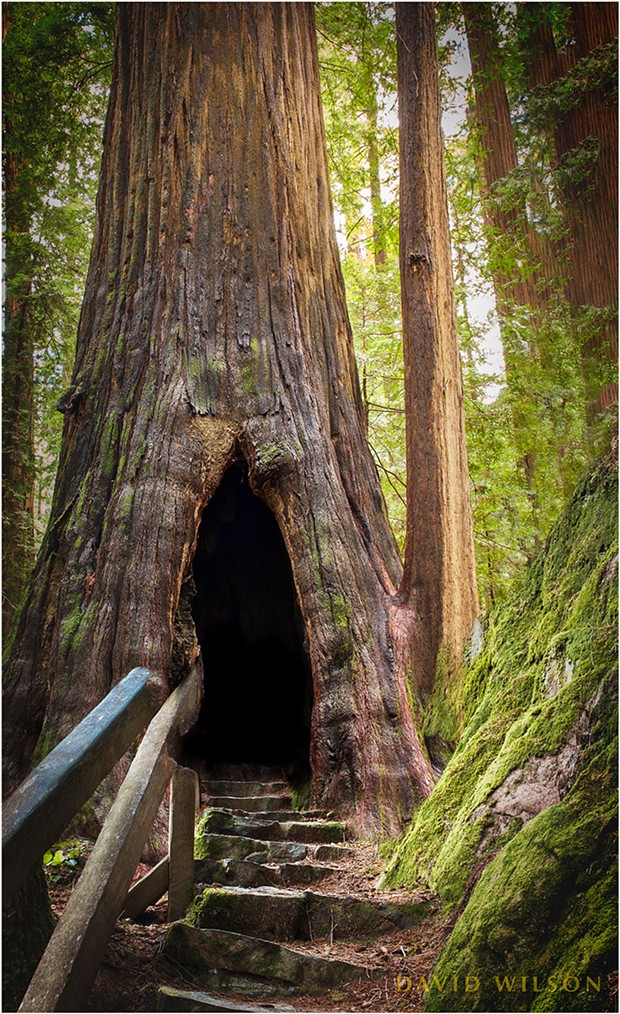 The steps climbed up and into the tree’s hollow, and then immediately descended again to vanish into the darkness underground. The beam of my headlamp revealed the staircase curving out of view in the shadows below us. We looked at each other there at the top of the stairs — to explore, or no? My companions flicked their own headlamps on in answer. Down we went.

Not far beyond the curve the stairs leveled off to rocky floor. It was rough and uneven, but wide enough for two abreast. Rock that had fallen from the ceiling and walls littered the floor. The air felt cold and heavy, thick with moisture and the smell of rock and soil, like the very breath of Earth itself.

We had traveled perhaps 50 yards when the path opened onto a circular room, its smooth walls hewn and shaped from the rock. At even intervals around its circumference three more openings in the walls marked where other passages beckoned to us. Our interest was piqued, but though we had headlamps, we were ill-equipped for spelunking and feared getting lost if we explored further. We would return to explore another time.

But upon turning around we found that our corridor branched both left and right. Two of us thought we had arrived via the left tunnel, and the other thought the right. None of us knew. We tried the left first. But it was not the way we had come, for it immediately branched into other tunnels. Yet when we turned around to retrace our steps we were confronted with another Y in the passage. Had it been there before? We would try both tunnels, we thought. But we were never sure we found that intersection again as we were confronted with branch after branch in the path.

Who knows how long we hiked? Or how far, for the cave was a bewildering maze of trails and stone staircases carved into the living rock, and without the ordinary references of daytime we had no sense of the passage of time. We knew only that we were lost in its inky blackness.

When our headlamps dimmed, we conserved batteries by sharing a single light at a time between the three of us. To run out of light would have meant the end. We had no idea where we were or where to go, so we pressed on, hoping to find a way to the surface. Where we could we took stairs or ramps leading upwards, but always it seemed they would turn back downward.

Our final headlamp’s beam was a dimming shadow of itself when a crack in the blackness ahead showed a patch of night sky with stars, and then the lights of civilization broke upon us. Our cave had brought us once again to the open air. We had entered from the redwood forest early that afternoon, and now it was some time in the night, at the beach. 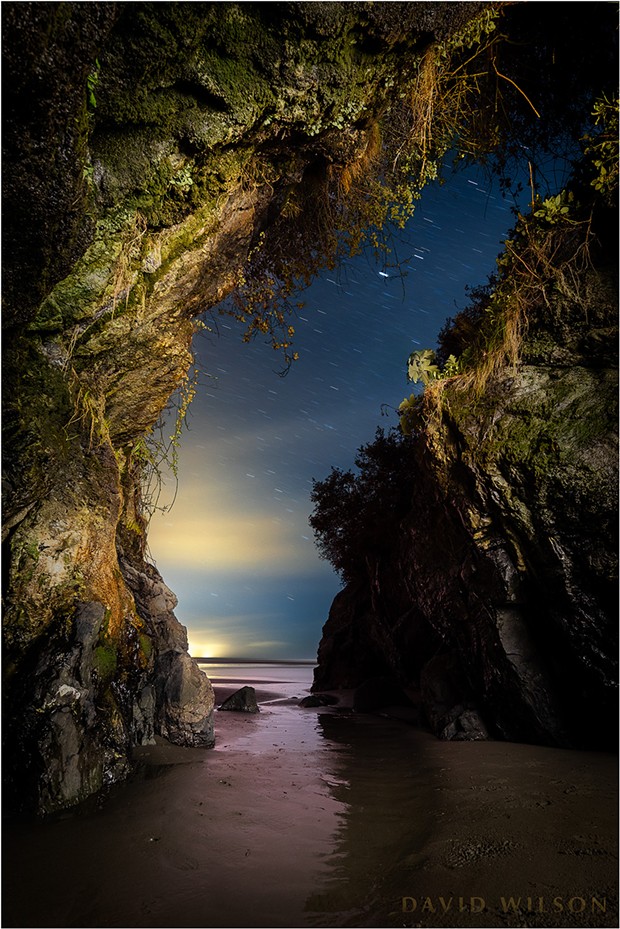 … I shook my head, grinning at my own thoughts as my mind returned to the present. I was there again at the Moonstone Beach cave with my companions to take photographs in the North Coast’s night light. What stories had they experienced? But for me the world was normal again. Or seemed to be. I turned around and sent my light back into the cave. One last look, I thought. And there it was, the same old Moonstone Beach cave I’d always known, but I wasn’t sure I was glad.