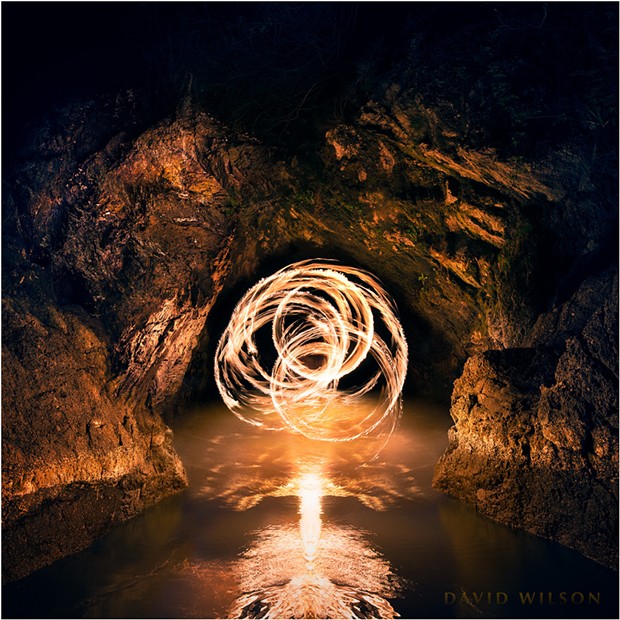 Photographing a fire dancer this week was a new experience for me, and I was unsure how things would turn out when Chelsea Burns, a local fire dancer, approached me about taking pictures of her as she danced with fire. It sounded like something interesting to photograph in the dark, so I was into it. My imagination began to conjure images, seeing shapes and designs and scenes that we could make.

We chose a beach location for its fire safety and potential for reflections. I was interested in capturing images inside a nearby cave, and there were other large rocks and rock faces with great textures that could be brought out by the fire’s illumination.

But as I photographed while dusk slipped to night, I began to realize that capturing my vision of the fire dancer was going to take more experimenting than I had thought. Usually the fastest things moving about in my images are stars or clouds sliding across the sky, and bright light sources are held to a minimum. In contrast, the fire dancer’s twirling fire was a veritable cyclone of whirling light in constant blinding motion. It took a few frames to get used to that, and to be sure I am still not its master after photographing for only about an hour.

Looking through the photographs at home I couldn’t find any that I felt excited about. I needed more time to get used to the way the moving fire landed in the image in order to really capture what I was envisioning, but I see how it will be possible in future sessions. While I could find no single exposure that I thought stood on its own merits, I did find a number of them that I could put together into a fantasy environment. So I did.

A lot of the images I share are single exposures, but some are made from multiple separate photographs. The image I’m sharing here is a representation of that evening of fire dancing and photography made from a number of images from the shoot. I took about forty-five photographs, some out in low water that produced bright reflections, others near enough to the rocks that the fire brought out their details of texture and form, and some I shot within the cave, where the spinning flames illuminated the walls and floor of the cavern.

This image comprises a dozen photographs I took in and around the Moonstone Beach cave on April 24 and then later put together to make this scene of the fire dancer spinning in the cave. From within myself, this image comes out to you through my imagination, for the scene here never existed as you see it, but only as I saw it in my mind’s eye ... though some people may recognize elements of the Moonstone Beach cave.