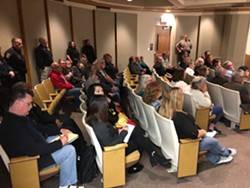 Judge John Feeney today decided against approving plans to have a man deemed by the courts to be a sexually violent predator placed under supervised release in Eureka, according to media reports and a Facebook post by Eureka Police Chief Steve Watson.

The proposed placement would have had Joshua Cooley staying in a rotating set of motels, moving every four days or so, under the supervision of Liberty Healthcare.

In his post, Watson thanked the judge for listening to community concerns and noted that more than 50 people attended the hearing.

“Judge Feeney also indicated in his decision that he felt Cooley’s case presented extraordinary circumstances supporting his placement in another county upon his release from the state hospital (where D.A. Fleming argued he should remain and I agree),” Watson wrote. “A status review has been set for May 24 and a placement review for July 19.”

Feeney has made similar findings two previous time. He blocked Cooley’s release to Garberville last month and before that found that a rural Freshwater neighborhood was not a suitable placement.

There was also community opposition in both of those cases.

Cooley was committed to the hospital on his Sexually Violent Predator (SVP) designation in 2010 after serving prison time for sexually assaulting a minor. After an appeal, his petition for release was granted in December of 2016, with the search for a suitable placement site taking place over the last 20 months.

Read more about the SVP designation process in the Journal’s Aug. 20, 2015, story “Free and Afraid.”


Happy Friday, everyone—I have some good news to share with you. During a court hearing this morning concerning Sexually Violent Predator (SVP) Joshua Cooley and his proposed release into Eureka on transient status, Judge Feeney listened to our concerns and reversed course.

The Judge ultimately agreed that releasing Cooley as transient to a series of rotating Eureka motels where he would be required to move every 4 days or so (while being managed by Liberty Healthcare under a conditional release program) was not a good plan or an appropriate placement for him.

Judge Feeney directed Liberty Healthcare to move forward with Cooley’s non-transient placement in a more permanent residence outside Humboldt County as he felt all options had been exhausted here over the past two years. (A suitable residence on a 10-acre property in Tehama County has been located by Liberty Healthcare and required noticing will re-commence for his possible placement there.)

Cooley’s attorney did tell the Court last minute that she was aware of another residence in Humboldt that might be available to Cooley soon, so unfortunately this possibility may still be explored also. However, the Court is moving forward with an out-of-county placement at this time.

Judge Feeney also indicated in his decision that he felt Cooley’s case presented extraordinary circumstances supporting his placement in another county upon his release from the state hospital (where D.A. Fleming argued he should remain and I agree). A status review has been set for May 24 and a placement review for July 19.

I want to thank all of those who attended the court hearing this morning including those spoke out against Cooley's placement in Eureka during the public comment period. I also want to thank those of you who wrote letters of concern to the Court/D.A.'s Office, and who helped spread the word. So, congratulations—while the saga isn’t over yet you got it done today!

On that note, I also want to say I appreciate Judge Feeney's willingness to listen to our concerns and change course (he invited members of the public to come to the podium and share their thoughts).