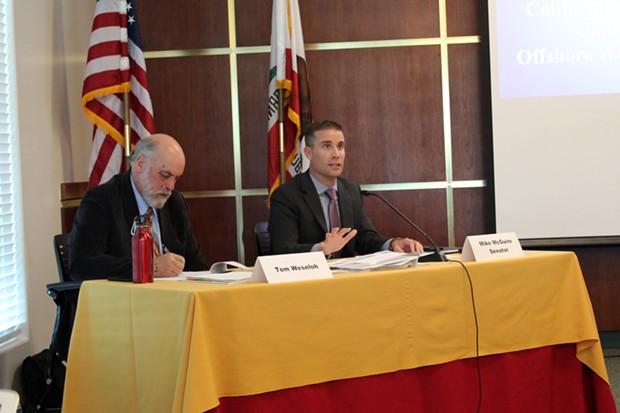 Exactly when the turbines are set to be constructed depends on the multiple environmental assessments by various state, local and federal agencies, as well as a federal bidding process. An approximated date of 2025 was given, but it is not set in stone because a number of factors can influence the timeline. One of the main concerns held by some of the community is that the partially submerged wind turbines structures will endanger coastal bird species and marine mammals.

“California needs to ensure this new green energy source does not harm our fisheries, wildlife and the local economy that depends on a thriving natural resource,” McGuire said while highlighting that the number one goal of the meeting was to hear from the community and start formulizing the regulatory process.

The turbines represent a fraction of the renewable energy sources outlined in goals by the state, which require California to have 100-percent zero-emission energy sources by 2045. According to the Bureau of Ocean Energy Management, the offshore wind energy has the potential to power 6.5 million homes in California and the industry could create thousands of jobs to help the regional economy.

Within the first panel, Necy Sumait — the chief of renewable energy in the Pacific region for BOEM, emphasized the importance of engaging with all stakeholders involved in the process.

“The potential demand for offshore energy on the Pacific coast has never been greater,” Sumait said and clarified that BOEM has been working with California agencies since 2016, with approval from former Gov. Jerry Brown, to identify areas that may be suitable for future development. There are four distinct stages to BOEM’s process of developing the renewable energy sources, which include planning and analysis, leasing, site assessment, and construction and operations. At this point, California is at the first stage, which means BOEM is working with other agencies to determine the feasibility of constructing offshore wind turbines within Humboldt Bay.

Even if the leasing areas are determined — which would be closer to the mid or late 2020s — Sumait said the actual construction may not occur right away because the lease does not guarantee or provide authorization to construct. Instead it gives the lease owner the ability to conduct more research for an engineering report.

Sumait noted several concerns from the fishing community, such as potential loss of fishing grounds, gear entanglement, mitigation measures used by the offshore wind industry and loss of income.

These potential risks are what Harrison Ibach, the president of the Humboldt Fisherman’s Marketing Association, wanted to focus on when he spoke in the fourth panel.

“We have some of the most sustainable fisheries in the world. Here, fishermen face many challenges as our fisheries are some of the most highly regulated, with gear restrictions and limited fishing seasons,” Ibach said, adding that the state has already closed large areas of fishing grounds to protect environmental habitats.

“These offshore wind energy projects will permanently take away an additional hundreds of square miles of ocean from fishermen, as we are unable to fish within these vast areas," he said. "We as fishermen in this state utilize every last bit of these remaining areas. The bottom line is that we cannot afford to lose any more essential fishing grounds."

Both fishermen and environmental groups came to some agreement about how the turbines would affect ocean life and resources. The structure of the turbines were also questioned by panelists in the third group, who presented facts on how different avian and marine mammal species would be impacted.

Jennifer Savage, the California policy manager of the Surfrider Foundation, said it’s important to consider what ramifications may occur if the turbines were constructed in Humboldt Bay.

“Renewable energy is obviously the right thing — we still have to do the right things the right way,” Savage said. “While we support it in concept, we remain keenly aware that, as related to our waters, the technology is still largely unproven and untested."

Some of the major concerns from environmental groups consisted of turbines affecting bird migration patterns, electromagnetic fields, underwater noises and vibrations affecting orientation and navigational abilities of marine mammals and the turbine cables that float potentially leading to whale entanglements.

“Despite the admirable quantity of meetings that BOEM and the CEC have held, what we’re hearing from community members is the need for improved quality of meetings. Clearly opportunities exist for a more inclusive and transparent process that would ensure site selection, as well as reflect environmental and other concerns,” Savage said.