'In the Face of Evil:' EPD Honors Sharral McDonald with Service Award On the first anniversary of her death, the Eureka Police Department honored Sharral “Sherry” McDonald this morning for putting herself between a friend and the armed felon trying to kidnap her.

“Detectives assigned to the investigation noted that Sharral could have easily fled to safety at any time but, instead, became a shield to protect her friend from harm,” EPD Chief Steve Watson read from a letter to McDonald’s family. “The officers and staff at the Eureka Police Department can think of no finer example of an act of courage in the face of evil or of a citizen who is more deserving of the Valor Service Award.”

According to EPD, Ronald Allen Crossland, a 52 year old with a long rap sheet and who’d been released from jail just a few weeks earlier, showed up at the H Street home of McDonald’s friend, Jane Doe, his on-again, off-again girlfriend, on May 6, 2018. McDonald and Doe arrived at the residence to find Crossland sitting on the front porch. He followed Doe into the residence and cornered her, brandishing a small-caliber handgun, and threatened to shoot everyone if she did not leave with him. 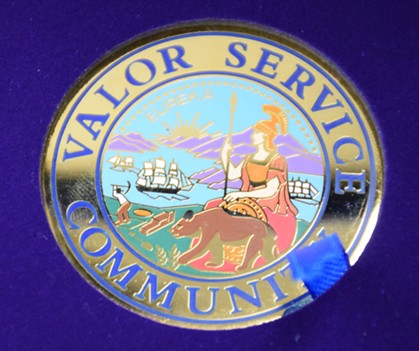 “Upon witnessing the threats to (Doe’s) life, Sharral immediately and without hesitation walked over to the male, placing herself between him and (Doe),” the letter to the McDonald family reads, adding that Sharral then told Crossland, “You’re being violent and you need to leave.”

Crossland then shot McDonald once in the head and Doe fled to safety. Crossland — who has a history of domestic violence allegations, including several alleged instances with Doe — later committed suicide in a Fortuna trailer park as police closed in.

Eureka Police detective Richard Bise said McDonald — who had no known crisis intervention training or safety gear, and was unarmed — essentially told Crossland that if he wanted to get to Jane Doe, he had to come through her first.

“I would like to think I would have that courage,” Bise said.

Watson said the service award has only been given out six times in the five years.

“It’s not an award we give out lightly,” he said.

As Watson spoke, a slideshow with pictures of McDonald was projected onto a screen behind him with images of her holding grandkids, playing softball, decorating Christmas trees and at events large and small throughout her life. At the conclusion of the ceremony, Watson presented the award to McDonald’s children Shelsey McDonald, Shaun Bagley and Shayla Verbich, and her husband, Philip McDonald, on her behalf.

Shayla Verbich said her mom — remembered as a caretaker by those who knew her, someone who never hesitated to help the people around her — was an amazing woman.

“She is so dearly missed in every day of our lives,” she said.