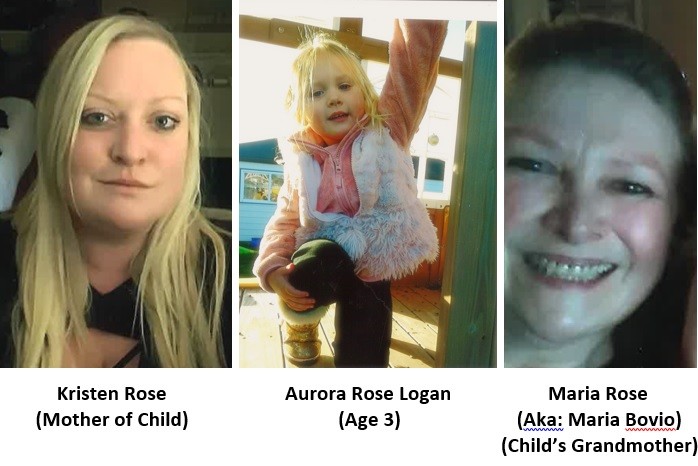 The Fortuna Police Department is asking for the public’s help in locating a 3-year-old girl believed to be with her mother and grandmother.

According to a press release, the father of Aurora Rose Logan last saw his daughter on April 26 and the girl’s mother, Kristen Rose, and grandmother, Maria Rose, cleared out the Fortuna house where they had been living and have turned off their cellphones in what police say appears to be an attempt “to conceal the child’s whereabouts.”

“They reportedly have connections to the areas of Potter Valley, Southern California, Las Vegas, Nevada, Texas and Maine,” the release states. “Their whereabouts are currently unknown."

The girl’s information has been entered into the national missing person’s database, according to the Fortuna Police Department.

Read the full release from the Fortuna Police Department below:

On May 2, 2019 the Father of Aurora Rose Logan (age 3) contacted the Fortuna Police Department and reported his child was the victim of a parental abduction committed by the child’s Mother, Kristen Rose.

Fortuna Police Department Detectives are investigating this matter and have found the following. The child, Aurora Rose Logan (age 3) had been residing with the mother and father at their residence in the 300 block of S. 15th Street in Fortuna. Kristen’s mother, Maria Rose had also been staying with them. About three months ago the parents separated and the Father moved out of the residence. The Father last had contact with his child, Aurora on April 26, 2019 in Eureka. Since that time the Father has been unable to reach Kristen, Maria or his child, Aurora.

It was found that the residence in the 300 block of S. 15th Street in Fortuna has been cleaned out and vacated. Kristen and Maria’s cellular phones have been disconnected and Detectives learned that Kristen has been selling items and planning on leaving the area for the past couple of months. Kristen reportedly did not tell the Father that she was planning on leaving with their child. Their whereabouts are currently unknown and it appears she is attempting to conceal the child’s whereabouts.

They are believed to be driving an orange colored 2006 Honda Element displaying California license plate 7DWT977.

They reportedly have connections to the areas of Potter Valley, Southern California, Las Vegas Nevada, Texas and Maine. Their whereabouts are currently unknown.

Thank you for your assistance.