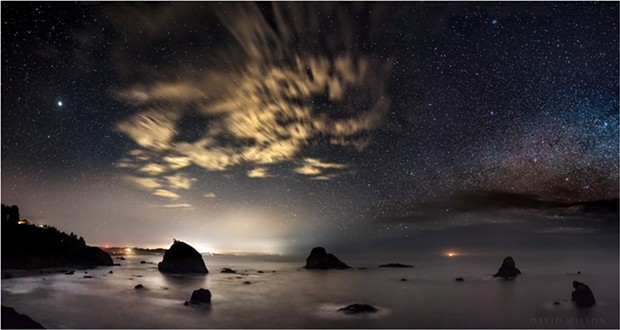 Considering how the world is versus our perception of it is interesting. Take this photograph. What do you see in it? Perhaps give yourself a moment and label all the things you find in it. You could describe the image with all of the thousand words a picture is due, but yet miss entirely some of the action that was taking place during the photograph, either because it wasn’t recorded at all or it was recorded in such a way that it isn’t recognizable. Did you note the crashing waves pounding the rocks below, or describe the cottony-puffy shape of the clouds as they drifted across the sky? What about the motion of the Earth beneath the stars, or the perpetual crumbling of the coastline into the waves occurring before our very eyes? It’s all there, but did you see it?

What’s real time? Let’s say real time is how we perceive time passing via our personal biological senses of sight, sound, smell, etc. Our eyes are made to bring us a view of our surroundings in an instant, with moment-by-moment updates. When I shot this image, I was out photographing with my friend and former student Jake Langston. In real time we saw each of the individual waves arriving in a continuous procession. One by one they rolled in to the shore, crashing and splashing around the gigantic buffer rocks in the shallows before finally pounding against the cliffs and beaches amid the familiar roar of the surf’s white noise. Above us a cluster of small clouds slid slowly across the sky, each a discrete little puff. Stars twinkled behind them, hanging apparently motionless across the magnificent night. 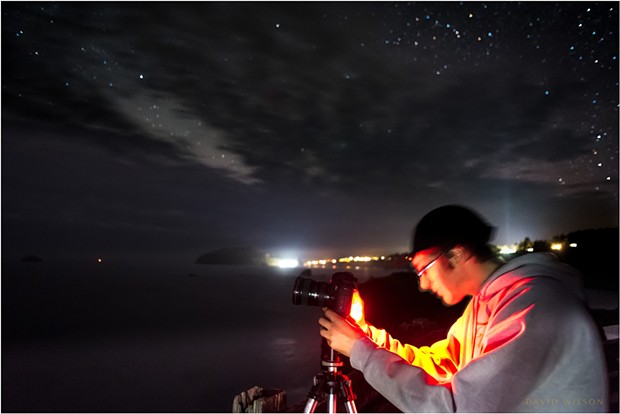 Using a long exposure, the camera’s perception of the evening was a little different. When a photograph is made using a long exposure, movement in the frame will be recorded differently from the way we see it with our naked eyes. The motion of moving things is evened out over time in the image, smoothing them out over the duration of the exposure. For this image, the shutter was open for 25 seconds. While Jake’s and my eyes perceived individual waves marching past, the camera’s sensor gathered the scene over the course of nearly half a minute and saw things differently. The appearance of every wave that passed by during that time was averaged out in the image, giving the Pacific’s surface a falsely soft look — differing from the way we saw it, and certainly not what you’d experience were you down there in a kayak. The cloud puffs we discerned overhead became shapeless streaks in the sky to the camera’s eye. The image isn’t how we saw it in real time, but it is what the night looked like when 25 seconds of motion was averaged into a single view.

Other motion around us made much more gradual changes to the view, and neither our eyes nor the camera’s half-minute stare could capture the movement: The stars wheeled slowly overhead due to the Earth’s rotation but to both our eyes and to the camera’s patient sensor their movement was frozen and they appeared as points in the sky. But even the slow motion of the stars across the heavens is speedy next to the geologic processes shaping the landscape in front of us, as the grind of constant erosion pushed the coastline back over time, and tectonic plates shifted below. One would need a long shutter speed, indeed, to capture that motion.

Moments to us are recorded in fractions of a second by our eyes, and to the camera they may be measured in periods of minutes or hours, but neither our eyes nor the camera could perceive the larger, slower motion of the geologic changes taking place around us. All the years and changes we experience in a full, rich life are to the Earth but flickers of motion in a single brief moment, snapshots in the history of the world.