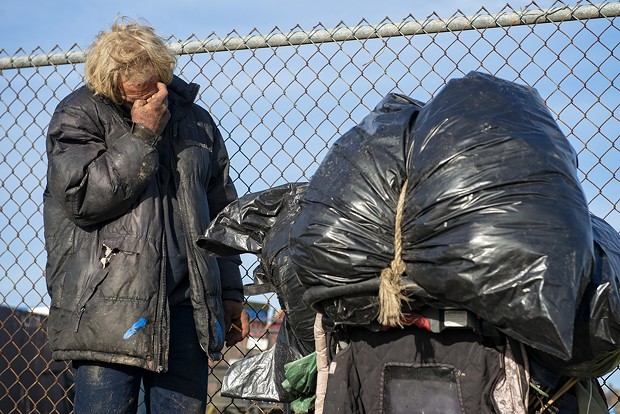 The meeting — scheduled from 2:30 to 4:30 p.m. at Christ Episcopal Church at 625 15th St. in Eureka — is intended to bridge the “empathy gap” organizers feel exists in conversations about finding shelter for those currently living without. To that end, the meeting will feature “testimonials” from people who have benefitted from transitional housing.

There’s an acute need for additional shelter and transitional housing in Humboldt County, where nearly 1,500 people were living homeless and without shelter earlier this year, according to the biennial point in time count directed by the Humboldt Housing and Homeless Coalition. That puts Humboldt County’s per-capita rate of homelessness at nearly three times the state average.

Scott Nelson, an organizer with True North, said those neighborhood concerns are why True North wanted to make sure community members hear from those who have been in need of transitional housing about just what it meant to them.

“We are only going to build a stronger, healthier, happier community if we’re all lifting together,” he said.

Childcare will be provided during tomorrow’s event, which builds on nine months of research True North has done on transitional housing needs and barriers locally.

Nelson and others at True North stressed in an interview with the Journal that tomorrow’s meeting is aimed at starting a conversation locally that leads to action.

See the full press release from True North copied below:

EUREKA, CA, May 9, 2019 — True North Organizing Network is hosting a Town Hall, “The Changing Face of Transitional Housing: Moving Toward Solutions.” The event will be held Saturday, May 18th from 2:30 PM - 4:30 PM at Christ Episcopal Church, 625 15th Street, Eureka, CA 95501. Childcare will be provided and we encourage community members to continue the conversation at the conclusion of our meeting. The two-hour program will include testimony from both those who have worked hard to make transitional housing possible and those who can and have benefited from their help.

True North Board Member and leader Pastor Kathryn Dunning of Eureka First United Methodist Church said that she, “looks forward to more people hearing the stories of how various forms of transitional housing are beneficial to vulnerable persons and to the well-being of our whole community.” True North Eureka Local Organizing Committee leader Dr. Ashley London Bacchi says that after the group’s nine months of research, it has become clear that these testimonies are necessary.

“Many have negative perceptions of what transitional housing is and don’t understand why it is needed to create a strong and healthy community for everyone.” Dr. London Bacchi says the program is designed to, “address and dispel common stigmas.” True North Eureka LOC leader Catherine Peacock says she looks forward the chance to “explore different options for transitional housing.”

Successes mentioned will include an overview of the programs provided by the North Coast Veterans’ Resource Center (NVRC), along with testimony from a participating veteran. We will also hear testimony from community members speaking to the success and positive impact of Betty Kwan Chinn’s Container Village. Chinn herself will speak to how a transitional housing component would complete her model.

True North leaders are committed to long-term work on transitional housing and to finding solutions to housing issues in our region. We invite the community to join us in our efforts, and will outline some opportunities to do so at the end of the event. Says Dr. London Bacchi, “we hope that people will come with an open mind, curiosity, and hope for a more just and sustainable future for Eureka!”

###
About True North
True North Organizing Network is a faith and values-based nonprofit organization made up of people working to make our community a better place for everyone. We are carving out space in the political process for those who have historically not been heard or included. We believe human dignity is the heart of justice and progress, and that for a true and honest democracy to thrive, every person needs the opportunity to be heard and respected. We are on the ground having dozens of conversations a week with people across the region whose stories are not often told. If you've got a story with a side you're not hearing from, give us a call.