Ponchos, umbrellas and rain jackets surrounded Humboldt State University’s Redwood Bowl this morning as graduates celebrated their commencement. Among them, in a full cap, gown and graduation stole, was Charmaine Lawson, sitting in place of her son, David Josiah Lawson.

David Josiah Lawson, who was a 19-year-old sophomore when he was fatally stabbed at an off-campus party two years ago in the early morning hours of April 15, 2017, would have spent this weekend celebrating his graduation from HSU. Instead, his mother accepted an honorary posthumous degree on his behalf.

After all graduates in the criminology and justice studies major were named, professor Michihiro Clark Sugata announced the presentation of the posthumous degree.

“The degree will be accepted by his mother, Charmaine Lawson,” Clark Sugata told the crowd. Cheering, applause and a standing ovation followed, as Lawson continued her walk onto the stage. “David. Josiah. Lawson,” the professor continued. Raising both her hands and the HSU diploma, Lawson stayed on stage to celebrate her son’s degree.

Lawson went back to her seat and stood as the crowd continued to cheer.

Two years ago at David Josiah Lawson’s funeral service in Moreno Valley, California, HSU Vice President Craig Wruck spoke and presented a Certificate of Achievement to Lawson’s family. Charmaine Lawson respectfully declined the gesture, telling him, “We’re going to do this the right way. Hold on to it until his graduation date, where we’re going to go and accept it at the Redwood Bowl as he would have on his graduation date.” 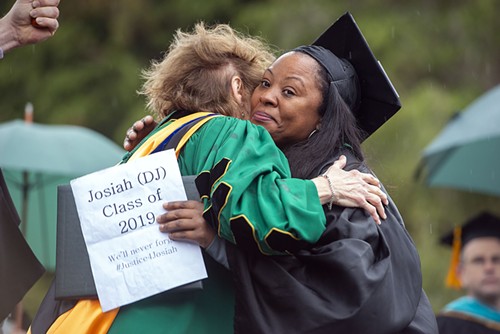 David Josiah Lawson was also celebrated at yesterday’s Black Heritage Graduation Celebration, where Lorna Bryant introduced him and his accomplishments.

“Now, I’ve painted a picture but I want you to hear his voice,” she said before playing a recording of Lawson’s “To Be a Man” speech.

“Josiah talked about being a man in the face of adversity. ... The thing with adversity, It makes you stronger, it gives you just what Josiah talked about: integrity and being a person of your word,” Bryant said. “Josiah planned to be a district attorney, and changing the laws that harm our community, harm our people and harm our lives. It was his intention to make a change. That won’t be stopped by the day of April 15, 2017. I say that because he has a strong family, particularly a strong mother.” 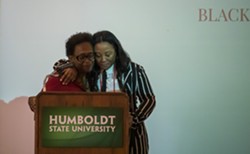 At the Black Heritage Graduation Celebration graduates were given two roses to dedicate to their families or whomever. A presentation of each of the graduates was displayed on a screen behind the stage showing their name, pictures, major and a quote. When it was David Josiah Lawson’s turn to accept his roses, Charmaine Lawson, wearing a graduation cap, and her family walked onto the stage to accept on his behalf. Charmaine Lawson took the roses and said her son would have dedicated the first one to his family, his brother and sister, his LA family and his Humboldt family. She grabbed the second one and said, “He would have said, ‘This rose goes to my MVP, my mom Charmaine, that would be sitting over there [pointing to the seats] rather than standing right here today. My MVP, my mom, my dad who raised three outstanding children.’” She congratulated the rest of the class and walked off the stage. 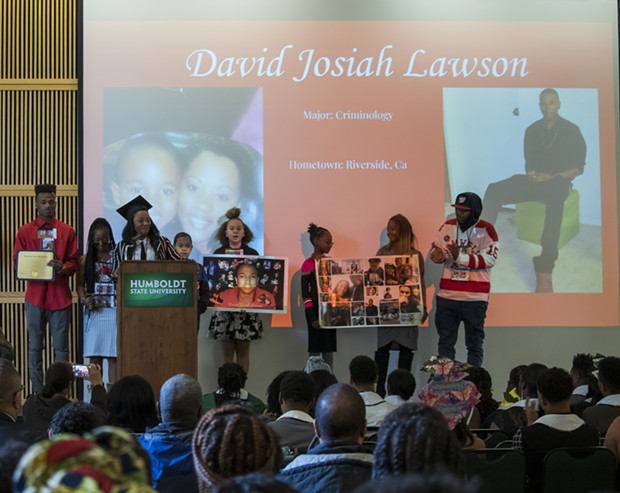 Just before today’s ceremony at the Redwood Bowl, Charmaine Lawson posted a video on Facebook live, “This is a really sad and really emotional day, I’m here at Humboldt State University standing in for my son, DJ, David Josiah Lawson, that was taken from us, but DJ, even though you were taken, your mommy is still here, the community is still here, your professors are here,” she told the camera. “Mommy’s walking for you today and our family is waiting out there to see me walk out for you, Today is your day DJ and I’m going to make sure it’s special. This is for you DJ. I love you my baby.” 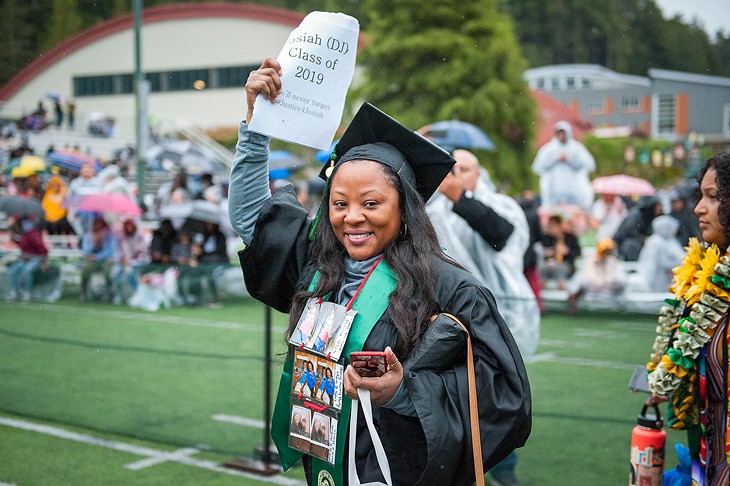 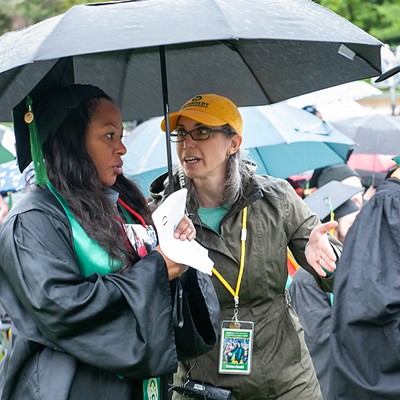 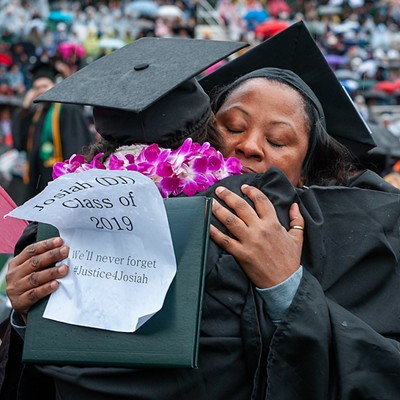 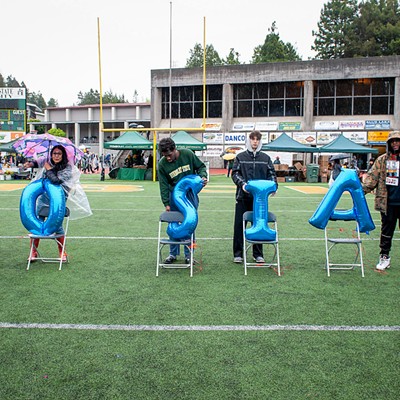 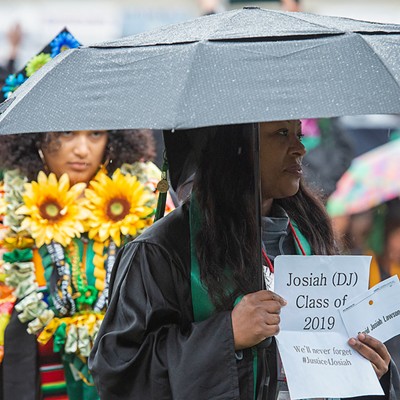 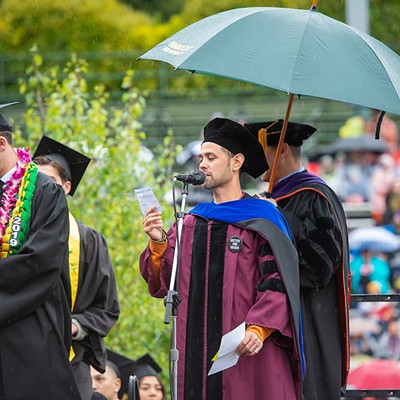 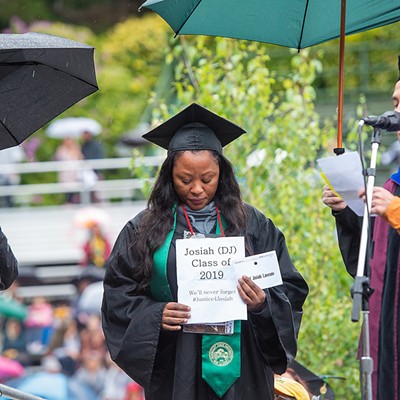 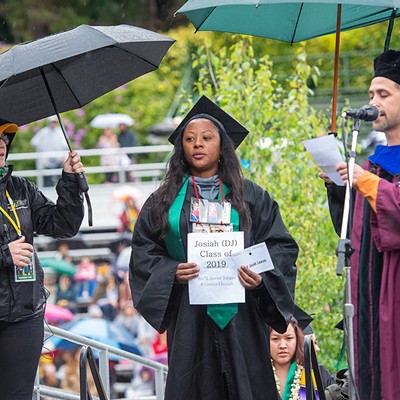 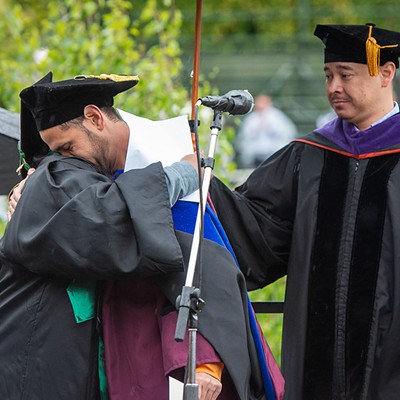 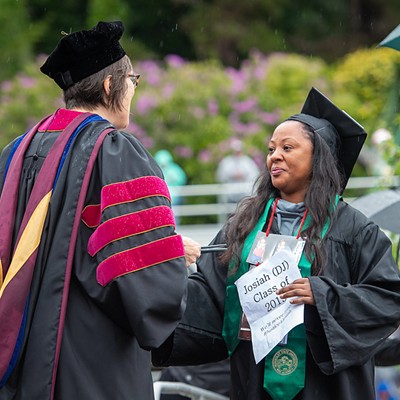