The Eureka City Council voted unanimously Tuesday to delay selecting a marketing services provider after questions were raised about the fairness of the process, with several council members pointedly voicing frustration at the lack of information provided to them, despite their requests.

So after several hours of discussion and public comment, the council opted to conduct another round of interviews with a new five-member panel to be selected by Mayor Susan Seaman. The item is scheduled to come back to the council June 18.

At issue is a $370,000 annual contract to promote Eureka as a destination for visitors from near and far after the city decided earlier this year to end its decades-long association with the Eureka-Humboldt Visitors Bureau, primarily over a dissatisfaction with the bureau’s focus on selling the region’s redwoods as a tourism pull despite Eureka’s overwhelming role in bankrolling the countywide marketing effort.

After requesting proposals, two contenders made the final round for consideration — Humboldt Made, which currently runs a visitors’ center out of the Clarke Museum and spearheaded the Friday Night Market in Old Town, and the award-winning and highly regarded Virginia firm Eddy Alexander.

But, days before the staff recommended the council move forward with Humboldt Made in a narrow decision, Lost Coast Outpost published a series of text messages between the nonprofit’s Executive Director Alanna Powell and Rob Holmlund, the city’s direct of community development, that show she knew about staff plans to put marketing services out to bid before the issue went before the council and, in her role as the head of the visitor's center, had been asked to provide input on the request for proposals as it was being crafted by staff.

The disclosure led council members and members of the public to raise concerns about the selection process, which included a written proposal and two interviews with a 10-member panel.

Before the presentation at Tuesday’s meeting, Holmlund — who sat on the panel — noted that he scored Eddy Alexander higher in both the proposal and interview categories and that while he had “a lot of conversations with a lot of people” as the city was considering how to move forward with marketing, his discussions with Powell “changed” after he knew Humboldt Made was going to apply. He also said it was appropriate for him to get her input prior to that point, given Humboldt Made's role operating the Visitor's Center.

On Tuesday, Holmlund sung the praises of both proposals, saying they were somewhat apples and oranges, noting that Eddy Alexander is a nationally acclaimed firm with a proven track record but little connection to Humboldt, while Humboldt made has a strong local track record and ties to the community but little experience in national marketing efforts.

Many of the public speakers at Tuesday’s meeting spoke highly of Humboldt Made, praising the work of Powell and her staff, with some even pointing to Holmlund’s scoring as proof the process was not bias, and urging the council move forward with awarding the marketing contract.

But others asked the council to “put a pause on things,” as one speaker put it, and move forward with another round of interviews for a number of reasons, including the lack of a diverse voices of the business community on the selection panel and the need to concentrate on cleaning up Eureka before any marketing effort took place.

When the discussion moved back to the council, a lack of transparency was repeatedly brought up, with Councilmember Austin Allison emphasizing that the proposals hadn’t been distributed to all of the council members despite the fact that the final decision and ultimate responsibility on how to move forwarded rested with them.

“We are making a decision on something that’s massive for the community when we don’t know all the facts,” he said, prefacing his comments with the acknowledgement that delaying the decision was “going to disappoint people but I’m not here on the council to make friends. I’m here to do what is best for the community.”

Allison also suggested that members of the public should have an opportunity to review the proposals, so that everyone would be playing on a level playing field when it came to a discussion on the best option for the city.

(When the Journal requested copies of the proposals, a large portion of Eddy Alexander’s submission was so heavily redacted at the firm’s request it was difficult to grasp the firm's plan for marketing Eureka. Read the proposal here, and Humboldt Made's here.) 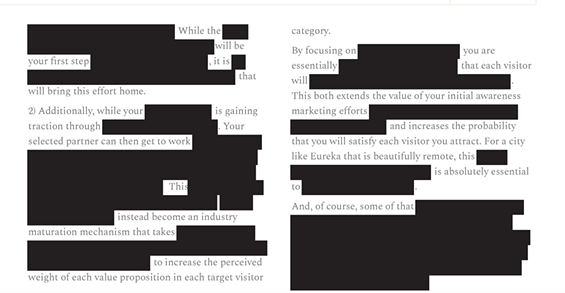 Councilmembers Leslie Castellano and Kim Bergel brought up issues with being able to have copies of the proposals sent to them and Councilmember Natalie Arroyo noted that details came to them in “fits and starts” and there was “lack of clarity on how we were going to get the information.”

“Both of the candidates sound awesome. It’s the process that is a problem in my mind,” Bergel said.

Holmlund asked the council to move cautiously in considering to publicly distribute proposals, noting that Eddy Alexander didn't want its document that “contains their secret sauce” to be “broadcast to the world,” even though any submission is the property of the city.

That apparently did not sit well with Bergel, who pushed backed quickly with her response:  “There’s a difference in broadcasting and providing materials to the council.”

The council then moved forward with the unanimous vote.

Editor's note: This story was updated from a previous version to correct an error regarding Powell's input to city staff as the request for proposals was being created.