Indian Island Likely to Return to Wiyot Tribe Next Month 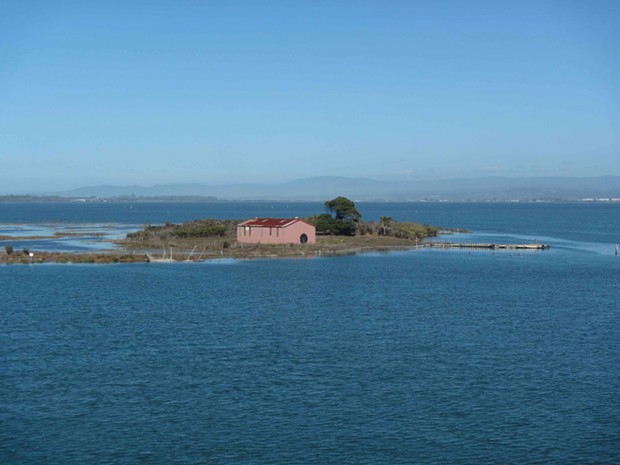 After an unexpected delay, the unprecedented repatriation of Indian Island to the Wiyot Tribe is poised to come before the Eureka City Council for final approval next month.

City Manager Greg Sparks said the return of the tribe’s sacred ancestral land — approved in principal by the council in principle Dec. 4 — was delayed due to an issue with the State Lands Commission, which is responsible for protecting natural and cultural resources, as well as public access rights on publicly owned land.

“We think we have resolved that,” Sparks said. “It seems like we’re just about there.”

Sparks said he is looking to get the matter back before the council next month, either on June 18 or at a special meeting.

The council voted unanimously Dec. 4 to declare more than 200 acres of city-owned land on the island “surplus property” and directed Sparks to negotiate its return to the Wiyot Tribe, for whom the island was home for at least 1,000 years, according to an archaeologist, and since time immemorial, according to the tribe. In Wiyot culture, the island — which is home to the sacred village Tuluwat, where the tribe held its annual World Renewal Ceremony — is the physical and cultural center of the universe.

The largest of three islands in Humboldt Bay, Indian Island is comprised mainly of tidelands and spans about 280 acres, stretching nearly a mile long and a half-mile wide. In late February of 1860, the island was the site of one of a series of coordinated attacks by white settlers on the Wiyot people, when militiamen invaded the island while the Wiyot men were away from the village gathering supplies and brutally massacred more than 60 unarmed women, children and elders.

The massacre came just weeks after Robert Gunther purchased the island from John T. Moore, who had legally seized the land from the tribe by submitting a claim with the federal government. The island then endured more than a century of environmental abuse. It was diked and drained to create grazing land, then became home to a number of lumber mills and a dry-dock boat repair shop, all of which left toxic legacies. 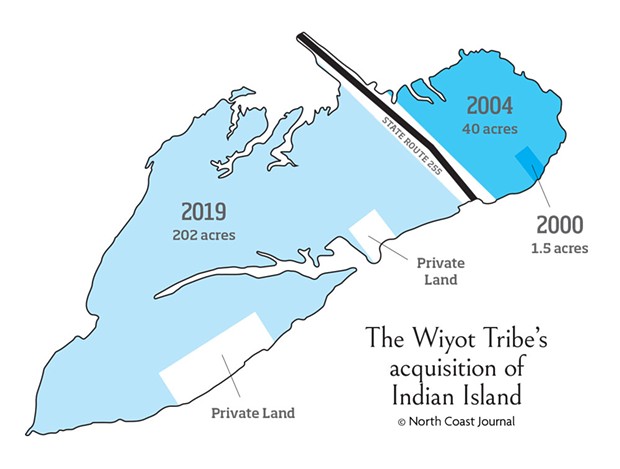 In 2000, after years of fundraising efforts, the Wiyot Tribe purchased a 1.5-acre parcel on the island that included Tuluwat from the city of Eureka for $106,000. Several years later, the city donated an additional 40 acres to the tribe, which secured a variety of grants to clean up the contamination left by the lumber mills and boat yard, and in 2014 tribal members gathered on Tuluwat to finish the World Renewal Ceremony that had been interrupted by the massacre.

The council’s decision in December to return the other 200 or so acres of city-owned land on the island free of charge is considered unprecedented, according to experts consulted by the Journal, all of whom said that while there are examples of the federal government, nonprofits and private landowners returning native land, they believed Eureka is the first local municipality to take such a step.

“I think it’s a big deal,” Bob Anderson, director of the Native American Law Center at the University of Washington School of Law who for six years served under Interior Secretary Bruce Babbit, providing legal advice on issues of Indian law and sovereignty, told the Journal in December. “It sets an important precedent for other communities that might be thinking about doing this. They can say, ‘Yes, it’s been done before in California.’ … This is a significant example of sort of forward-looking, modern good relationships between tribal government and non-tribal government. It seems this could be a shining example of what’s possible. It’s very important to Indian Country.”

Wiyot Tribal Chair Ted Hernandez was not immediately available to comment for this story but we'll update the post if we hear back from him.