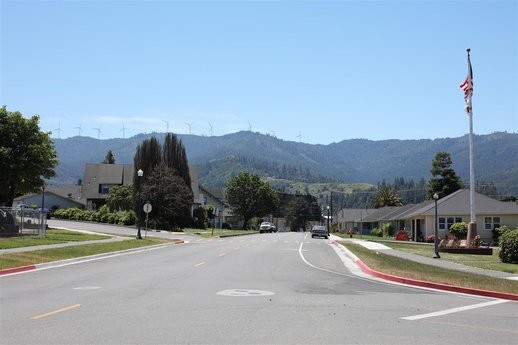 With the deadline to comment on the draft environmental impact report fast approaching, debate over a proposed wind farm on a ridgeline to the south of the Eel River Valley is heating up.

The project, developed by Terra-Gen, a large, San Diego-based renewable energy company owned by the private equity firm Energy Capital Partners, would see up to 60 large wind turbines built atop Monument Ridge and Bear River Ridge. Once operational, the farm would contribute an estimated 155 megawatts of renewable energy annually, enough to continuously power 40,000 homes, according to the company. The project is slated to come before the Humboldt County Planning Commission — the governing body with authority over the project permits unless its decision is appealed to the Humboldt County Board of Supervisors — in July. The deadline to comment on the project’s draft EIR is June 5.

Project proponents point to global climate change, stressing the urgency of transitioning local and national energy grids away from fossil fuels toward renewable energy sources, stressing that time is running out to reverse course. And while they concede the project comes with environmental impacts, they argue that those have to be weighed against the carbon footprint of doing nothing and carrying on with an energy grid largely tied to natural gas. To some extent casting critics as NIMBYs who want other communities or regions to suffer the impacts of their energy consumption, proponents argue that it’s only fair that Humboldt County shoulder the impacts of its energy usage.

“What is the environmental impact of more of the same?” Natalynn DeLapp, a project consultant, said on KMUD’s Monday Morning Magazine, adding that one of the impacts outlined in the draft EIR is the visual impact of placing as many as five dozen 600-foot-tall turbines dotting the ridgelines. Some might view that as a blight on the landscape, but DeLapp said she chooses to look at it differently.

“Personally, I look at them and see innovation and our human capacity to evolve and look for new solutions to our ongoing energy needs,” she said.

The project is also slated to create some 300 jobs during construction, as well as 15 permanent ones, and generate an estimated $2 million annually in local tax revenue once operational.

But critics of the project — including some in the environmental community, the Bear River Rancheria and the Wiyot Tribe — believe there has to be a better way. They stress the scope of environmental impacts associated with construction of the wind farm and its continued operations.

Adam Canter, tribal biologist for the Wiyot Tribe, said Bear River Ridge is a special place to the Wiyot, considered a “prayer spot,” from which one can see almost all of the tribe’s ancestral territory. He noted that the proposed site is a “giant coastal prairie” with high coverage of native grasses and plants that would be forever impacted by the project.

Additionally, Canter said the tribe worries about impacts to wildlife and migratory bird species, most acutely the California condor, which is planned to be reintroduced to the North Coast in 2020.

“It is probably the tribe’s most sacred bird and part of the Wiyot creation story,” Canter said.

The tribe believes in the urgency for renewable energy, Canter said, adding that most residences on the Table Bluff reservation have solar panels, but believes the proposed project “is going to be pretty catastrophic.”

Ken Miller, describing himself as a concerned citizen, appeared with DeLapp on the KMUD show and stressed that while many of the farm’s environmental impacts will be plain to see — 17 miles of newly paved access roads, a 25-mile clear-cut transmission corridor and thousands of trips by 90-foot trucks — he said others will be hidden. He charged that in all of its estimates of carbon-reduction, Terra-Gen has failed to factor in the carbon costs of construction and materials, which include tens of thousands of yards of concrete, more than 2 million pounds of carbon fiber for the turbine blades and some 24,000 gallons of oil annually to operate the turbines.

Canter and Miller both referred to the project as “green washing,” with Miller noting Terra-Gen is owned by Energy Capital Partners, a private equity firm with some $19 billion in energy sector holdings and just Monday announced the acquisition of all of Canadian Utilities fossil fuel-based electricity generation assets, which were valued at $621 million.

Having crunched the numbers, Canter points out that based on Terra-Gen’s own carbon displacement estimates, the proposed local project would reduce carbon emissions by 372,000 metric tons a year.

“You would have to build 162 wind projects of this capacity to reduce the national footprint by just 1 percent,” he said.

The problem with rejecting this project, DeLapp said, is there currently isn’t a better proposal on the table. Nearly a decade ago, she said she opposed a similar proposal from Shell Wind Energy and heard a bunch of concerns similar to those being voiced now. But times have changed, DeLapp said, and there’s more urgency than ever to move away from fossil fuels.

“Here we are 10 years later and Humboldt County is still no closer to having a decentralized energy system … and we are not meeting our energy goals,” she said in the KMUD interview.

Terra-Gen will be hosting a community meeting on the project this evening, beginning at 5:30 p.m. at the Old Steeple, 246 Berding St. in Ferndale, with another planned for 6:30 p.m. on June 3 at the Winema Theater, 125 Main St. in Scotia. Click here to read more about the project — including the 800-page draft EIR. Comments on the EIR can be sent to: Humboldt Wind Project Planner, County of Humboldt, Planning and Building Department, 3015 H St., Eureka, CA 95501 or emailed to CEQAResponses@co.humboldt.ca.us.