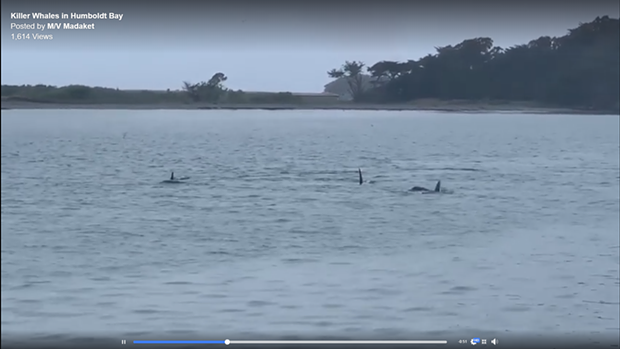 UPDATE:
Biologist Mike Kelly, who writes the column “Washed Up” for the North Coast Journal, reported via Twitter that he also caught sight of one of the orcas but apparently missed seeing the pod catch a sea lion.

“The remaining sea lions did seem nervous,” he says, showing a picture of several huddled on a buoy at the bay entrance.

All in all, it seems it was a busy day for marine mammals around the jetty.

Kelly also reports seeing harbor porpoises, a gray whale and some other sea lions that hadn’t gotten the memo on the orcas, which appeared in Humboldt Bay just one day before the beginning of Orca Month.

Other marine mammals around the Humboldt Bay jetties after the orca action included a couple of harbor porpoises, a gray whale and these California sea lions that didn't seem clued in about the orcas... pic.twitter.com/HH6smYxwMP

PREVIOUS:
A rare treat greeted some lucky folks this morning, when seven orcas were spotted by the captain of the Madaket.

According to a Facebook post, the whales were seen over by the county boat ramp on the North Spit by Capt. Cody Hills, who was aboard the survey boat Eagle.