During a tense May 21 Eureka City Council meeting, council members lamented that what they deemed a flawed process used to select finalists for a $370,000 annual marketing contract had broken the public’s trust.

Things have since gone from bad to worse amid new revelations, including that staff has repeatedly and materially misrepresented key facts about how the process played out.

The Journal has learned the council will meet in closed session to discuss one case of “significant exposure to litigation” stemming from the process that led to city staff recommending the council award the marketing contract to Humboldt Made, which already runs the Eureka Visitors Center, over a nationally acclaimed Virginia firm, Eddy Alexander. On May 21, the council opted to hold off on awarding the contract and to instead conduct another round of interviews with the two finalists, this time with marketing experts and a couple council members on the interview panel.

But the Journal has found that staff repeatedly provided inaccurate information to the public — and the council at the May 21 meeting — about problems with Humboldt Made’s initial proposal submittal and that of another firm that didn’t make the final cut. The problems were in fact so substantial that City Manager Greg Sparks says that, knowing what he knows now, Humboldt Made’s proposal should have been rejected and not considered, quickly adding that he doesn’t want to get out in front of City Attorney Bob Black, who is expected to brief the council on the findings an internal review of the matter and the legal ramifications on Tuesday.

At the heart of the matter is the question of whether Humboldt Made submitted its proposal complete and on time and, if not, whether that “irregularity” is something that should be considered non-material — the kind of thing that can be waived while maintaining a fair process — or substantive enough that it gave Humboldt Made a competitive advantage.


The city’s request for proposals asked interested firms to submit both a digital copy and 10 paper copies of their proposal by the close of business April 5 and warned “any proposals received by the city after the hour and date shall be rejected and returned unopened.” The RFP document also includes a disclaimer that the city “further reserves the right at any time and for any reason to … alter this RFP if the conditions so dictate.”

The first hint that anything unusual might have occurred with Humboldt Made’s proposal came in a May 14 story by the Lost Coast Outpost, which reported on a string of text messages between Eureka Community Development Services Director Rob Holmlund and Humboldt Made Executive Director Alanna Powell that the website had obtained through a California Public Records Request. (The texts actually came as a part of three requests submitted to the city by two anonymous email addresses that requested a host of documents, including the texts associated with Powell and Holmlund. It’s unclear how the website learned of the requests.)

As first reported by the Outpost, on Sunday, April 7 — two days after the city’s deadline for marketing proposals — Powell texted Holmlund to say that the firm's “final version of the proposal was unfortunately not the copy that was sent to the printer.” It seems that due to a staff error, the firm had inadvertently printed a rough draft and submitted it to the city. Holmlund asks if Humboldt Made submitted the correct digital version and Powell told him she was having a staff member check. The exchange is brief but Holmlund does not indicate the submittal error might be disqualifying.

When asked about this exchange by the Outpost, Holmlund, Sparks and Powell all reportedly said Humboldt Made had submitted the correct draft electronically by deadline so they deemed the application complete despite the error and the city allowed Humboldt Made to resubmit paper copies on Monday, April 8.

Councilmember Kim Bergel questioned Holmlund about this during the May 21 meeting.

“When the proposals were submitted, I was working on a Sunday on the zoning code and got a text from the director of the visitor’s center,” Holmlund said. “It said one of my staff submitted the wrong copy of the proposal. I asked (Development Services Deputy Director Lane Millar) to look into it and there was a duplicate page so said just resubmit. And so I think Lane talked to the city manager as well. So they resubmitted, and so did another firm … .” 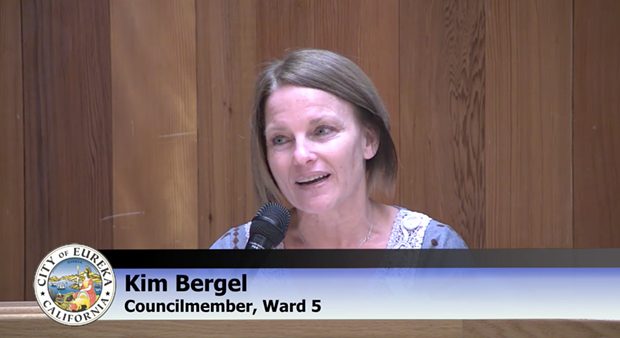 Bergel then asked if it was just the duplicate page that changed between the two print submittals or if any of the other content changed. Holmlund then deferred to Millar, saying he “handled this process” and was thus better suited to answering the question.

“It was simply replacing the page with what should have been there,” Millar said.

“There were no changes in any of the details … as far as changing words or anything like that?” Bergel asked.

“The page in question did have content,” Millar answered, again implying that the only issue was the duplicate page, which took the place of a page that should have been there.

In an interview with the Journal days after the council meeting, Holmlund repeated this characterization, saying that he never saw the original version but Millar told him the issue was limited to the duplicate page and that Humboldt Made had submitted its correct digital proposal by the April 5 deadline. Holmlund said the other firm referenced during the council meeting — which the Journal has since learned was Vessel Strategy, a New York firm — didn’t have an error but just missed the deadline entirely.

Holmlund stressed in the interview that he felt the most important thing was getting the best possible proposals to make sure the city’s $370,000 in annual marketing money was well spent. He also pointed to the city’s procurement policy, which allows the city’s “purchasing agent, at his or her sole discretion,” to “wave inconsequential irregularities in bids received.”

Around the same time, Sparks told the Journal essentially the same thing, saying it was his understanding that the issue with Humboldt Made’s proposal was limited to the single page and that the correct electronic version had been submitted on time. He said he deemed it to be a “minor correction” and also stressed that he felt it important to bring the best possible proposals to council.

On May 25, the Journal reached out to City Attorney Bob Black to get his impression of the seemingly contradictory clauses in the RFP and the city procurement policy and whether he deemed this all to be inconsequential.

“I haven’t been asked this question and I would need to take a look at the specific language in the RFP,” Black said. He provided the Journal an update later in the day, saying “this question requires digging deeper” and he would be in touch.

On Friday, Black told the Journal there are a number of issues at play. First, he said, the city’s procurement policy does allow for the “purchasing agent” to issue waivers in limited circumstances. However, in this case, because the city is considering a contract of more than $100,000, it’s the city council, not staff, that is the official purchasing agent, meaning the council would have to formally issue the waiver for Humboldt Made. But that’s fixable, Black said. If the council decides Humboldt Made is the best fit for the city, Black said there’s nothing to prevent it from simply voting to approve the waiver before voting to enter into a contract.

But there are potentially more substantial issues with Humboldt Made’s submittal.

“It was more extensive than just replacing a duplicate page,” Sparks said. “As I read through them, it really looked like the Friday copy was a draft that had, I wouldn’t necessarily say typos, but the copy submitted on Monday had been cleaned up. For example, the abbreviation ‘HM’ had been changed to ‘Humboldt Made’ and a few paragraphs had undergone a little bit more significant rewrites.”

Sparks said none of the prices, numbers or main points of the proposal changed but it appeared the draft submitted Monday had gone through an editing process and “was just kind of better.”

And this mostly aligns with what Powell texted Holmlund on April 7. (Attempts to reach Holmlund to comment on the most recent developments in this story were unsuccessful.)

Reached Friday, Powell said the print copies her staff submitted April 5 were from a rough draft from a couple of weeks earlier. The final draft — which everyone involved had signed off on — was completed by the April 5 deadline, she said, and was a superior draft.

Powell said she never represented to anyone in city staff that the issue was limited to a single page and doesn’t know where that story came from. There was not a duplicate page in the initial proposal submitted to the city.

Informed that the city is now saying it did not receive any digital version of Humboldt Made’s proposal by the April 5 deadline, Powell indicated that was distressing.

“I was told by my staff that we had submitted it,” she said.

City staff also misrepresented what happened with Vessel Strategies’ submittal when pointing to it as evidence that Humboldt Made wasn’t the only firm granted a waiver and allowed to submit materials late. While staff repeatedly indicated Vessel Strategies had simply missed the deadline and asked to submit the following Monday, Black said his review indicates Vessel submitted its printed copies of the proposal by deadline Friday but hadn’t uploaded the electronic copy. He said Vessel’s electronic copy was uploaded April 8.

Black said he is drafting a report to present to the city council in closed session Tuesday that will include “the facts and the legal standard against which they must judge” them.

“The legal standard that we’re looking for is did it give one proposer a competitive advantage and, if so, the irregularity would not be considered a minor matter,” he said. "It would put it out of bounds for a waiver.”

Asked directly if he felt staff had willfully misrepresented the situation to the public and the council, Sparks said he did not.

“I really don’t believe there was a willful misrepresentation,” he said. “I think it was unfortunately just a comedy of errors. It seems like one error built upon another.”

Also reached Friday and informed of the Journal’s findings, Bergel said she’s disappointed but doesn’t believe she was lied to.

But Bergel said she’s confused about how she seemingly got incorrect answers to very direct questions posed at the May 21 meeting, and she’s saddened that a process that should have been invigorating — asking Eureka to imagine a best version of itself to put forward to the rest of the country and world — has now been tarnished. She said she still feels like the council has two very good proposals before it, no matter how the process proceeds.

“What I know, what I believe, is that we will do the right thing, whatever that looks like,” she said. “It’s ugly. It’s a real bummer. This was something that was supposed to be fun and was really about bringing our community together. My hope is that, in the end, we’ll get there. But I think we’re going to have to walk through some stuff together first.”