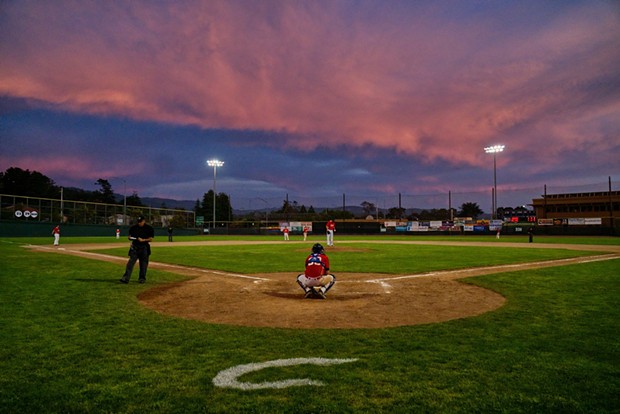 The San Francisco Seals flippered their way into town Tuesday and split a two-game series in almost perfect symmetry.

Tuesday night the Seals got on the board first, second and fourth, and sauntered into a 6-2 victory. Though the Crabs outhit the Seals 8-7, a dearth of extra base hits and a few costly errors put the game out of reach in the fifth inning. It was, to be diplomatic, a major bummer. Damian Henderson continues to hit well, and parked a two-run shot in the sixth inning (his second of the year), so that was cool.

Thankfully, Wednesday evening our boys showed the kind of exoskeletal fortitude for which they are known. The Seals put up a 1-0 lead right out of the gate and the crowd was preparing themselves to endure another whooping.


One of the best things in baseball is when a batter crushes the first pitch he sees and that’s exactly what Bryce Kirk did when he put a languid curve ball onto the roof of the Police Department. This dude is a hitting machine. He hasn’t batted under .350 once this season and he leads the team in both home runs, hits and extra-base hits. And so began the first honest to goodness Crabs game of the season. They put runners in scoring position with no outs, they forced errors, they hit into the gaps and they tallied up a big lead and kept their foot on the Seals’ throat. Dawson Bacho, Koko Figueiredo and Kyle Knell all tallied multiple hits, and six different Crabs crossed home plate in their Wednesday evening 7-2 victory.

Kudos also due to Riley Clearly, who, in his second start, pitched five strong innings and allowed only one run, and Nick Tabura for coming in for his first relief duty and striking out 10 batters. Our pitching lineup has filled out and, though we have one player sporting a stratospheric 59.4 ERA (remember what I said about early season stats?), is beginning to look rather formidable. 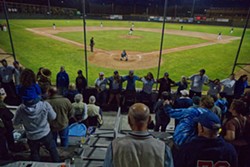 Guys, it felt so good to win. I mean really win. We’re two games under .500, sure, but that’s way better than being three games under .500 and the boys have some momentum heading into The Big Weekend (aka the Oysterfest-Father’s Day Extravaganza aka The 29th annual 48-Hour Arcata Blackout) against the San Luis Obispo Blues. Start drinking water now, folks.

Heckle of the Series
A fairly mellow series, far as shouting aspersions at the opponent goes. Nothing especially riotous or standout. We gotta up our game this weekend, first base line.

Cheers and Jeers
Cheers to the Top Shelf, for always over blanketing the bleachers and leaving me a spot to butt in.

Jeers to the guy who gave a ballpark staffer the finger for no good reason. Jordan is nice, man — don’t be mean to him.

Jeers to the young bucks vaping in the stands. Weeeeaaak.

Cheers to the one kid who fell on his vape and took the boot so all his rule breaking buddies didn’t have to.

One more kick out (and a dozen spared). Bringing the grand total on the year to a tidy five. Early reports suggest that number will double this weekend.

Public Service Announcement: The grandstands are starting to look a little yucky from all the beer and trampled seeds and peanut shells. In dire need of a power wash, says I. And I’d be happy to do it, if the power washer is supplied.